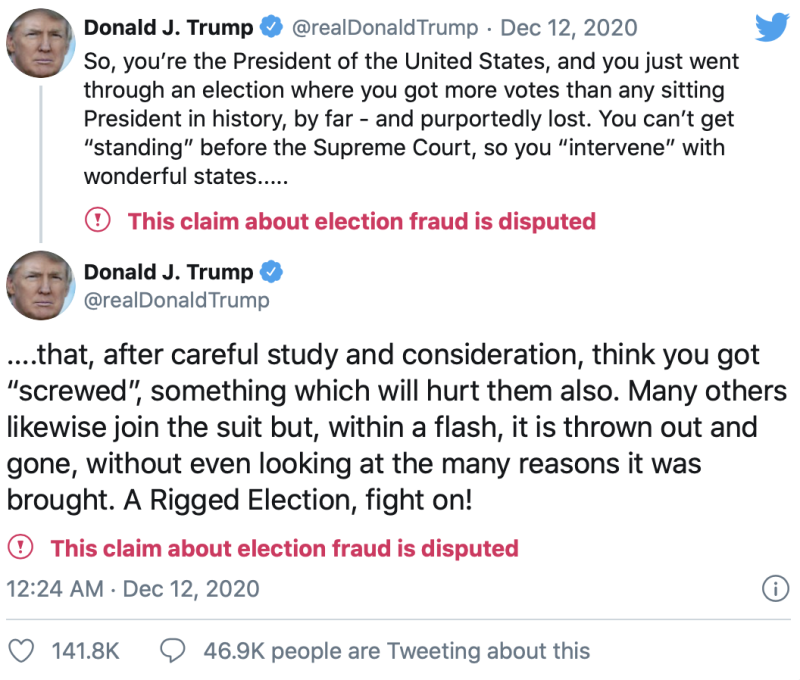 The Supreme Court of the United States rejected the anti-American lawsuit filed by the AG of Texas meant to toss the votes of millions of battleground-state voters for Biden, in order to hand the election to Trump.

The lawsuit by Ken Paxton tried to invalidate the votes in Pennsylvania, Michigan, Georgia and Wisconsin — and

Some 126 House Republicans had signed on to support the suit, a clear attempt at a political coup unprecedented in U.S. history. New Jersey Rep. Bill Pascrell has urged Nancy Pelosi to refuse to seat those 126 on the basis of Reconstruction-era constitutional safeguards against treason.

🚨BREAKING: I’m demanding that the 126 Republicans who have endorsed a malignant lawsuit to overturn the will of the people and undermine our democracy not be seated in Congress. https://t.co/PKMzlSfEjX pic.twitter.com/PLZyyAz7aZ

Upon hearing the news of the SCOTUS smackdown — which stings especially since he installed three of its current members — Trump threw a social media hissy-fit, accusing the justices of displaying no wisdom, no courage in rejecting the patently absurd lawsuit.

He also reportedly skipped a maskless, coronavirus-courting White House holiday party, refusing to come out to greet his assembled guests

Trump was scheduled to attend a holiday party around the time the Supreme Court ruling came down. But around 8:30 p.m., guests were informed that Trump would not be coming down from the residence to speak. https://t.co/RS0mYzIskv