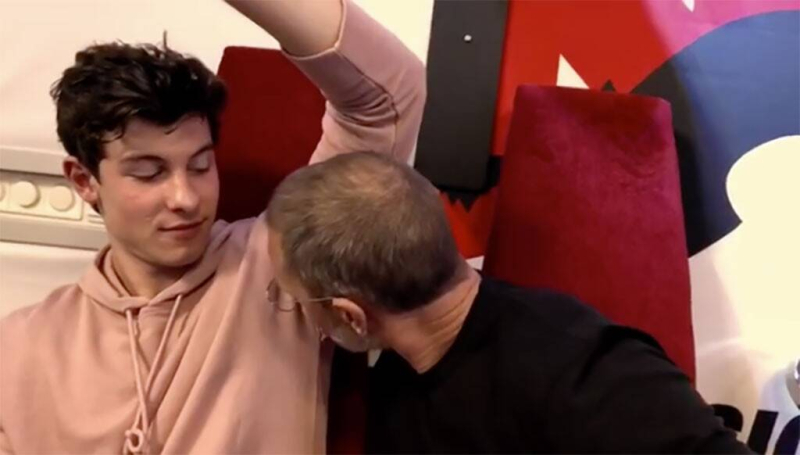 Remember when this interviewer took Shawn's gay-goodwill too far? (Image via video still)

Okay, this whole “I'm not gay, but it'd be okay if I were” tour Shawn Mendes is currently on is no fun anymore.

He has addressed gay rumors yet again, this time on a podcast hosted by, of all people, Dax Shepard, saying:

It was so, so frustrating for me because there were some people in my life that I was very, very close to, who were gay and in the closet. And I felt this real anger for those people. It's such a tricky thing. You want to say, “I'm not gay, but it'd be fine if I was gay — but also there's nothing wrong with being gay, but I'm not.”

He goes on to pre-absolve himself of handling the situation improperly, which is probably a good way to preserve his sanity, even if it should not, perhaps, be so hard to begin with:

I've realized that we just have to stop having to be experts and politicians about it, especially as a famous musician who's a guy. I need to be really fucking messy and say the wrong things and apologize and say the right thing after I apologize and be confused about how to respond when people say I'm gay.

It would appear he has been called gay since his teens (to be fair, he was a teen less than three years ago). He told Shepard he didn't grow up wrestling, but instead grew up getting my hair braided on New Year's Eve:

I had these problems with the way my voice sounded. I'm like, “How do I sit?” I'm always first to cross my legs and sit with a position of this feminine style and I really suffered with that shit.

Well, if he isn't gay, then he sounds like the ideal boyfriend for a girl, but ... he's spending way too much time addressing this, even if we are, too. He isn't the first, nor is he the last, celebrity to inspire this conversation. It shouldn't be weighing so heavily on him, and I don't buy it when people like him say it's hurtful, but it shouldn't be — but what about my good pals who really are closeted and gay?!

He seems like he's dying to stare people down and snarl, “You wish!” Maybe he should try that, because we should all lighten up on this topic all the way around.