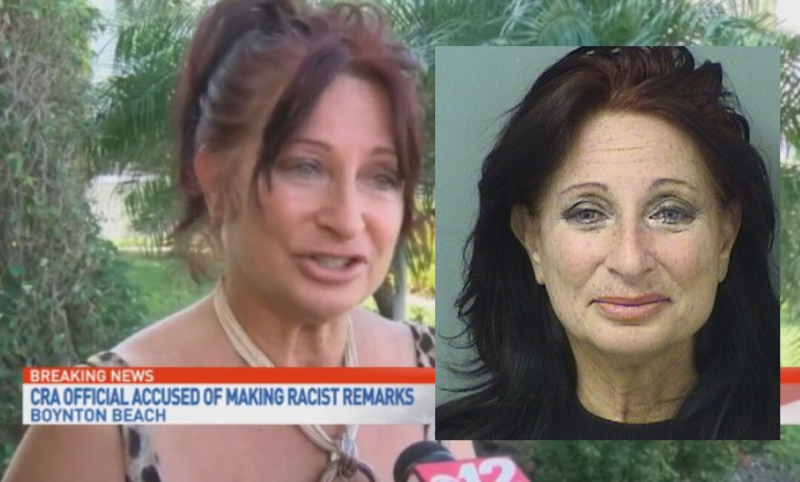 This hardcore racist blamed a “lynch mob” when she was pressured out of a volunteer role. (Images via video still & mug shot)

CBS12: More about Cindy Falco-DiCorrado, the so-called Animal-Print Karen who was arrested for refusing to wear a mask inside a Florida bagel shop. Turns out her past is as checkered as her pants were patterned — she's the Boynton Beach, Florida, volunteer Community Redevelopment Agency Advisory Board when she told a resident to “speak better English” and told Black residents they were “lucky we brought you over as slaves, or else you'd be deported, too.” She said she didn't mean nothin' by it.

WAPO: Small town Aberdeen, Maryland, is dealing with the knowledge that one of its own — 23-year-old Christian Trabert — was proudly part of the insurrection at the Capitol. Not only is he a local, he's the police chief's son. That doesn't exactly feel like a coincidence. The behavior of the town's mayor and its police chief in the wake of the native son's involvement in insurrection has been chilling.

TMZ: Are DC cops too tired and stressed to be of use in any further coup attempts? This employee apologized after barking at them to leave for being gay. (Image via video still)

NEWS12: A Bronx couple says they were kicked out of a Mott Haven restaurant simply for being gay.

HUFF POST: Kinda odd that German Chancellor Angela Merkel feels Twitter went too far in banning Trump — her country bans words. (And with good reason! The same reason I don't want to hear Germany's advice on how to contain fascism.)

TIKTOK: I find it unfathomable that so many people still haven't seen the utterly insane video from 20 years ago of Donald Trump motorboating Rudy Giuliani in drag, but a guy uploaded it to TikTok and suddenly everyone's shocked. Have you not seen this a million times already??? If not, you'll enjoy:

How is this NOT the weirdest thing I’ve ever see Rudy Giuliani do?

OUT: Apparently, PrEP use in the U.S. among gay and bisexual men is low, which I guess means all your Grindr hook-ups are just lying. Does this mean they also don't already have COVID-19 antibodies?!

BOSGUY: Perfect amount of muscle? Is there any such thing?

INSTAGRAM: More from the upcoming book of unseen Madonna shots. How this photographer got such AMAZING images in a quickie promo shoot — then only published a handful — I'll never know:

Posted by DrownedMadonna.com on Saturday, January 16, 2021