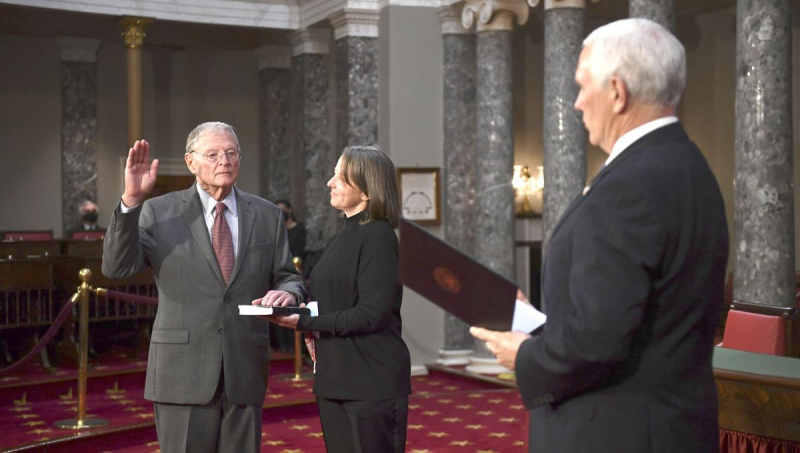 Inhofe being sworn in by Pence (Image via video still)

After all the things I've done for him!

CNN: Holy shit! William Barr, Trump's ex-AG, accused Trump of “orchestrating a mob to pressure Congress,” calling it “a betrayal of his office.” 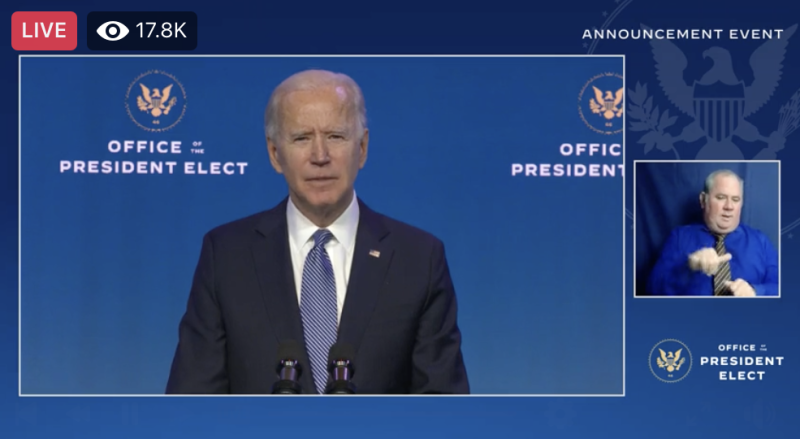 FACEBOOK: President-elect Biden has made new, progressive announcements of his picks for various offices, and importantly termed those involved in Wednesday's insurrection as “domestic terrorists.” Among his picks, he has tapped Rhode Island Gov. Gina Raimondo to serve as Secretary of Commerce and Boston Mayor Marty Walsh (a top union leader in the past) as Secretary of Labor. 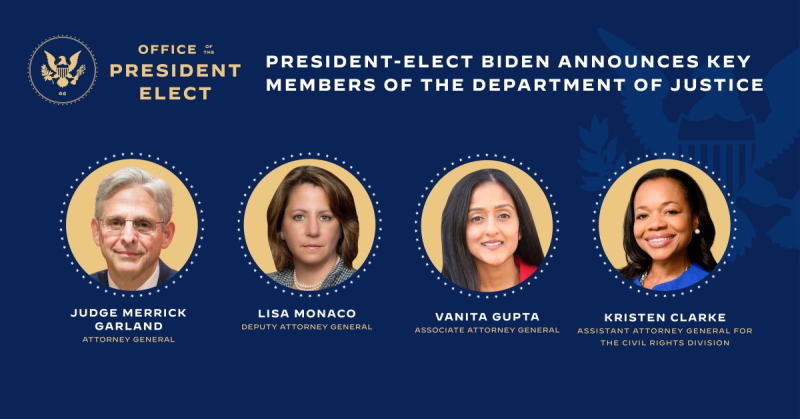 He also made his pick of Merrick Garland as AG official, and a clearly moved Garland spoke at length about his career and his gratitude. Also announced: Lisa Monaco as Deputy Attorney General, Vanita Gupta as Associate Attorney General and Kristen Clarke as Assistant General for the Civil Rights Division.

WAPO: Bad news — Mitch McConnell's wife, Elaine Chao, is resigning as Transportation Secretary. Though this would normally be good news, the fact that a Cabinet member is resigning means there is not enough support among them to get rid of Trump via the 25th Amendment. (Many had demanded Pence and the Cabinet invoke that Amendment, including Republican Rep. Adam Kinzinger of Illinois and every prominent sitting Democrat you can think of, right up to and including incoming Senate Majority Leader Chuck Schumer.) We are stuck with a madman for another 13 days. She said, in an email to staff:

Yesterday, our country experienced a traumatic and entirely avoidable event as supporters of the President stormed the Capitol building following a rally he addressed. As I’m sure is the case with many of you, it has deeply troubled me in a way that I simply cannot set aside.

Republican lawmaker who had just been sworn in as a member of the House of Delegates livestreamed his participation in the insurrection at the Capitol, proudly proclaiming, “Patriots inside, baby!” and shouting — his name.

PITCHFORK: Obscure musicians Ariel Pink (who once lied about working with Madonna and got smacked the fuck down for it) and John Maus were both spotted at the insurrection on the Capitol Wednesday. Pink performed, and now says he was just supporting Trump, and didn't join the riot. Maus ... is radio silent.

RELATED: My skeptical response to Terri Nunn basically saying she'd been stupid to play Mar-a-Lago and was sorry made The New York Daily News.

This is worth your time. Turn up the volume and please share. Thank you, @JoeNBC, for being the voice we need right now. pic.twitter.com/YnojyPYRTA

ADVOCATE: Great header — “The Gay Titanic Sank; Let the Era of Selfishness Go with It.”

NDTV: Fashion designer Saishe Shinde (formerly Swapnil Shinde) who has dressed many celebrated Indian figures, has come out as trans:

It was only in my early 20s ... where I found the courage to accept my truth; I truly bloomed. I spent the next few years believing that I was attracted to men because I was gay, but it was only 6 years ago that I finally accepted to myself, and today that I accept to you. I'm not a gay man. I am a Transwoman.

INSTAGRAM (FOLLOWS APPRECIATED): Today's birthdays include Nicolas Cage, who has been surprisingly hot at various times: