Daughter Calls Out White Mom Who Got Into It With A Black Woman In DC: THIS YOU, MOM? Comments (0) 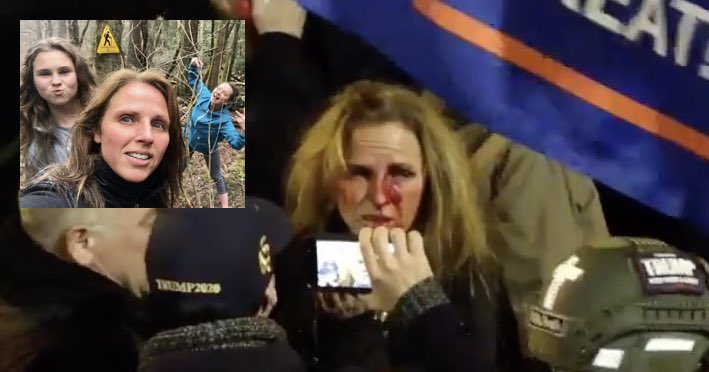 Nothin' to see here, just a young woman calling out her white mom for getting into a melee with a Black woman after having tsk-tsked BLM rallies as potentially violent ...

Helena Duke saw an interesting video making the rounds on Twitter and had to comment — but for a very special reason.

Turns out the video, showing white Trumper instigating violence by grabbing at the face or face mask or phone of a Black woman, was of her own mom.

hi mom remember the time you told me I shouldn’t go to BLM protests bc they could get violent...this you? https://t.co/9ZkbAq0ehO

Better yet, her mom is such a right-wing nut she kicked Helena out of the house for having attended BLM rallies, which she warned could get violent.

she really kicked me out of the house for going to blm protests...I- Karmas a b*tch

This kid is alright.

Here's the mom reporting a “Black girl” hit her in the face:

Heres the other part lol pic.twitter.com/daxdMgMEzO

UPDATE: The Black woman is not a D.C. cop, but a bystander who said a group of white people had been harassing her and attempting to take things that belonged to her, which looks a lot like what happens in the video. More here.