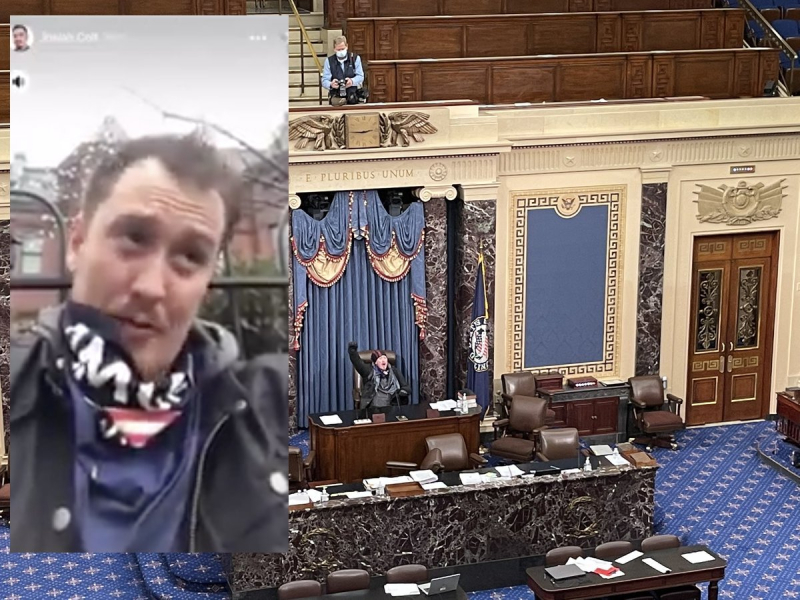 He didn't mean no harm. (Images via video stills)

Josiah Colt, a Boise, Idaho, man, is the person we all saw dangling over the Senate chamber in tactical gear, just before he dropped in and plopped down on Mike Pence's (not Nancy Pelosi's) chair.

Even though he stormed the U.S. Capitol with an intent to disrupt our democracy — and would've done God knows what had he encountered a Congress critter — once he was identified and put on blast, he got real sorry real fast.

In a statement, he said:

I love America, I love the people, I didn’t hurt anyone and I didn’t cause any damage in the Chamber. I got caught up in the moment and when I saw the door to to the Chamber open, I walked in, hopped down, and sat on the chair. I said my peace then I helped a gentlemen get to safety that was injured then left.

While in the Chamber I told the other protesters that this is a sacred place and not to not do any damage. Some of them wanted to trash the place and steal stuff but I told them not to and to leave everything in it’s place. We’re still on sacred ground.

And sincerely apologize to the American people. I recognize my actions that have brought shame upon myself, my family, my friends, and my beautiful country. In the moment I thought I was doing the right thing. I realize now that my actions were in appropriate and I beg for forgiveness from America and my home state of Idaho.

My intention wasn’t to put a stain on our great Country’s Democratic process.

Since the statement came out, he's deleted all his social media and lawyered up, which is a good idea — because this statement is utter bullshit. He defiled the chamber and would've done worse had he had cover from fellow insurrectionists. Shame on him and his family, and I hope he will spent years in prison. After all, he has confessed:

Josiah Colt got online and ADMITTED EVERYTHING.

Here, an old classmate expresses personal disappointment, but correctly points out her feelings don't matter — he broke the law. Broke several of 'em.

His old GF wasn't thrilled, either:

January 6th, 2021 was the date I learned my high school boyfriend grew up and became a terrorist. https://t.co/YoWHzYJ2l8 pic.twitter.com/CML9kp1sMr