BARB & STAR GO TO VISTA DEL MAR: A Vacation From Your Brain Comments (0) 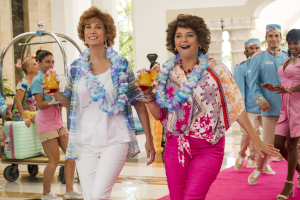 Barb & Star Go to Vista Del Mar, starring Kristen Wiig and Annie Mumolo, is an unapologetically campy, absurdist romp that reminded me of something like a technicolor Young Frankenstein.

In the case of the Mel Brooks classic, though, the well-worn clichés of the classic horror genre provided the language of the comedy, whereas Barb & Star lampoons self-actualizing, woman-centric comedies, movies like Muriel's Wedding, and adds a healthy dose of the kinds of ridiculous comedies that were in theaters when the women were kids — Airplane! comes to mind, though the jokes are less dependent on one-liners than on Wiig's signature character-driven work.

Wiig (Star) and her comedy partner Mumolo (Barb) — the duo behind one of the funniest films of the past 10 years, Bridesmaids — here indulge themselves at every turn, and it's up to you whether to go with it or pick it apart as their Nebraskan superhick characters impulsively go on vacation to the mythical Florida island of Vista Del Mar, unwittingly stumbling into the murderous plan of a Dr. Evil-esque super villain, also played by Wiig.

The film, directed by Josh Greenbaum, gives Jamie Dornan a chance to be goofy (while still doffing his shirt), and features committed, over-the-top appearances by the likes of Damon Wayans and Andy Garcia.

It runs long and is its own biggest fan, but if Barb & Star is not for you, it's probably on you. I suspect most viewers — especially where we are, in February 2021, will be satisfied to be presented with something that not only doesn't demand to be taken seriously, but that refuses to provide more than some guilt-free guffaws.

Barb & Star Go to Vista Del Mar is on VOD.