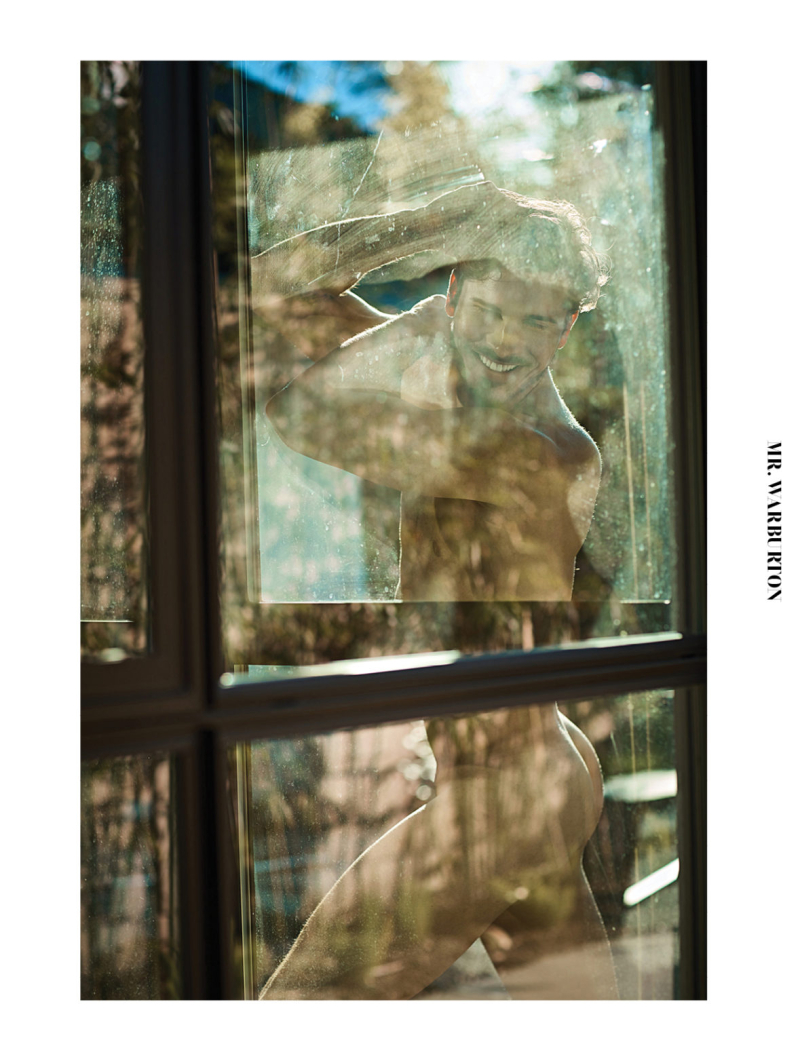 MR. WARBURTON: I know some in the LGBTQ community react negatively to gay-baiting, but I don't understand that complaint. For decades, we've fought to be taken seriously, often pointing out our economic viability, and now that we have public figures and businesses taking us up on the offer, some among us are sniffing at being marketed to? That's absurd! If someone isn't pretending to be LGBTQ, then we're all grown-ups and we should know that having a cute straight guy lend his support while shirtless is a positive thing, as long as he walks the walk as well as talking the talk.

Case in point: Gorgeous Gleb Savchenko of Dancing with the Stars is taking it all off for Mr. Warburton, and at the same time is expressing his full-throated support for same-sex dances on the show. An ally with no pants? Win/win/win. (Above image supplied by Mr. Warburton, taken by Rowan Daly.) 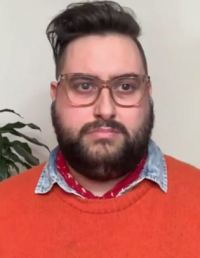 known for lobbing softballs, is under fire for even talking to Joey Gugliemelli aka Sherry Pie, one year after it was discovered that he'd tricked many people, including close friends, into sexually abusive situations, among other wrongdoings. Gugliemelli's most outspoken victim, Ben Shimkus, deplored the existence of any interview with Gugliemelli, as did many others, including RuPaul's Drag Race alums. In response, Hall retorted:

I’ve been a reporter for 30 years. I’ve interviewed rapists, I’ve interviewed murderers, I remember interviewing a woman in prison who murdered a child she was trusted to care for. It’s not giving away your platform. It’s called an interview, and people who do bad things are interviewed. R. Kelly comes to mind. That’s just one person I’m thinking who was recently interviewed on multiple platforms and shared all over social media.

Isn't this valid? The victims were heard — though I think having them on her show first would have been preferable — via the news reports that documented their stories. And their stories were true, and nobody is casting doubt on them. Even Gugliemelli, in what turned out to be a short and unengrossing appearance, said:

I first want to say that there are no “allegations.” I admit to my wrongdoings and horrible behavior. I don’t know if … more [victims] will come forward. I’m here to apologize, and I want to make that very clear. I understand now, in lieu of this year, how much pain I’ve caused. I just want to let the victims know, and everyone else know, that I am so sorry. I can’t even begin to imagine the pain and the trauma that I’ve caused. That’s really all I have to say.

He went on to reference his mental illness and poor childhood, and confirmed nobody has approached him about charges. I'm not sure, but it would appear — at least so far — some of his victims want to punish him not in court, but by denying him any sort of media forgiveness/show-biz comeback. I'm not sure how they would feel about him being hired out of show business to support himself. In his initial coming-out post, Shimkus concluded:

Sherry will be a blast to watch on the show. I hope that the success she will undoubtedly have allows her to break free from using internet personas to objectifying other gay men.

Since then, his stance has hardened considerably. Sherry is a uniquely unsympathetic figure, and there is no blueprint for how to resolve issues like these anymore, it seems.

I'd love to hear your thoughts.

SAN FRANCISCO GATE: Christopher Woitel, the San Francisco man missing for over a month, has been found dead in his apartment building after a second search. There is no information yet as to cause of death, and no explanation as to how a corpse could've been overlooked earlier.

.@StaceyPlaskett to @TheView: “[Mitch McConnell] made a calculation that he could not get the majority of his own caucus of Republican senators to come over and convict and therefore he couldn’t do it because he would not be able to maintain his position as minority leader.” pic.twitter.com/t6xWzr46UG

This is a major flaw in our system — that the jurors are politically craven individuals and are, as in this case, tied to the party of the man or woman on trial. 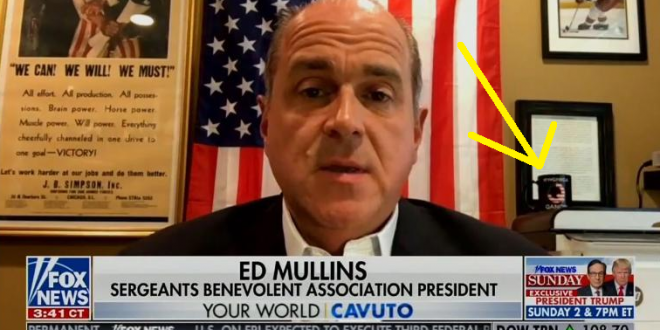 If there are so many good cops out there, why are they all represented by the worst of them? (Image via Fox News)

JOE.MY.GOD.: Again, fuck the police — and most especially, fuck their union chiefs, all of whom are monstrous. the NYPD union head Ed Mullins called newly elected gay Rep. Ritchie Torres (D-New York) a “first-class whore.” Mullins is a QAnon supporter, yet is still in place as the representative of New York City's police force Disgraceful.

NYT: Amy Cooper, one of the most famous Karens of all time — the white lady who called the cops on Black bird-watcher Christian Cooper (no relation) in Central Park — has had her charges dropped after completing a program about how to avoid racial bias. Sounds easy! 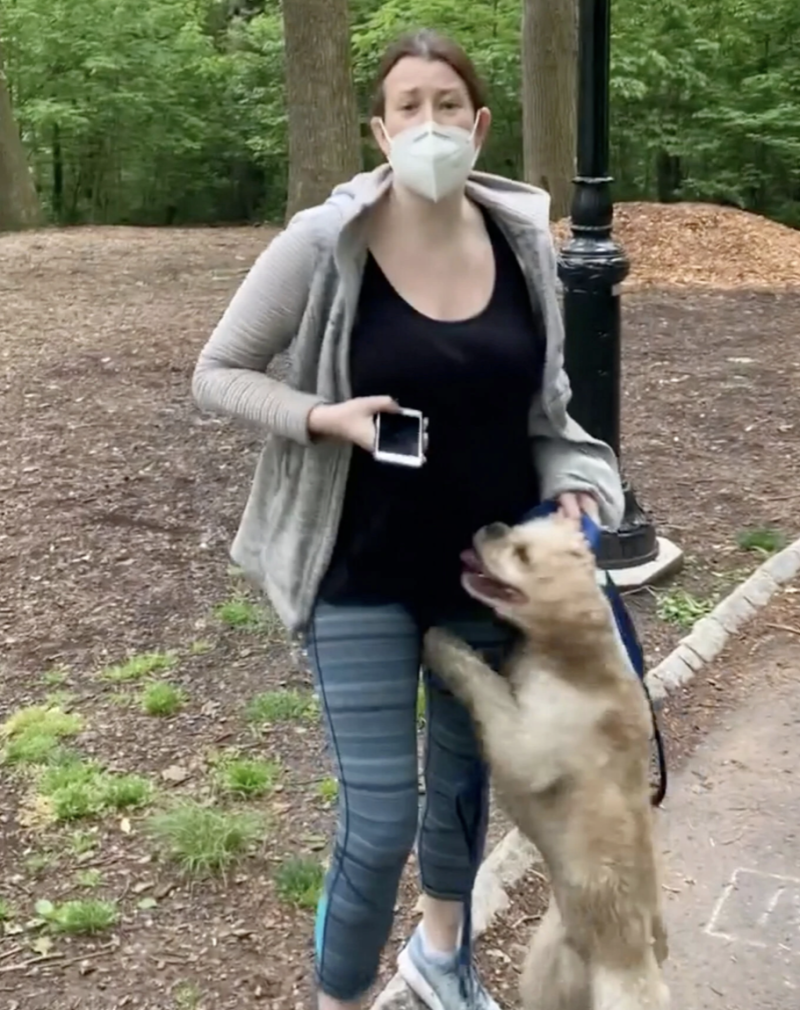 Her call could have led to a man being attacked or killed by the always-unreliable NYPD. (Image via Christian Cooper)