BELOW: Keep reading for a contrarian POV on It's a Sin, a Florida Karen dragging Kamala into her battles, Trump's tax returns hit the Manhattan D.A. and more ... 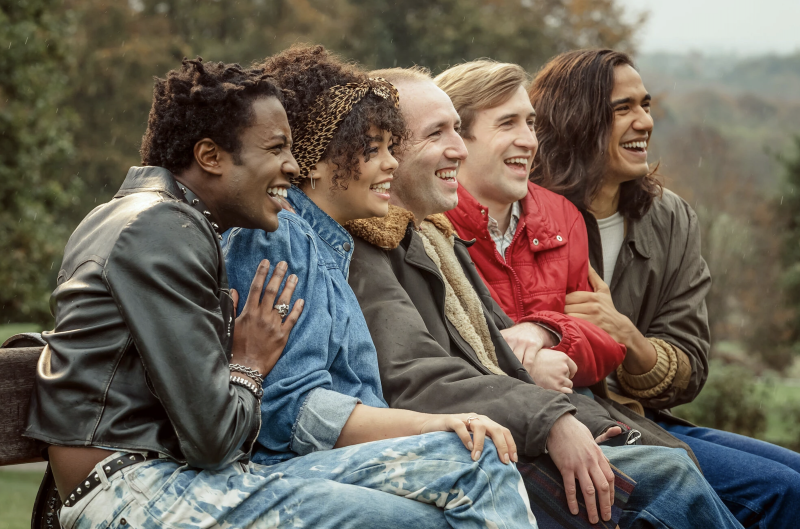 A group of friends, just before the plague. (Image via HBO Hax)

L.A. TIMES: Brian Mullins' outlier pan of It's a Sin is worth reading even if you loved the series (as I did, though I despised episode 5 for some of the reasons he articulates). His comments about Colin's story arc ring true to me, even though it was the part of the series that touched me the most deeply; even as I watched his story unfolding, I felt like maybe it was dramatically effective but questionable regarding messaging.

That said, I highly recommend episodes 1-4, and I guess episode 5 seems to be splitting some viewers, with most finding it knock-down, drag-out effective and people like me finding it something I wish had been knocked down and dragged out.

TMZ: Trump was jokin' around at a useless ceremony to hand golf pros medals less than 24 hours after trying to get Pence assassinated.

CNN: Rep. Marjorie Taylor Greene (R-Georgia) is such trash she posted a huge anti-trans sign in the halls of Congress (the place she tried to help get destroyed via riot) because her neighbor there is respectfully displaying a trans flag.

Meanwhile, a close friend of Taylor Greene's, Anthony Aguero, was among the Capitol rioters. Hm.

TWITTER: Whoever this bitch is, she and her pal need to be deprived of any means of making a living for the rest of their miserable lives:

This happened today, 2/24/2021 in orlando, outside the Nordstrom Rack on Conroy Road.

Does anyone know this lady? She said the Kamala comment to my daughter who is Black #orlando #trump #trumpers pic.twitter.com/hfDUfWfS1L

KENNETH IN THE (212): The astronaut's wife has been fired for her love of Gab and Parler. It's worth reading.

HUFF POST: Biden' three new Board of Governor nominee might spell the beginning of the end for politically poisonous Louis DeJoy at the USPS.

NYT: The most consequential stripper of whom you've never heard has died.

NEWSWEEK: Sen. John Thune (R-South Dakota) is against a $15 minimum wage because he did just fine earning $6 an hour as a kid. Adjusted for inflation, that is ... $24. Your move, kid.

The Nies had it! (GIF via GIPHY)

EW: First peek at the reunion of the original The Real World cast.

EXTRATV: Someone shot Lady Gaga's dog walker and stole two of her three dogs. The dog walker is expected to survive, and Gaga — shooting a movie in Italy — is offering a $500,000 reward ... not for info on the shooter, but for the dogs' return. P.S. Shot in the chest, the dog walker STILL managed to save a third dog from kidnapping.

All the kibble in the world (Images via Instagram)