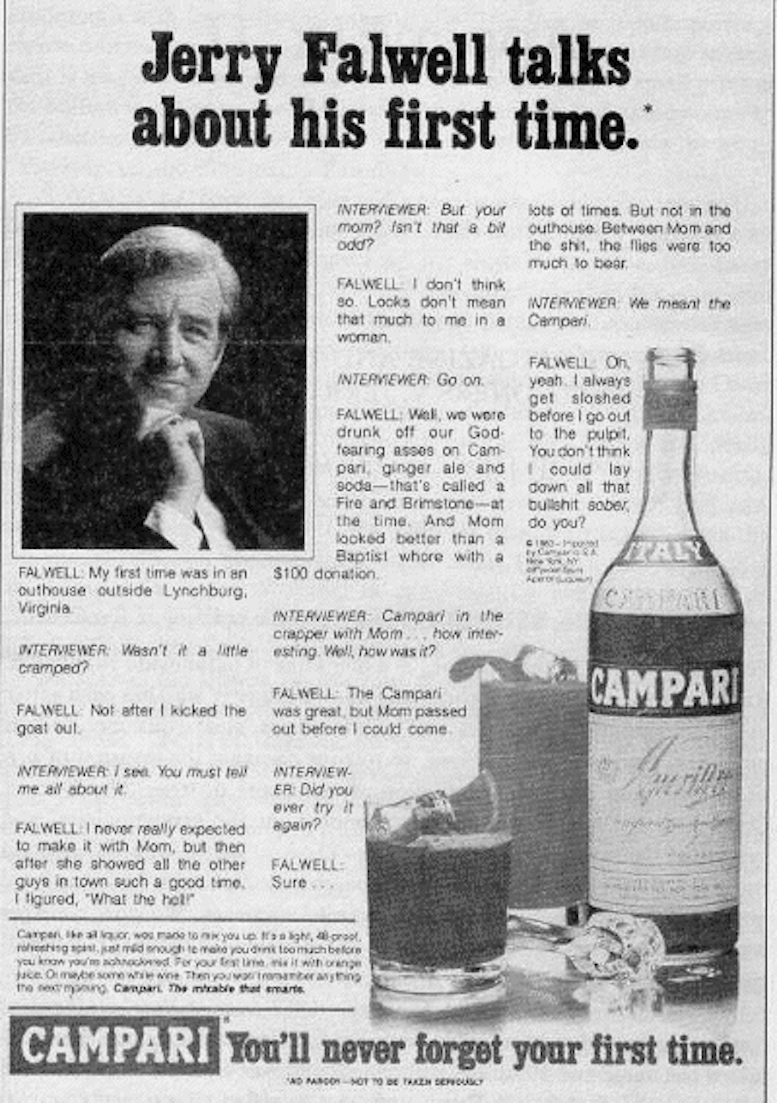 “Ad parody — not to be taken seriously” ... yet it went to the SCOTUS! (Image via Hustler)

Flynt was a true American original, an inspiration for those who value free speech — even smutty free speech — and an example of a person who literally put his life on the line for the pursuit of happiness.

When I was a kid, my cousin would sneak 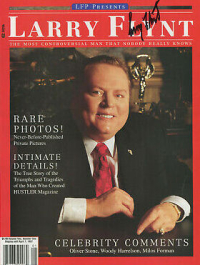 Flynt was born in Kentucky, and made his fortune in Ohio, where he built a string of nudie bars called The Hustler Club in the late '60s. Fortuitously, he decided to published a newsletter regarding the joints, and it was the popularity of the newsletter — even as a recession tanked his clubs — that led him to conceive of a national sex magazine.

Unlike hoity-toity Playboy and Penthouse, with their out-of-your-league babes, Flynt's Hustler would have hot women who looked and acted far more natural. You could smell the layouts in Hustler, which was aimed at blue-collar men.

Along with his penchant for extreme sex, Flynt got off on freedom of speech. Nothing was off-limits for him, so Hustler became the first national, newsstand magazine to show nude women spreading their legs, and it sold a million copies the month he spent $18,000 for pap pics of ex-First Lady Jackie O sunbathing in the nude. Crass? Yes. Lucrative? Even more so.

Though he fought many court cases over obscenity and other charges, Larry really went for it when it came to needling televangelist Jerry Falwell. In 1983, he published a clearly fake interview with Falwell, in which the huckster bragged about having sex — with his own mom! Falwell was livid and sued him. In 1988, the Supreme Court decided 8-0 in favor of Hustler's right to free speech regarding a parody of that nature.

Apparently, Flynt and Falwell were cordial after that, and spoke on occasion.

In 1996, Falwell reached peak relevance as the subject of the sublime film The People vs. Larry Flynt. Directed by Milos Forman, it starred Woody Harrelson as Flynt and Courtney Love as his doomed wife Althea Leasure. Love was tipped for a major movie career after that — but it never materialized. In fact, though she had seemed a shoo-in for an Oscar nomination, the nominations in 1997 were highly competitive (Madonna in Evita and Debbie Reynolds in Mother were similarly overlooked). Still, the movie — also nominated for Best Director — was highly regarded.

Since then, Flynt had been as outspoken as ever, especially for a guy who caught a bullet once already.

He wasn't a saint, but he was a true original, and he died filthy rich after doing exactly as he pleased his whole life. Thankfully, a lot of that included spending time and money testing limits so the rest of us didn't have to.