ABOVE: Joe Lando, 59, is actually helping Jane Seymour sell scarves like this!

You must be this tall to ride this ride. (GIF via GIPHY)

SNL: SNL was pretty good last night — Nick Jonas made himself available for a larger-than-usual number of sketches, plus sang. But the above GIF, in the dumbest sketch, was still the highlight.

OUT: A gay couple in 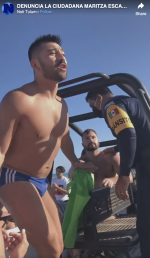 Tulum — you know, the place where all the sugar-baby gays and credit-card queens have flocked throughout the pandemic — were nearly arrested by armed cops for daring to kiss on the beach. IN TULUM. Which is chock-full of homosexuals.

THE HILL: The, um, artist who created the so-called Golden Calf Trump statue (1) was a youth pastor, and rejects the obvious fact that it's a Biblical false idol, and (2) created it in Mexico.

JOE.MY.GOD.: A second aide — a progressive with an interest in getting rid of Cuomo, which complicates reception of her story — is accusing New York Gov. Andrew Cuomo of unwanted sexual talk. In a nutshell, she says he asked her about her sex life and she believed he wanted to sleep with her. She complained, an investigation happened, she signed off on it, and now she has remorse for letting sleeping dogs lie. Is the timing ever not suspicious? Can't it ever not be suspicious? Anyway, time will tell if she is another nail in Cuomo's coffin (he is hated by the left and the right, only really liked by more centrist voters, who are the majority), or if her story will fall apart like Tara Reade's.

YOUTUBE: The young woman who sang “The Star-Spangled Banner” at CPAC truly, 100%, can not sing — and you love to hear it: