Would she fare any better in a Pop Hall of Fame? (GIF via GIPHY)

The always-controversial Rock and Roll Hall of Fame has announced its 16 nominees for inclusion this year, and in spite of being eligible for many years, Pat Benatar has been snubbed again.

On the bright side, the Go-Go's 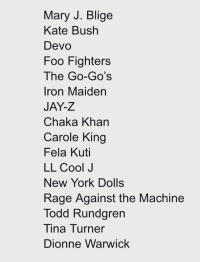 I wonder which five will make the cut? How do you deny Tina Turner? She seems a shoo-in.

Aside from her, I would think Todd Rundgren and Iron Maiden are locks due to their rock cred and longevity in the biz, but LL Cool J is a phenom, having been honored by the Kennedy Center four years ago, among many other honors. He's a superstar on the list.

And hello, Carole King is king.

But will they really be able to resist crowning JAY-Z, who would show up with his wife? And Dionne Warwick, via social media, is newly relevant again.

My own taste would include Kate Bush, the Go-Go's, Carole King, Tina Turner and Chaka Khan. My predictions? I'm going to take a stab at: LL Cool J, Iron Maiden, Tina Turner, Carole King and Rage Against the Machine.