ABOVE: Art that can be enjoyed by anyone!

BELOW: Keep reading for Billy Eichner's rom-com, passage of the American Rescue Act and more ... 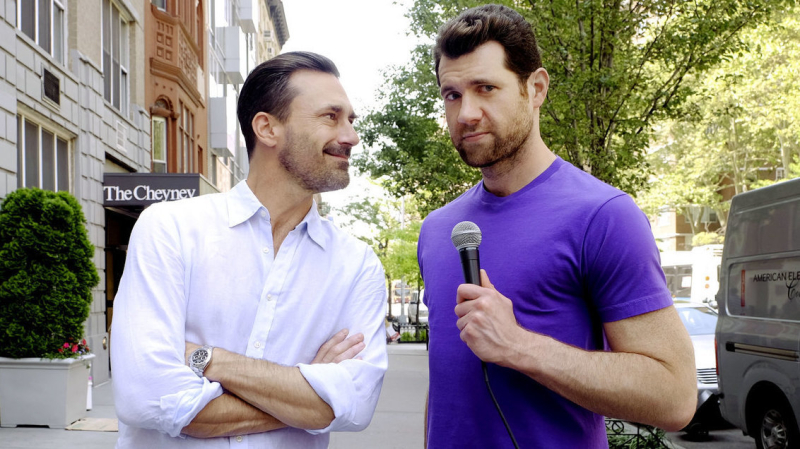 No co-star yet, but ... Jon Hamm's right there! (Image via Turner Entertainment Networks)

SCREEN RANT: It seems like this has already happened, but it hasn't — the first gay rom-com from a major studio is coming to us soon via Billy Eichner, who will write Bros for Universal.

TWITTER: Odious Sen. Joe Manchin (D-West Virginia), after holding up the vote and forcing concessions that will remove some money from the pockets of people who really need it, finally did vote in favor of Joe Biden's American Rescue Plan.

However, Manchin also voted with the GOP on an amendment that would deny trans kids the right to play sports on teams that match their gender ID. He was the only Dem to vote that way, and the only reason that hateful amendment didn't pass is that Republican Lisa Murkowski of Alaska voted against it.

Republicans introduced an amendment that was simply an attempt to discriminate against transgender students.

My response: For the love of God, can't we just have a little bit of heart & compassion in this world for someone who doesn't look or live exactly like you? #LetKidsPlay pic.twitter.com/7mLTx4FfUZ

Sen. Patty Murray (D-Washington) stood up for trans kids, imploring the Senate to think how discriminatory that amendment would be. It fell on deaf ears.

DEADLINE: Since I have been seeing insane people happily seated indoors at restaurants prior to getting their vaccinations, I guess I'm not surprised that other insane people are happily seated inside movie theaters, too — NYC reopened its cineplexes, and box office is booming. It's our version of spring break, yet also feels like those people who jubilantly went around inside pharmacies licking things when COVID-19 was new.

INSTAGRAM: Amanda Gorman reports she was racially profiled simply for trying to get into her home. A security guard decided she “looked suspicious”:

EXTRATV: Tiger Woods had no memory of driving after his near-fatal SUV crash.

TWITTER: My mind is blown that anyone, anywhere freestyles this: