Hard Truths: A Review Of The Sex Doc A SEXPLANATION Comments (0) 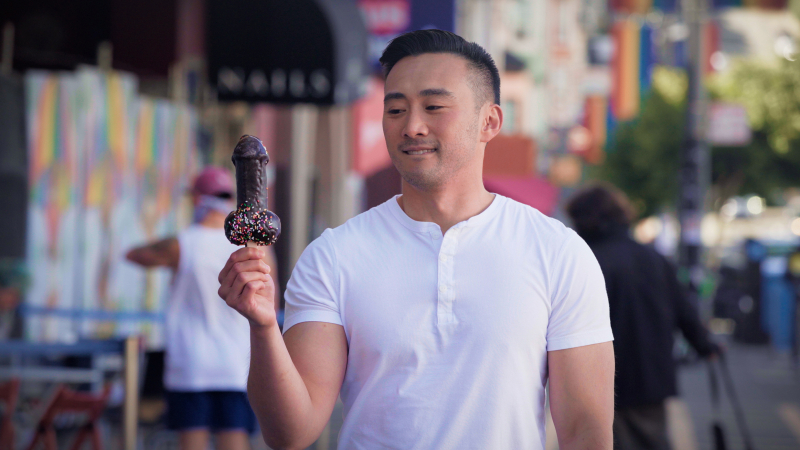 Alex Liu worries about his taboo fantasies — which had my attention! (Image via Herra Productions)

I had a wonderful time watching the cheerful doc A Sexplanation, which is not the one about Britney Spears, but which probably helps us to understand why she was mocked back in the day: America, in particular, has a passionate love and hate for all things sexual. We crave anything that turns us on, but tend to resent or fear anything that turns us on a little too much.

Sex is both our driving force and something we dismiss, belittle and devalue — all the better to indulge in it secretly, and without judgment from others.

A Sexplanation director and narrator Alex Liu sets out to demystify sex, inspired by his gay teenage compulsion/repulsion, which had driven him to thoughts of suicide in spite of coming from a loving home. His mission is accomplished, aided by both his open-minded approach and his residual discomfort, the latter of which serves to make him a sort of everyman of the orgasm.

Liu interviews his adorable, good-humored parents, who simply never spoke to him about sex, and also seeks out various sexperts, ultimately capturing on film a lengthy definition of sex offered by Kristen Gilbert, a professor who works with young people, though a close-second winning definition is actually offered by a Jesuit priest.

I fell hard for the charming — and, yes, sexy — Liu, who in a just world will soon be fielding offers to host TV projects in the wake of this, and completely identified with being a sexual gay man who nonetheless retains a Midwestern puritanical streak in spite of the things I've seen and the people I've done.

It isn't as hands-on and dirty as a classic in the genre, Marc Huestis's Sex Is ... (1993), but the power-bottom line is: A Sexplanation, which is enriched by smart graphics, is a terrific conversation-starter for adults and mature teens, a film that urges us to “feel good about pleasure,” to learn about our bodies and to get the fuck over how we (secretly) want to fuck once and for all.

A Sexplanation is beginning to appear at film fests — click here to find out how to watch.

Check out the trailer: