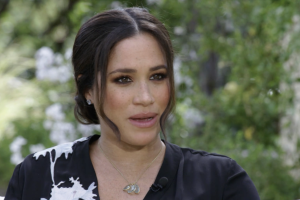 to be remarkably empathetic and forthright and modern in her explosive sit-down with Oprah Winfrey. The seasoned interviewer seemed, at times, gobsmacked by what Meghan and Harry were telling her, including:

√ Markle was, at five months pregnant, suicidal — and disallowed by the Palace from seeking treatment.

√ Contrary to tabloid reports, Meghan never made Kate Middleton cry, but Kate did make Meghan cry. (For which she apologized and was forgiven.)

√ The only reason the couple could afford to leave the royals was the money bequeathed to Harry by his late mom, Princess Diana, who he said he believed would have supported him were she alive today.

√ Someone in the royal family discussed just how dark the couple's child (Archie) would be when he was born. They wouldn't say who. I think it's Prince Philip, who has racial issues in his past, but many commenters on Twitter think it's more likely Charles or even William, because the couple said revealing the name would be “damaging” and that story wouldn't be very damaging to a 99-year-old man.

I continue to be amazed that so many Americans are so dazzled by and loyal to the monarchy, and that they are lashing out at Meghan. Even some Diana fans reject comparisons between the two, when to me it feels like history eerily repeating — only this time, the woman who bucked the family adds being born biracial to her long list of perceived shortcomings.