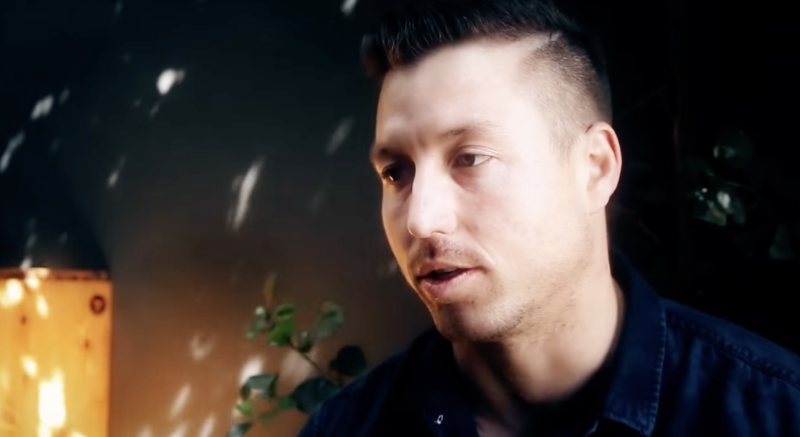 Michael Blevins, a close personal friend of actor Henry Cavill's who has trained him since 2011, used Instagram Stories to argue against the COVID-19 vaccine and mock masks, leaning on his belief that the main reason the virus has been so deadly — well over a million killed worldwide — is because too many of you are fat, fat, fat.

For a guy whose mission statement seems to be that marketing is suspect (“anything that is required for life to continue does not need marketing”), it is perhaps a bit on the money for a professional trainer to blame the severity of a pandemic on being out of shape. 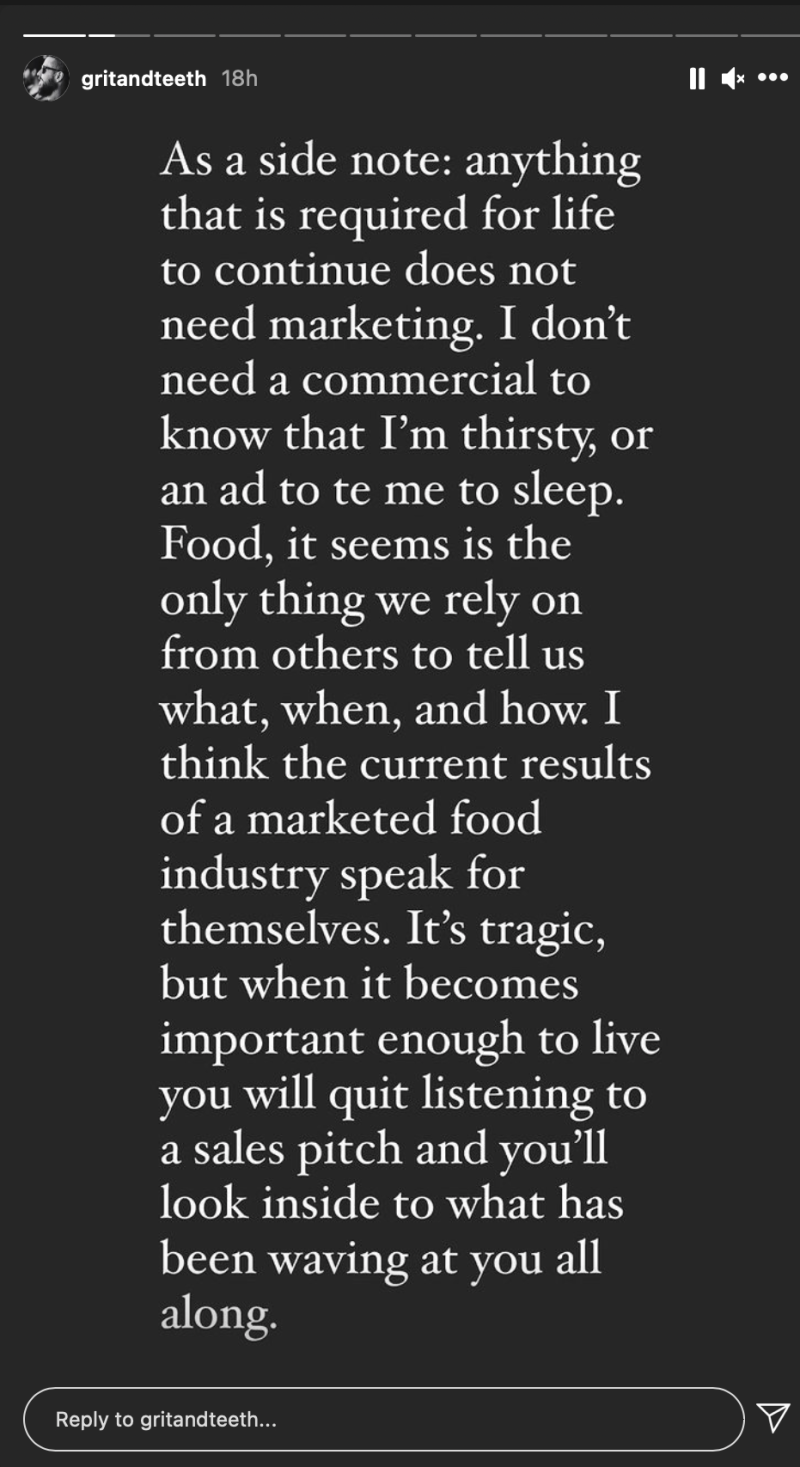 “Don't fall prey to marketing,” he marketed. (Image via Instagram)

Obesity is clearly one risk factor when it 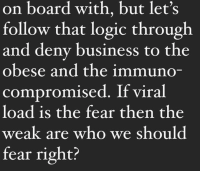 comes to having a tough time with COVID-19, as are many other underlying conditions, including asthma, previous bouts of cancer, kidney dysfunction and age — I wonder how many of those things Blevins would similarly categorize as being one's own fault, and one's own problem?

It makes you wonder what he would say about, just for one hypothetical example, HIV transmission?

Oops, he already answered that, saying if businesses discriminate against non-vaccinated people, why not discriminate obese people — and the immunocompromised? 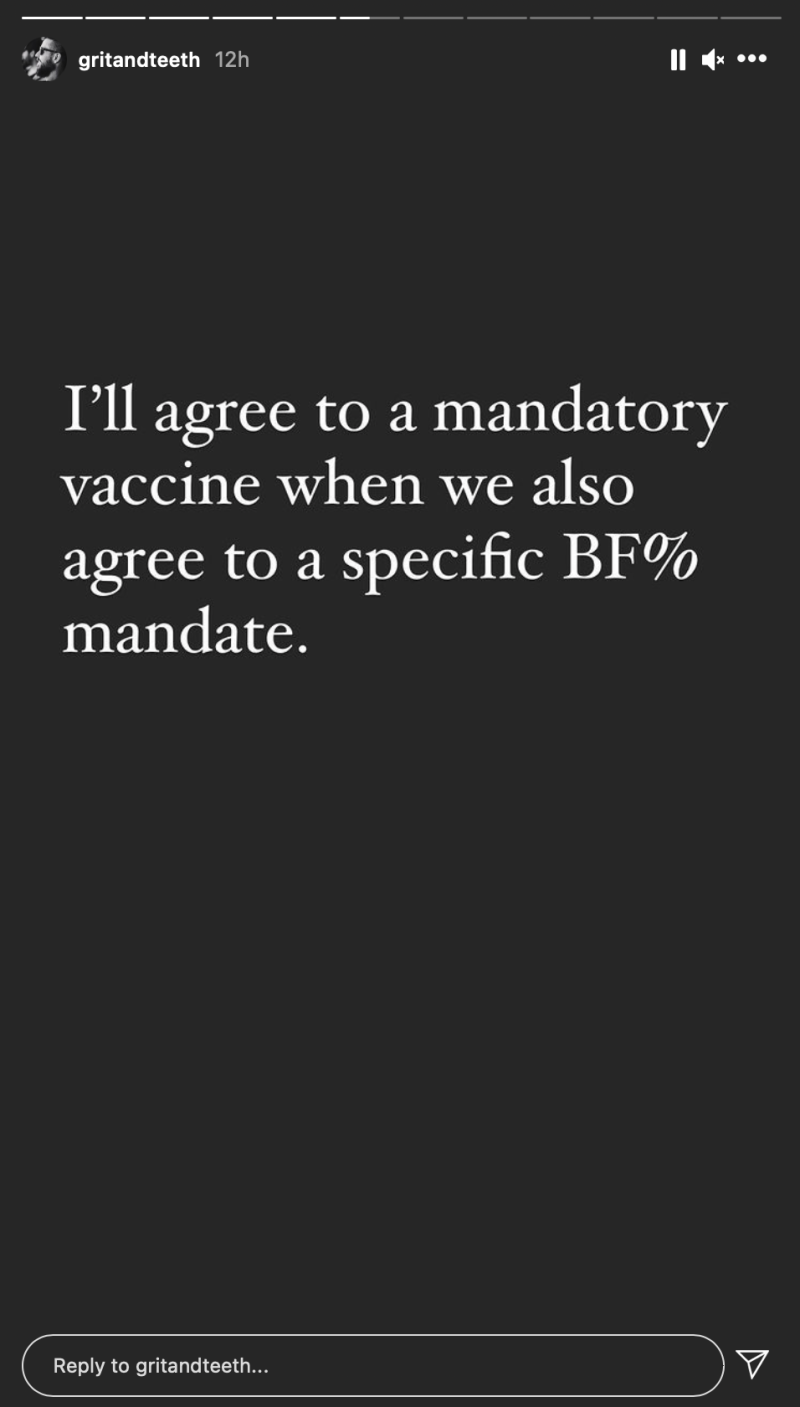 I'll agree to a mandatory vaccine when we also agree to a specific BF% mandate.

A mandatory BMI. Charming. It's a false argument anyway. As far as I know, the vaccine is not mandatory. I would guess, er, patriots like Blevins are reacting to rumblings of a vaccine passport, since sane human beings would like to be able to travel with much less fear that they're sitting next to an anti-vaxxer who thinks his killer pecs hold the key to staving off illness and death. (Don't we all know young, physically fit people who were seriously sickened or died of COVID-19 at this point?) 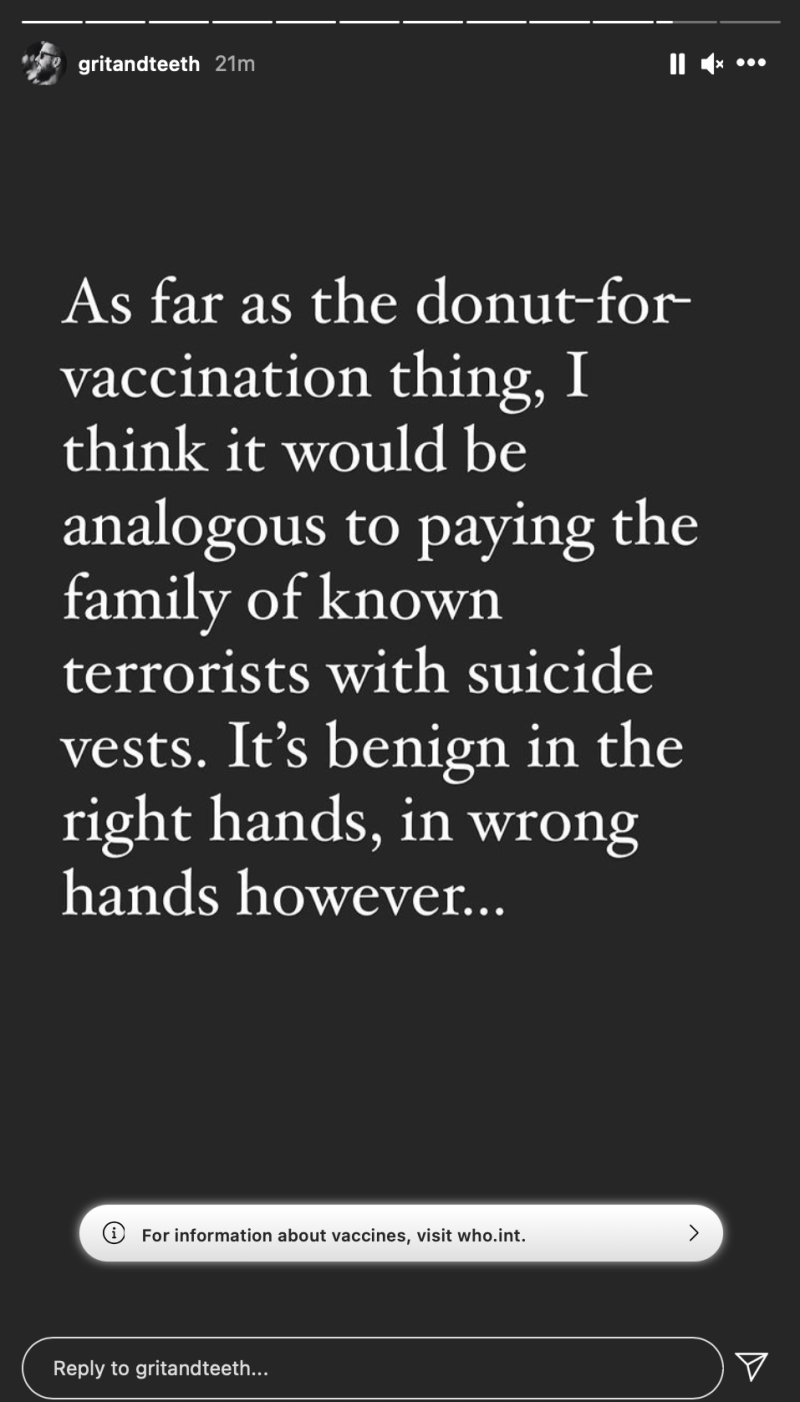 Do we need a Department of Cupboard Security? (Image via Instagram)

Another insight into how Blevins views fat people is his little joke about the fact that Krispy Kreme has offered a free glazed donut to everyone flashing a vaccination card. Granted, it's not ideal, health-wise, to reward healthy choices with unhealthy ones, but one free donut isn't going to kill you, while avoiding a vaccine against COVID-19 might. His take on the freebie:

I think it would be analogous to paying the family of known terrorists with suicide vests.

How much more clear can he make it? Okay, probably he could make it more clear — it's a warped analogy. I guess the suicide vest is the vaccine, the explosion is COVID-19, the terrorists are fat people (who we know are terrorists because of their desire to get a donut, which is back to being a donut) and the innocent victims are the physically fit.

You're not fat, you're a health terrorist! Your BMI is making it harder for all the fit people to live their lives. Treading on them is even worse when you're so damn fat.

And yet, he runs a site called Nonprophet Media, which feels to me a lot like a junior cult. More charitably, it's a site filled with ruminations about freedom that would not be out of place being chanted while storming the Capitol, and is def a site Naomi Wolf would view as favorably as you would view a Krispy Kreme freebie. It of course includes a mini-essay against wokeness. It's all about freedom, and freedom is all about truth — hmmm ... for someone who quasi-humbly claims to be lost, he is definitely seeking followers. 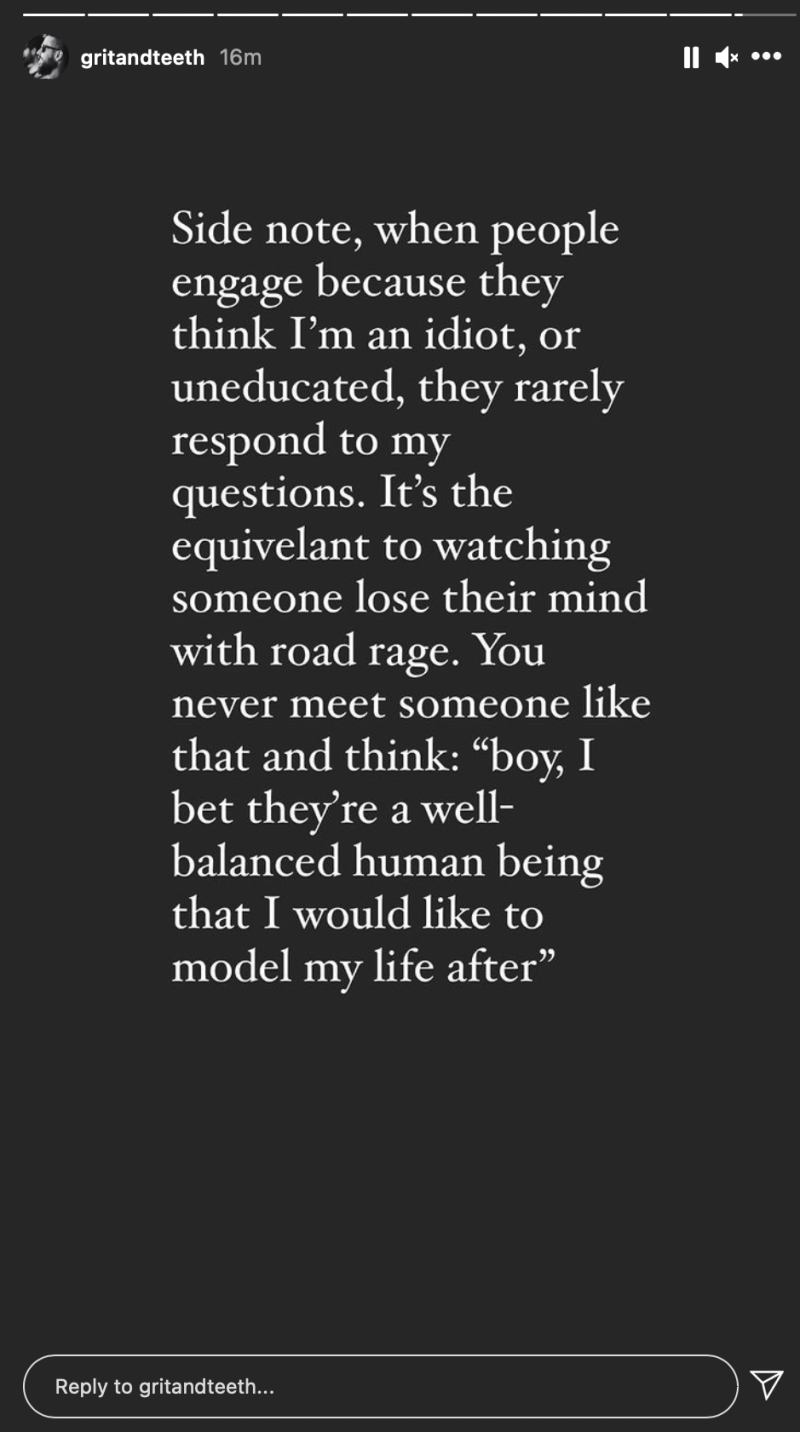 The floor model is sometimes too damaged to sell. (Image via Instagram) 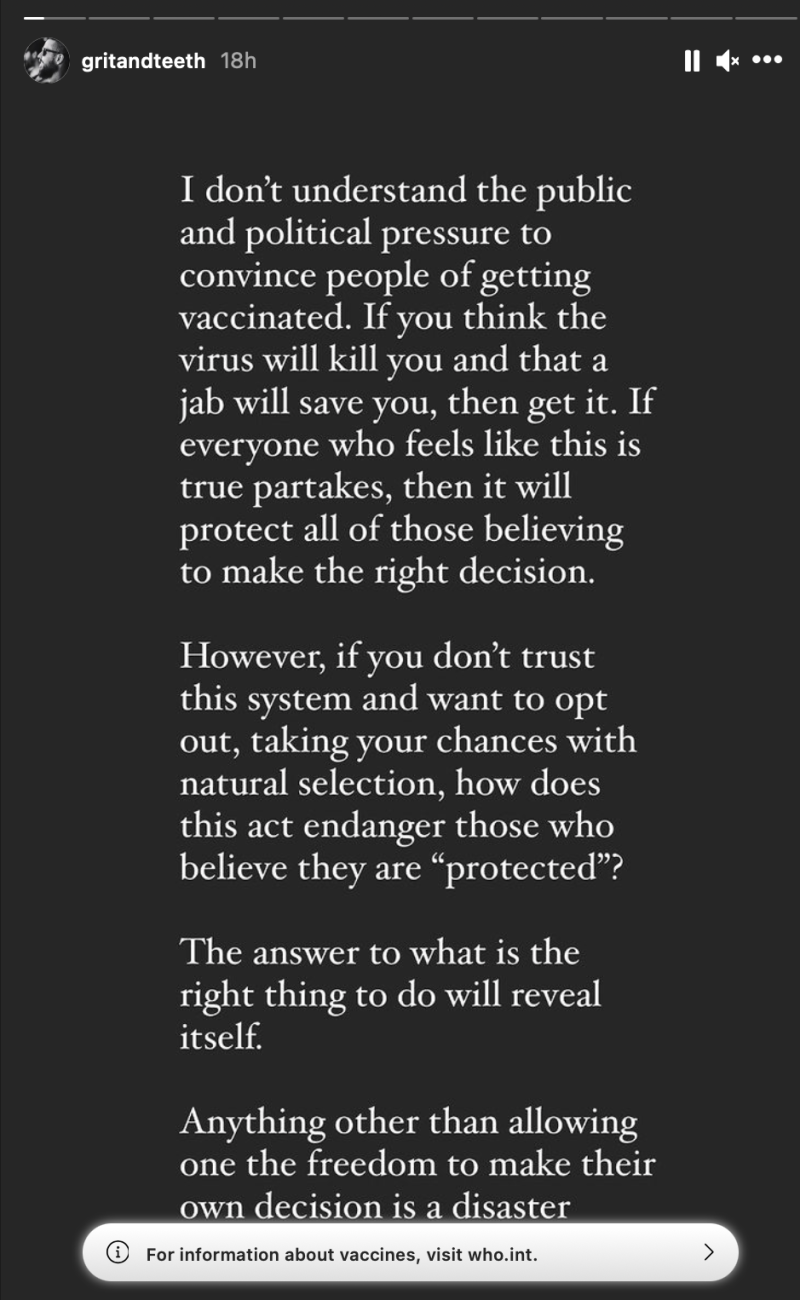 “The right thing to do will reveal itself” is something you'll need unbrainwashed at a later date. (Image via Instagram)

He also — like any good conspiracy theorist — purports to possess special knowledge and, like anyone with a public following, is prone to believing he possesses special wisdom, adding to his pronouncements about vaccination general suspicion toward, well, the entire system:

If you don't trust this system and want to opt out, taking your chances with natural selection, how does this act endanger those who believe they are “protected”?

See, he doesn't trust science or the government, and clearly thinks the vaccine is fake (since people who get vaccinated are only protected in quotes). It's the typical conspiracy theorist belief — you're all suckahs. 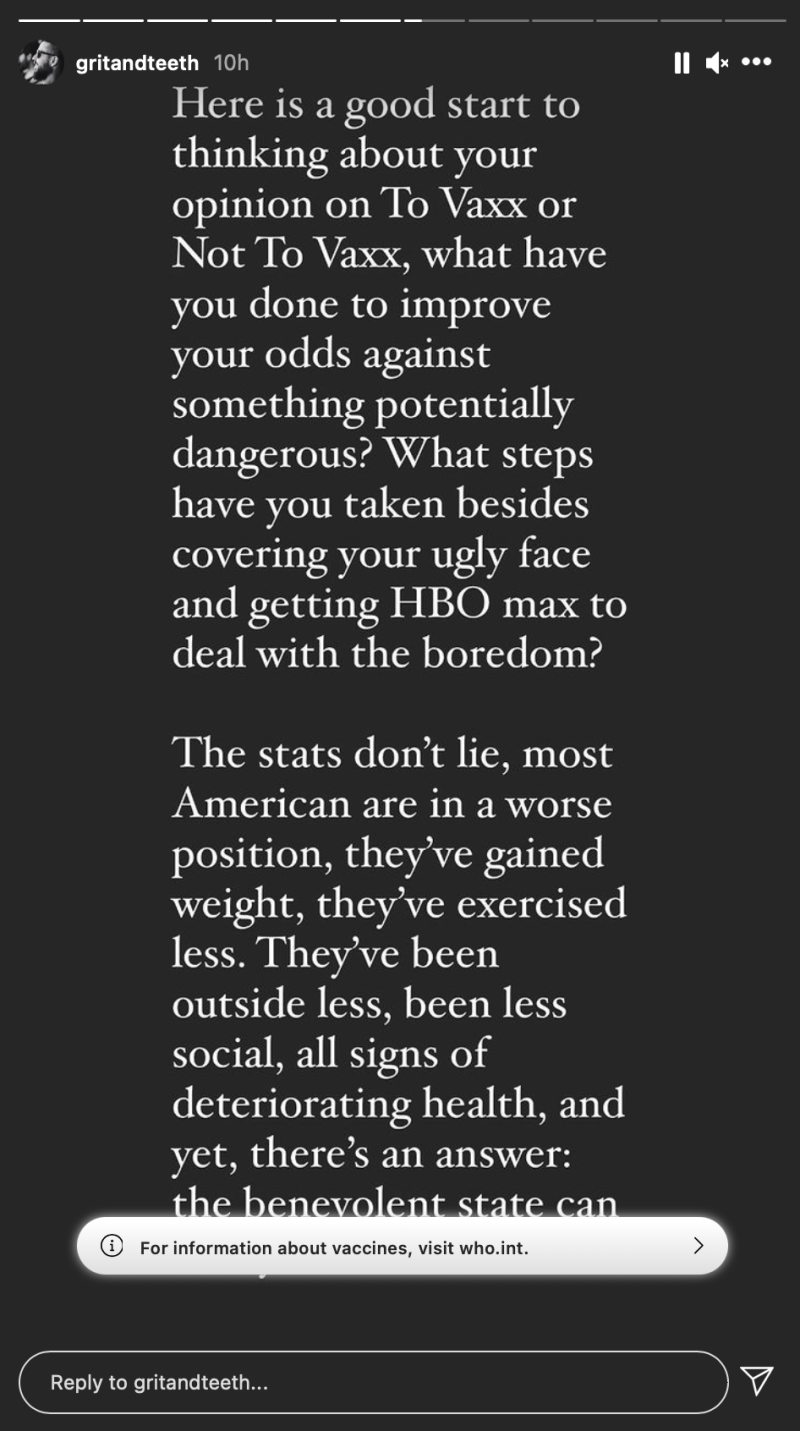 Anti-vaxxer, anti-masker, BMI bully ... in the guise of someone who wants the best for you. (Image via Instagram)

Blevins is also anti-mask, snarking that people who wear them are covering their “ugly face.” Which is a joke, but a telling one — he's playing on his readership's vanity in mocking the goal behind asking people to mask up, which is to prevent the spread of a killer virus.

There is a lot to unpack here, but one thing dredged up by Blevins's ice-cold view of lesser mortals is that there really is an unfortunate tendency, when you are supremely fit, to feel you are in some way supreme. I felt it when I was slim — I felt like I was in control of my health and would never not be. This attitude is, I think, very human. But it may be why too many fitness buffs think people struggling to lose weight are just weak. Too many secretly or not-so-secretly feel the answer to weight worries is just: Stop being so fat! This attitude comes out time and again if you follow guys with hot bodies on social media. Don't get me wrong — most are kind people, but how many times have you scrolled through your feed only to find an admirably shredded guy making an unkind, body-shaming remark? How many times have you discovered a fitness expert (ironically) supports Trump, a great signifier that a person has no empathy?

There can be a meanness in leanness, in the same way young people can sometimes be quite cutthroat in their views about the elderly. Luckily, most people have enough empathy to overcome these tendencies. Most, but not all.

If you're fat, you're largely responsible — no pun, apparently, intended. (Image via Instagram)

Finally, from a message to a critic who had attacked him for his unkind and unscientific messages, Blevins affirmed his belief that: