ABOVE: What would Wendy say?

BELOW: Keep reading for trophy boys, Sharon Osbourne's dismissal of the little people, House reps who love sedition, a hate crime victim who fought back and much more ... 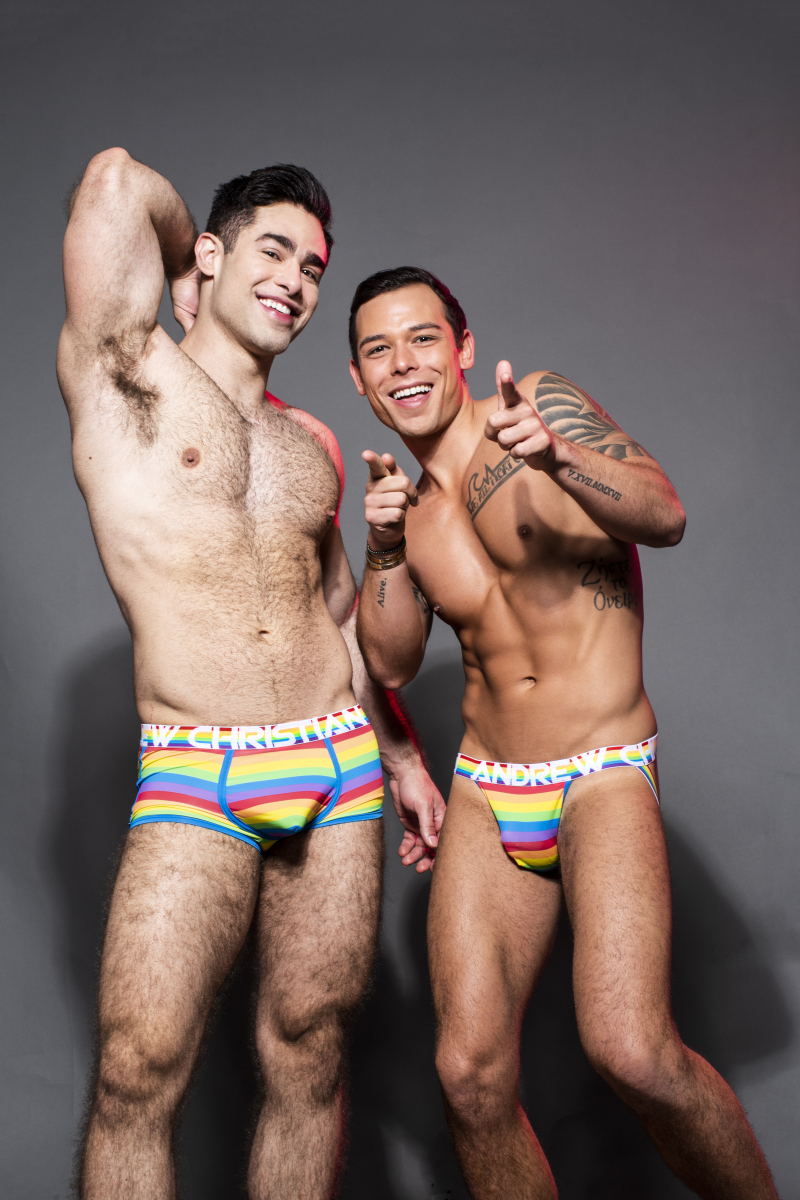 GAY FLESHBOT (WORK UNFRIENDLY): Andrew Christian has crowned a new Trophy Boy for 2021, and yes, we're all probably going to be excoriated for this by whatever generation follows Z. Lucas Leon replaces (checks notes) Nick Masc, and yes, we're going to hell for that, too. Hit the link for a book-length interview with Lucas, who is a self-defined geek.

YASHAR'S NEWSLETTER: It is alleged that Sharon Osbourne referred to co-workers Sara Gilbert as a “pussy-licker” and “fish-eater,” Julie chen as a “wonton” and “slanty eyes” and Holly Robinson Peete as “ghetto.” Osbourne, who could use a better publicist, refers to her accusers (Holly Robinson Peete and Leah Remini, among them) as “little people. Perhaps she isn't grasping that the American version is to say that a petty person is “small,” and that “little people” immediately brings to mind classist turds like Leona Helmsley.

AMAZON: David Deutsch's Once Before Sunset is here, and is described as follows:

You can always start again, and stories can always be retold to make new meanings. In Once Before Sunset, Will Belicor wanders through small-town New Hampshire, Princeton, and Amsterdam like a medieval knight errant, reworking old narrative traditions to re-assess his aristocratic New England upbringing and his increasing desire for other men. As medieval knights sought religious ecstasy through encounters with hermits, locked-up lovers, and foreign lands, Will turns to exiled intellectuals, feverish crushes, and the city of Amsterdam to establish his own moral guidelines.

SOCIALITE LIFE: Jennifer Lopez is among the influencers who helped that Missouri dad get the message out about trans kids being accepted for who they are.

CNN: The House voted to award Congressional Gold Medals to the Capitol cops and Metropolitan Police Department officers who repelled the January 6, 2021, insurrection. However, 12 House members decided that the cops were unworthy — and in voting against them, showed their allegiance to sedition. In fact, the reason they voted against was because they objected to calling what happened on January 6 “insurrection”:

TWITTER: An elderly Asian woman was attacked by a white man in San Francisco, but when people say, “You shoulda seen the other guy!” it was this guy they're talking about. She left him in such bad shape he wound up needing an ambulance. But ... look how she is ignored by medical professionals, who arrived and tended to her attacker:

Just came upon an attack on an elderly Asian woman on Market Street San Francisco. Effort I got more details pic.twitter.com/5o8r0eeHE2

BUZZFEED NEWS: In related news, Capt. Jay Baker, the Georgia sheriff's official who notoriously said the accused spa killer — who'd just gunned down eight human beings — had “had a very bad day,” turns out to have shared an explicitly anti-Asian photo on Facebook, a T-shirt saying that COVID-19 is the “IMPORTED VIRUS FROM CHY-NA.” I believe the spelling of China is to mimic, affectionately, Trump's pronunciation: 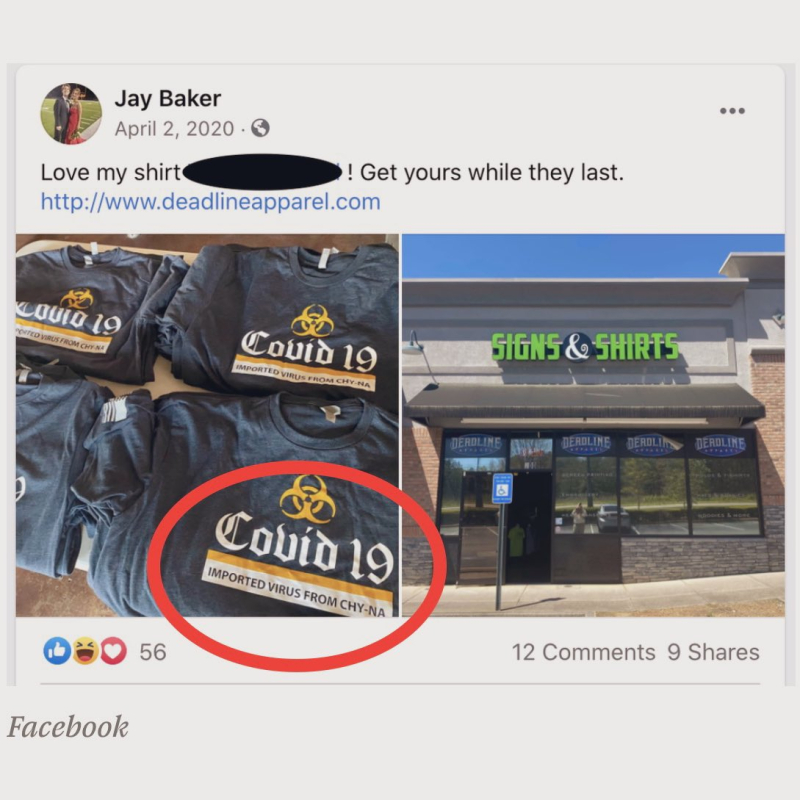 RANDY REPORT: Dozens are protesting anti-LGBTQ bills in Montana. (Hey, it's Montana — dozens is a lot!)

"There's old sayings in Texas about find all the rope in Texas and get a tall oak tree. You know, we take justice very seriously, & we ought to do that. Round up the bad guys." -- here's Rep. Chip Roy (R-TX) glorifying lynchings during hearing on violence against Asian-Americans pic.twitter.com/uy5irfmJCo

TWITTER: Rep. Chip Roy (R-Texas) — during a hearing on anti-Asian violence — brought up how Texas believes in lynching and also sniped at the Chinese Communist Party. It's unreal what people get away with these days, things that even in the bad old days would often have been career-ending.

INTERVIEW: I really liked Pretend It's a City, though I understand for some Fran Lebowitz is an acquired distaste. I missed this great Q&A with Lebowitz by Brian Alessandro for the who-knew-it-still-existed? Interview Magazine, in which she recalls becoming famous overnight: 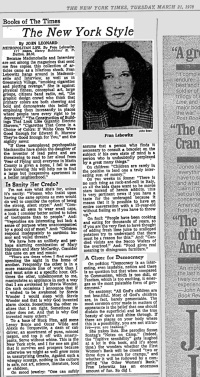 of a movie because it literally did happen in one night. It was because The New York Times, you know, it is still very powerful, but what it was then was like the word of God to the entire world. Not just New York. Not just the United States. People would have arguments about anything, and the argument would end if someone said, “Why did you think that?” and you would say, “Well, it was in The New York Times!” “Oh, that’s it! The argument is over!” I happened to get two rave reviews from the New York Times in the same week, The Sunday Review and The Daily Review and that, literally, was it. When the daily review came out, I had no idea it was coming out, I knew nothing about it, and my editor — not my editor at the time, my original editor who had been fired in the middle of my book — called me at like seven o’clock in the morning, and I had been asleep for like forty-five minutes ... [S]he said, “Did you see the review?” And I said, “Yes, I saw it,” and she said something about John Leonard, and John Leonard was the major book critic for The Times. And I said, “John Leonard?” And she said,“Yes, it’s in the paper this morning.” So, she said, “Go to the newsstand — which, by the way, there were millions at the time — buy 10 copies of The Times, and come over here,” to her apartment, and I did not have enough money to buy 10 copies of the New York Times, which at the time was like 15 cents. So, I went to the newsstand and I asked the guy, “Could you let me have 10 copies, and I’ll come back later with some money?” and he said, “No, why would I do that? Why do you want 10 copies?” And I said, “I’m in the newspaper.” He said, “No, you’re not! You’re in The New York Times?! Don’t be ridiculous!” So, you know, that’s what happened, but by the time I got to my publisher’s office I was greeted like the returning Charles Lindbergh. And it was a fluke of timing that these two things happened, and also it was a fluke that the day that it came out, there was no news. In other words, there was no big news, so a lot of people focused on that.