ABOVE: I don't understand how a FaceTime or Zoom photo shoot isn't just Cam4 — but okay!

BELOW: Keep reading for Dillon denying his passage to Tiger King, a ridiculous Georgia arrest and more ... 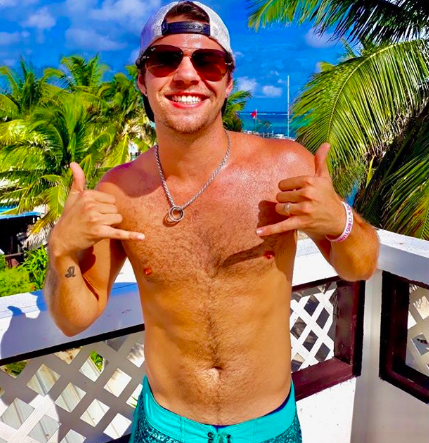 Lips that touched Tiger King's won't touch mine — but kissing isn't everything. (Image via Instagram)

YOUTUBE: Georgia Rep. Park Cannon, a Democrat, was arrested and charged with a felony for knocking on a door in her effort to witness Georgia Gov. Brian Kemp sign that dastardly anti-voting rights bill into law. Arrested for ... knocking while Black?

At least one legal expert who studied the video and read the arrest report has stated emphatically she did nothing illegal.

EXTRATV: After 5 p.m. ET on a Friday, it was announced that Sharon Osbourne — girls, hold onto your boyfriends — won't be returning to The Talk.

PBS: Dr. Deborah Birx and her unparalleled collection of privileged scarves are taking a lucrative position with an air-cleaning company. A shady air-cleaning company. Oh, and she just now is coming out and saying that everyone who died of COVID-19 after the first 100,000 was an unnecessary death that the government (aka Trump) could have avoided. Hindsight and cowardice are 20/20.

GR8ERDAYS: How are we living in a world where William Shatner is 90?! Not many years ago, The Hollywood Reporter's widely read “Creative Until You Die” feature shone a spotlight on 10 amazing entertainers who were still working at 90: Jerry Lewis, Don Rickles, Stan Lee, Cloris Leachman and Carl Reiner have since died, while Betty White, Dick Van Dyke, Norman Lear, Marcia Nasatir and Norman Lloyd are still alive. All of them — in great shape, sharp — felt 90+ to me, like yes, of course! They've been around forever! Shatner, who I realize has been working since forever, still doesn't register as a 90-year-old to me.

NBC NEWS: Julius' in the Village is a Manhattan gay landmark, but the pandemic has it on the verge of last call. A bar since the 1860s (!) and serving queer people by the 1960s, Julius' is also the site of the sip-in protest that predated Stonewall.