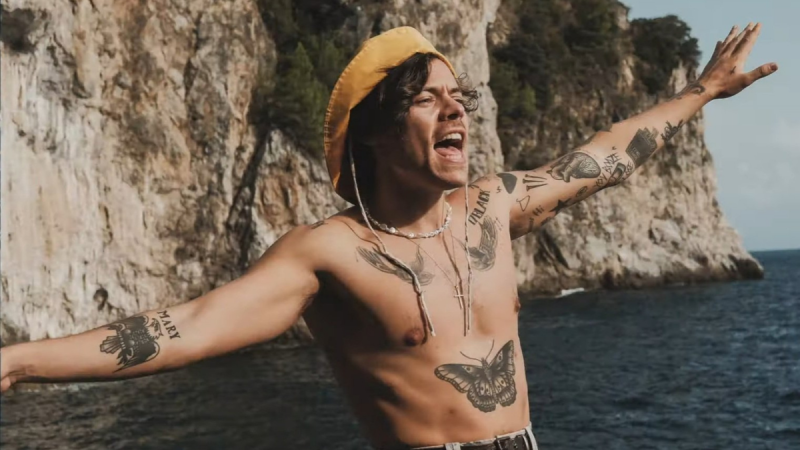 Yes, Harry will take off his clothes — and cover his period-unfriendly tats. (Image via Vimeo)

ATTITUDE: In a sign that the mini-push for gay people to play gay roles is not gaining any momentum (meaning it is unlikely to join the standard that has emerged involving trans and racially specific roles), actors keep signing up to play gay. Latest example: Harry Styles will play gay — and go naked, and film gay sex scenes — in My Policeman, his next movie. The film is based on the 2012 novel by Bethan Roberts about a '50s queer love triangle, and will co-star Emma Corrin and David Dawson.

2nd time in short-shorts — it's no accident. pic.twitter.com/57LzD3FqZS

That look was so fishy! (GIF via GIPHY)

THE FILM EXPERIENCE: John Waters turns 75 years old today, and The Film Experience is saluting him all week. Today, it's all about Female Trouble.

YOUTUBE: Proof that Kevin McCarthy's assertion that the GOP is not a nativist party is a bald-faced lie.

WAPO: Today is the day Biden's USPS nominees face confirmation hearings. If all three are confirmed (end of this month), the Democrats would have a 5-4 majority on the USPS board. However, it remains to be seen if that change is enough change to oust Trump lacky and anti-USPS Postmaster Louis DeJoy. The reason Biden hasn't trashed the entire board is that a couple of the people on it are key to the USPS union's goals. I'll tell you what — installing these three new members better lead to DeJoy being shit-canned or it's going to look very weak that a sitting president can't summarily fire a frickin' USPS Postmaster General.

TWITTER: It's shocking almost anytime Alan Dershowitz speaks in public lately, but he's topping himself by mounting a passionate defense of poor Derek Chauvin over the fact that his bail has been canceled.

“Where does he go to get the two years back?” 🤦‍♂️ pic.twitter.com/X3Ksk2kZDy

INDIEWIRE: I took the plunge and subscribed to HBO Max for It's a Sin (worth it), but have stayed for numerous other offerings, including bingeing The Sopranos for the first time (I know!). Here, IndieWire offers its picks of the best LGBTQ series on the service. I have yet to see: 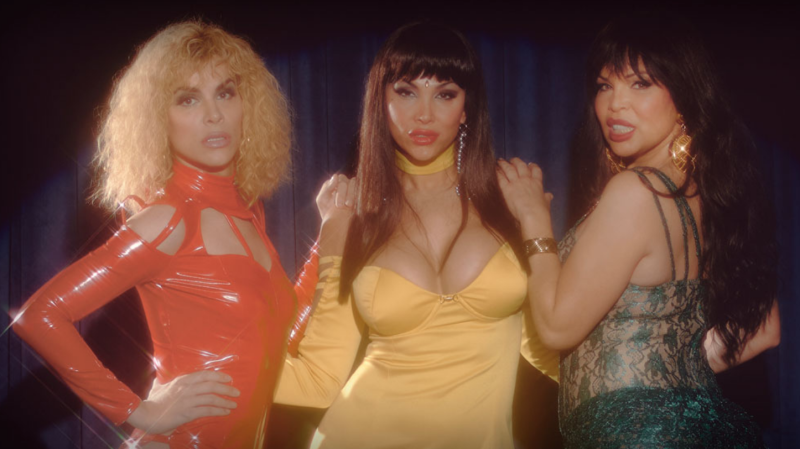 Trans singer Veneno is the center of attention on the service's biggest sleeper hit. (Image via HBO Max)

EXTRATV: How many of you knew that Andra Day's first name is  pronounced like the word “and” or like Barbra Streisand — not AHNDRA Day? This reminds me of the fact that Rihanna's name is actually ree-ANNA, not ree-AHHHNA.

ROLLING STONE: If a health care provider refused to treat me, we'd have a big problem, legally or extra-legally. This is a line a civilized society does not cross, and the very uncivilized Arkansas is glibly crossing it. INSTAGRAM: Justine Bateman, 55, is publishing a new book called Face: One Square Foot of Skin, all about how women, in particular, shouldn't try to change their faces to meet with society's approval. It's a hot-button issue. It's hard to imagine people not caring, noticing or commenting on how other people look, even if it sounds great to say we shouldn't be so judgmental, or make people feel they must undergo unaffordable and, some would say, completely unnecessary procedures trying to look young.

INSTAGRAM: Singer Ezra Furman comes out as both a trans woman and a mom of several years.