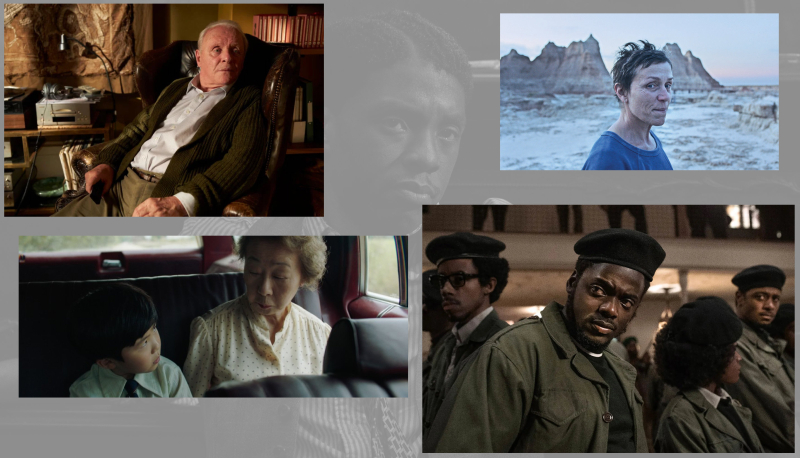 The Oscars sucked as a show.

It is hard for me to understand how a group of industry professionals conceived the show in the way they did — intimacy being a given, but having presenters babble on about nominees with fewer clips, no classic montages, allowing speeches to go on forever, a criminally disrespectful grave-digger's square dance of an In Memoriam, risking it all by giving out Best Picture third to last — and thought, “This is going to knock 'em dead.”

I don't understand why they don't just pick presenters who are fucking glamorous, established stars for people to ogle (Harrison Ford and Rita Moreno, yes), provide exciting clips, keep speeches short without cutting people off mid-sob and throw us some live music. And I'll bet anything we have a host again next year. Tiffany Haddish, anyone?

My Picks for Best Movies of 2020 HERE

That said, I am sad that so many people think it's cool to poop on this year's slate of films, claiming they're somehow less entertaining than in previous years. True enough, there is no Black Panther or Titanic, but the films were, in my opinion, almost universally excellent, and some — like Nomadland — pushed the medium forward in ways more exciting than superheroes and sinking ships.

I didn't feel the show had any energy — at all — until after 10 p.m. ET, when it was livened up by eight-time loser Glenn Close. Her shtick about spitting out all the facts on “Da Butt,” and then performing “Da Butt,” was a rare instantly iconic moment akin to Jack Palance's one-armed push-ups at age 73. It was also charming coming from the Susan Lucci of the cinema. She is a radiantly gracious woman and deserves a statuette for Best Sport until Sunset Boulevard comes out in 2022.

Sidebar: Glenn Close has tied Peter O'Toole as the actor with the most nominations and zero wins. Good company! In O'Toole's case, after seven losses, he was handed a well-deserved honorary Oscar in 2003, at age 70, and went on to secure one final nomination. Close, with eight already, is 74. It's crazy to think of, but Glenn Close is the same age Katharine Hepburn was when Hepburn won her fourth Best Actress Oscar, for On Golden Pond, in 1982. But Hepburn was a lousy twerker.

Of course, this Oscars will always be remembered for giving out Best Picture before Best Actress and Best Actor. I liked this idea, especially in a year with a toss-up race for Best Actress (I thought Viola Davis, Frances McDormand, Andra Day and Carey Mulligan were all legit possible winners of the five nominated) and a very likely feel-good win for the late Chadwick Boseman saved for last.

But as with all high-stakes gambling, you do sometimes lose, and when you do, you lose big. Anthony Hopkins took Best Actor in an upset, albeit for a performance absolutely no one is besmirching. Still, it made the evening end abruptly — 83-year-old Hopkins, in Wales where it was 4 a.m., was not on hand to react immediately — and coming on the heels of the Best Actress toss-up landing on fellow established white actor with Oscar gold already under her belt Frances McDormand, could not help but leave the viewer with a feeling that something had gone ... wrong.

One thing I find so interesting and maddening, and the reason I'm writing this post, is that when Boseman lost, there was of course understandable grousing from his supporters. He gave one of the best performances of this or any year, so as with Hopkins, there was no argument about that. But on top of merit, he died, making this his only chance for a legacy Oscar. And it is unavoidable to notice that the Oscars had been filled with talk of diversity all evening, then ended on two white icons and a hasty finish.

It is not wrong for someone to say the optics hurt, or that Boseman was robbed, etc.

The interesting and maddening part for me is how quickly white people leap in with, “Isn't it supposed to be about who was the best?!”

First, that is what Boseman's supporters wanted, too — an unmuddied declaration that their pick was the best. They may feel his race counted against him — and there is no valid reason to discount that, any more than there is a valid reason to claim it didn't play a role. Why? Because while merit has always played a big part in who wins Oscars, only a fool would argue that merit is the only factor, and only someone with blinders on would argue that race hasn't been one prominent factor in Oscar history — even recent history.

For example, only 20 Black actors have won an Oscar, including only two before the 1980s. Close to 1,800 Actor/Actress/Supporting Actor & Actress slots, and of those, 20 Black actors prevailed out of approximately 358 winners. Someone arguing that the Oscars should be about merit will have to explain to me when, exactly, race stopped being one of many non-merit factors that play a role in who wins.

And when they tell me that, they will have to explain how this is NOT like saying racism ended in the U.S. when we elected a Black president.

But leaving race aside, it baffles me that Oscar watchers would recoil so fiercely when it is suggested that the Oscars are about anything but merit. We know they are! Oscar voters are not jurors (who also suck at being impartial, by the way), they're highly opinionated people who obviously take their personal views on merit into account, but are also influenced by a film's subject matter (Did Hopkins acting out the tragedy of dementia strike a chord with the Academy's disproportionately older members?), by their friendships and work relationships with nominees, by how effectively persuasive Oscar campaigns were, by which films they saw most recently, by Oscar handicapping (I'll go to my grave arguing that giving the Oscars out so late encourages voters to rebel against front-runners, which is annoying to me), by the sympathy vote (though interestingly, out of eight actors ever nominated posthumously, only two sealed the deal on Oscar night — Peter Finch and Heath Ledger), by a desire to right past wrongs (Halle Berry's award felt like merit + it being about time for a Black lead actress, and ... wasn't it? She is the only Black woman to ever win Best Actress?!), by a desire to give a career award (the aforementioned Palance, Art Carney, countless others), by a desire not to over-award one person (McDormand has clearly bucked that trend, but Streep clearly had to fight against it) and also, within each year, by a desire to spread awards across several films.

And finally, though it is unpleasant to acknowledge, yes, Oscar voters, when they vote, are bringing all their -isms with them — conscious and unconscious.

I am pissed off that I had decided not to see The Father — only because I'm waiting for it to appear on a service for which I already pay rather than forking out $20 — so I can't state definitively who I'd have voted for. But I know that Chadwick Boseman and Riz Ahmed gave all-time great performances, and if Hopkins did, too, then can we just drop the pretense that the ultimate winner wins only due to merit? By definition, even if all five deserve it, there is no way to quantify greatness, and we all have our biases, harmless and not — and somebody has to win.