ABOVE: This and other Insta snaps of the week.

BELOW: Keep reading for a hot movie, two hot messes, an RIP for Olympia Dukakis and more ...

Mr. Man always has stuff I would never see otherwise. (GIF via GIPHY)

SLATE: Newsmax has apologized over false claims that Dominion rigged the election.

HUFF POST: The investigation into Rep. Matt Gaetz (R-Florida) is entering deep-shit territory — going from just (sarcasm alert) sex trafficking to also corruption. There is exactly a 0% chance that Gaetz and probably several people close to him won't be in prison inside of a year.

YAHOO! NEWS: A gay Latvian paramedic has died after being burned alive in what is being described as a homophobic attack.

INDIEWIRE: Some are painting it some kind of speaking-truth-to-power moment, but when Janet Mock went on a tirade at the Season 3, series-finale premiere of her show Pose in NYC Thursday night, I think she ended her career. Not because she complained about her pay of $40,000 per episode (low compared to other EPs, though I don't think Pose is a big moneymaker) or spoke out about treatment of trans creatives, but because of the venue — why not save that for an interview with Variety? why subject your own cast and crew to this nasty outburst, which included trashing her own writing staff? — and because she grotesquely made her boyfriend stand up so she could confess she'd fucked a crew member! Not for nothing, Mock's boyfriend is actually her employee — series star Angel Bismarck Curiel — making their relationship every bit as problematic as any other work relationship and making her humiliation of him grounds for a sexual harassment suit.

THE SUN: Fadi Fawaz, the late George Michael's troubled ex-partner, went on a revolting rant, slamming Michael as “a low, worthless joke.” Nobody knows why. 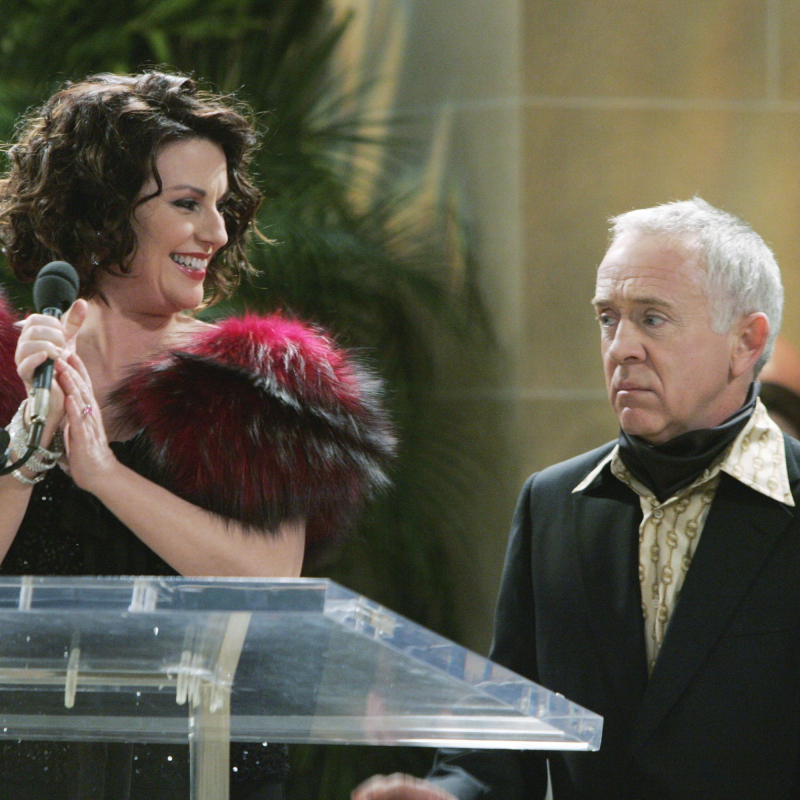 A little progress ... (Image via NBC)

RAPPLER: Leslie Jordan says he is proud of the impact he had as a gay character on Will & Grace, a comedy, but a groundbreaking show for LGBTQ visibility on TV:

[B]y the end of the run, construction workers out on the street were hollering, “I love you on that show.” We've made some progress.

SALT LAKE TRIBUNE: Sen. Mitt Romney (R-Utah) was heartily booed at a GOP convention in Utah. It's a shame he doesn't just become a conservative Democrat.

EXTRATV: Josh Duggar's sister Jessa — one of the five girls he molested when he was a teenager, but who had previously said she'd moved on from his behavior — is speaking out about his arrest on federal child-porn charges, saying:

We are saddened to hear of the charges against Josh. As Christians, we stand against any form of pornography or abuse and we desire for the truth to be exposed, whatever that may be. Our prayers are with their family as they walk through this difficult time.

TWITTER: CNN's Jim Acosta is getting raves for bluntly referring to Fox News as the “bullshit factory”:

.@Acosta for the win pic.twitter.com/V8kInvQO8w

GR8ERDAYS: The great Olympia Dukakis of Moonstruck and Steel Magnolias fame has died at 89 following many months of declining health. Cher movingly remembered her on Twitter, as did many of her peers. What an original, and her performance as the mercurial Anna Madrigal gave the entire Tales of the City franchise a star quality and depth that helped make it unforgettable.