ABOVE: Even if you've never heard of him, come ON.

BELOW: Keep reading for the gayest house ever, BIG Nas X, the first Halston trailer and so much more  ... 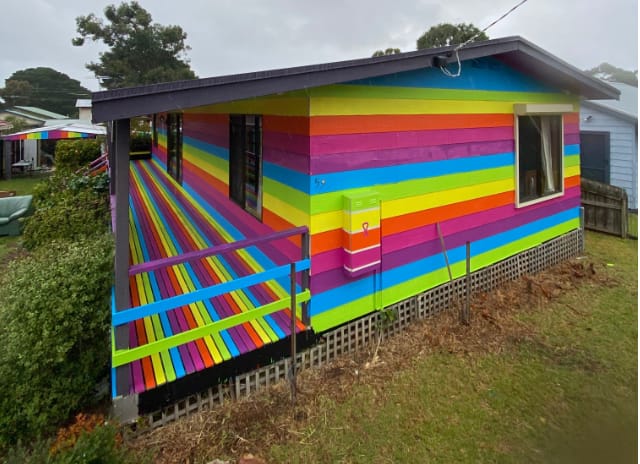 This is the house they mean when they tell you they'll drop a house on ya. (Image by Mykey O'Halloran)

WAPO: Gay man targeted for living in an admittedly hideous rainbow-hued home, but the point is — they attacked him not for his taste, but for being gay. And his neighbors came to his aid!

JOE.MY.GOD.: Right-wing gay Brandon Straka — who founded the #WalkAway anti-Democratic Party movement and was a part of the January 6 Capitol riot — describes his realiztion that he was a Trumper in disturbing, quasi-religious, almost sexual terms:

I began to feel an energy swirling around my body in a circle, and it literally knocked me off my feet. I fell against my bed and I felt a voice say to firmly to me, “Do you get it now?” My eyes filled with tears, and I actually responded to this palpable voice out loud. I said, “Yes… I get it now.”

There is plenty of gay sex in the HALSTON trailer but all I want to know about is that woman inhaling the jockstrap pic.twitter.com/33oYtbFSuL

YOUTUBE: Halston is taking us to church, based on those organ sounds — but why “Enjoy the Silence”? That song is well after Halston's heyday, and in fact was released within a month of his death in 1990. Weird:

ATTITUDE: Ten-year-old trans boy “steals” the new movie Cowboys, according to this rave review — just don't read the comments under the trailer on YouTube, one of which helpfully suggests a return to Nazism:

KENNETH IN THE (212): Animal-print Speedos are back in. Plus, more man-candy here.

Look at this old white lady disagreeing that someone else has had personal experience with racism. pic.twitter.com/auRxUWUd5i

NYT: Congrats, to the United States! Enough of you, your friends and/or your relatives are so stupid that it appears we will NEVER achieve herd immunity.

TWITTER: D'ya ever get the impression that Alan Dershowitz has no idea what he's talking about? If not, check him out here, making up the idea that lawyers should never have their homes searched:

"The only reason you should ever have a search warrant to a lawyer is if there’s great evidence that the lawyer, is in the process of destroying it..." —Dershowitz, just making up legal standards that don't exist. pic.twitter.com/WRGbkkFEr1