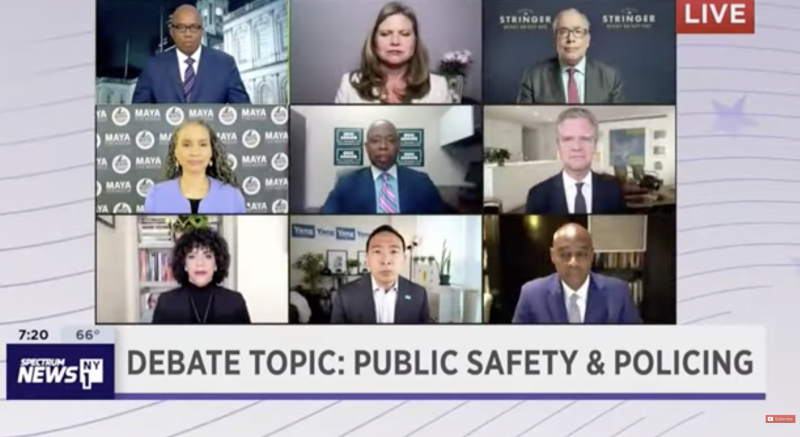 Yang & Adams are leading a month or so out. (Image via video still)

Thursday night, eight candidates duking it out to become the Democratic nominee for NYC mayor debated the issues — and each others' qualifications — ahead of the June 22 primary.

I must admit that as politically aware as I am, I only knew about half of these people were running. Yang seems poised to win the primary and the race on nothing more than name recognition, in spite of some pretty boneheaded comments along the way (100% support for Israel as it slaughters Palestinian children, taking some credit for swinging the Senate races in Georgia blue) — if you read the comments across social media, Yang has an inexplicably feverish base of fans who react to him as if he were electrifying.

Kathryn Garcia, dubbed a “problem-solver” for her work at the Department of Environmental Protection and the Sanitation Department, was endorsed for the job this week by The New York Times.

The fact that The New York Post endorsed Adams (among Dems; they'll endorse a Republican for the actual job) makes me unwilling to vote for him. A former cop, he seems reluctant to do anything about police shortcomings and once promised to carry a gun as mayor (which he last night amended to say only when necessary).

As of a couple of weeks ago, Adams seemed to have momentum, according to a poll that showed him closing the gap with Yang.

Stringer, a longtime, well-liked wonk, has seen his campaign rocked by accusations of sexual harassment and assault by political lobbyist Jean Kim, but he has forcefully denied wrongdoing. Still, in this climate and in a city with a large number of progressives who will always want to side with accusers, it seems unlikely he will prevail.

On thing that was noteworthy last night was when the candidates were asked who  — due to the city's move to ranked-choice voting — would be their #2, the only ones who would commit to a name were Yang and McGuire (choosing Garcia), Wiley (choosing Morales) and Donovan (Wiley). I think to not reply is a dodge, though Stringer acknowledging he is nowhere near #1 is at least realistic.

So far, the candidate I think I like best is Garcia.