Wilde Girls: Harry Styles Fans Fuel An Effort To Cancel Olivia Wilde ... Over Not Much At All Comments (0)

If you're mad at this, stay mad. (Image via Twitter) 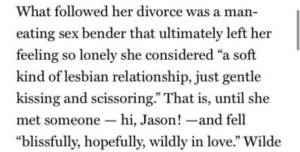 over tone deafness and other hanging offenses drive me crazy, and then I realize I'm fighting with 14-year-olds. Such is partly the case of the brouhaha over utterly harmless comments Olivia Wilde made in the recent past which have trended for over 24 hours. In one interview, she referred to turning to directing as being similar to someone coming out as gay. In another, she said a bad relationship with a man led her to consider “a gentle kissing and scissoring” relationship with a woman.

For this, thousands on social media are referring to Wilde as homophobic.

The controversy seems to be fueled by Harry Styles fangirls; Wilde is in a relationship with Styles, and is directing him in the film My Policeman, based on the 2012 novel by Bethan Roberts. Perhaps coincidentally, perhaps not, it's a gay-themed novel by a non-gay author which — these days — is a case of telling a story not your own. (Get over it.)

However, someone as non-teenage as activist Amy Siskind responded to the Wilde flap, calling her comments disgustingly homophobic and bragging that she'd never even HEARD of Wilde. (Gee, not a very feminist thing to brag about — that you don't recognize the name of one of Hollywood's most prominent female directors. She later deleted the tweet. Probably someone whispered to her that Wilde is queer and the comments are neither “disgusting” nor “homophobic.”)

These comments are not disgusting, they're not homophobic and fuck it — they're not even tone-deaf.

These baby gays have lost their goddamned minds if they think comparing something to coming out is an egregious overstep. Every single day, people refer to being outed as a fan of this or that, and it doesn't mean they're diminishing what it means to be outed, as one example.

Words to matter, and there are many cases where people say something stupid or even hateful and need to be called out. This isn't one of them, and the outrage isn't even organic.