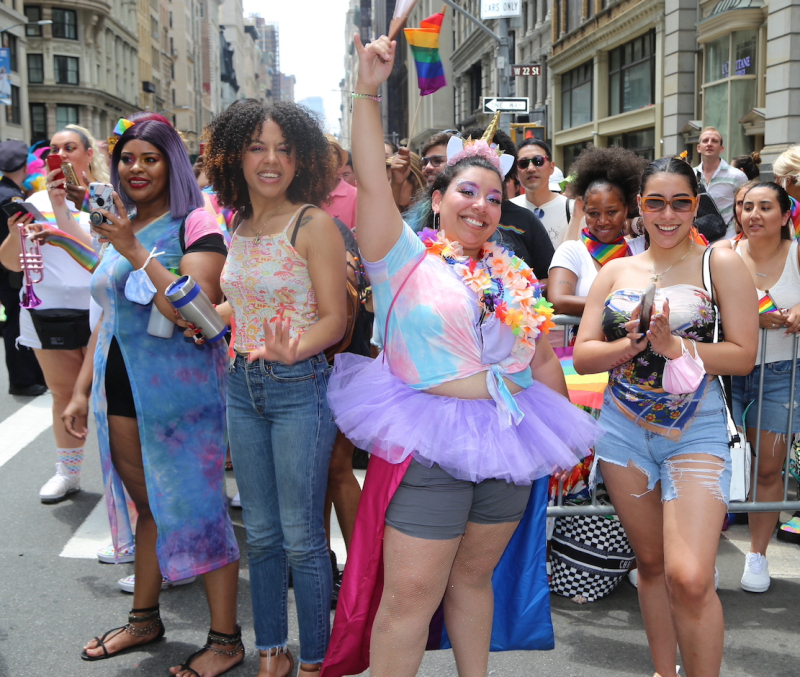 Crowds showed up for even a truncated march! (All images by Matthew Rettenmund)

Pride was physically tumultuous for me in 2019, since I'd spent like six months with no exercise while nursing my sick pooch back to health; I'll never forget the feat of endurance it was to see Madonna perform then.

Pride in 2020 was virtually nonexistent. 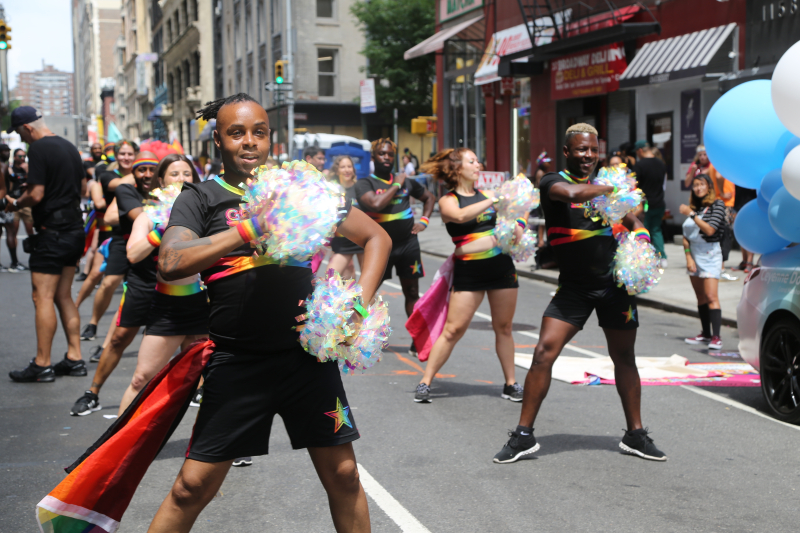 Everyone was in good cheer.

This year, because NYC had not fully reopened when plans were laid, Pride was a mish-mash of classic and cautious, crowded and sparse, big and small — and I must say I was shocked just how often it landed on classic, crowded and BIG.

It was also punishingly humid out — we are entering a days-long heat wave — making this year's theme of The Fight Continues feel more like The Struggle Is Real. 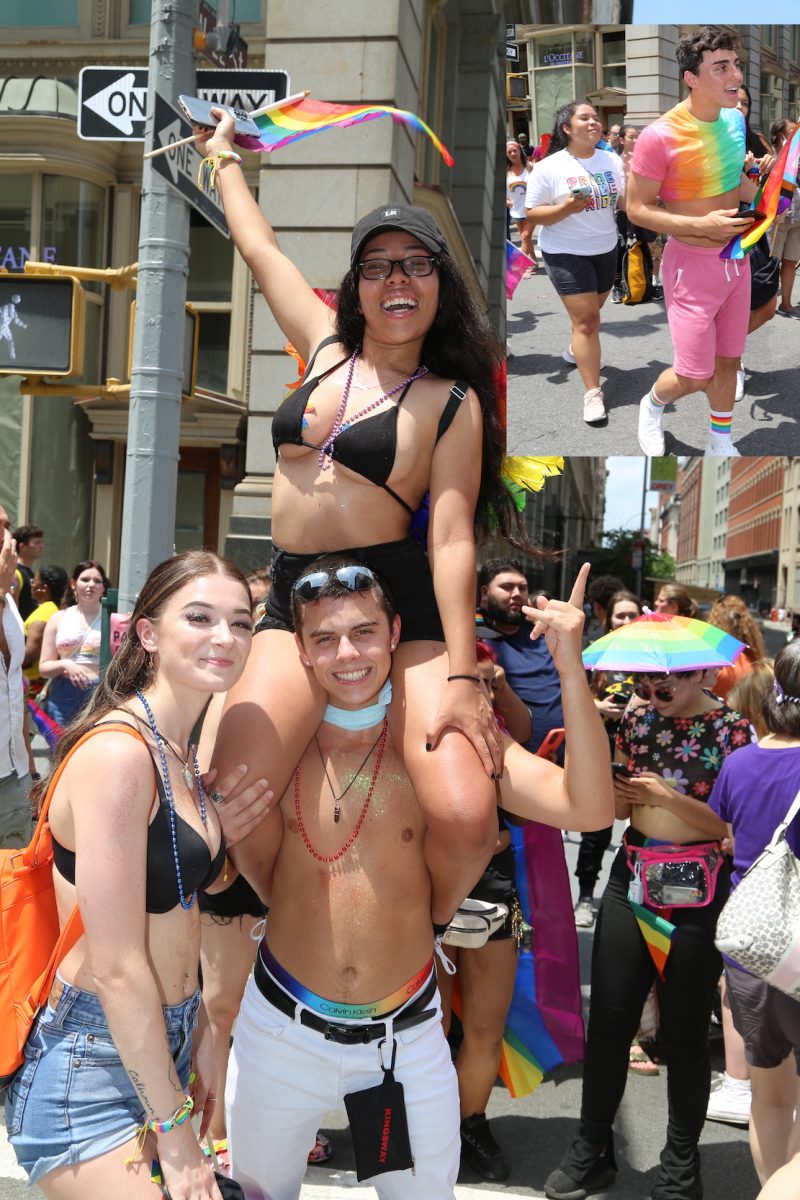 Kids were the backbone of Pride this year.

On my way to the kickoff presser, I spied a family of hicks stumbling out of Port Authority, the teen son in a camo TRUMP cap, and then noticed a series of anti-vaxxer and anti-mask graffiti messages. I tried not to let this put me in the wrong mood. Most of New York state is vaxxed and I imagine way past 70% of NYC is by now, so the real nuts are in the minority, but it was still jarring to be reminded that fascism and populism masquerading as junk science are here to stay. 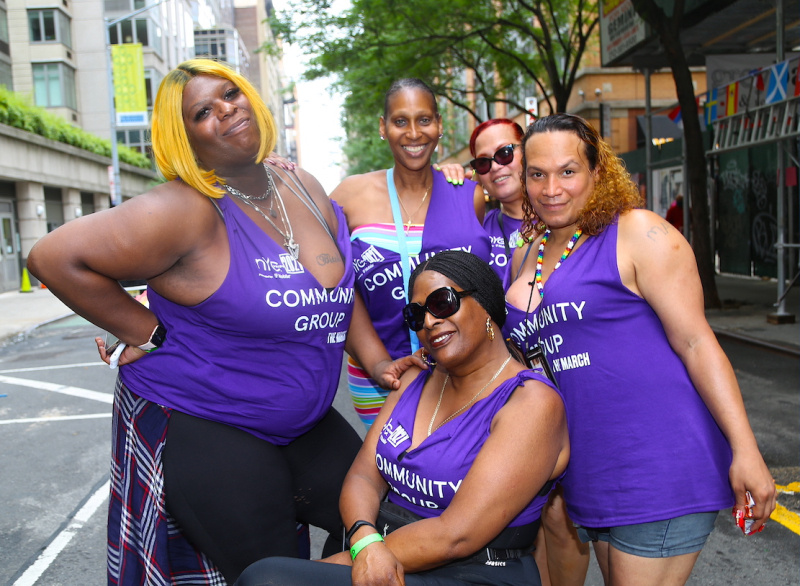 My first Pride snap (this one) was commanded — and they were right!

In fact, at the otherwise uplifting presser — which included rousing speeches by three of six grand marshals: Ceyenne Doroshow, a trans housing advocate; trailblazing model Aaron Rose Philip; and anti-HIV pioneer Dr. Demetre Daskalakis — Senate Majority Leader Chuck Schumer (D-New York) was briefly drowned out while giving interviews beforehand by a screeching, sixty-something, white (why are they always?!) gay man who belittled Schumer for doing a photo op and nothing else for NYC ... and who went on to screech his voice deserves to be heard because he is a patriot, against illegals and loves Trump.

Fab ⁦@TishJames⁩ & ⁦@SenSchumer⁩ ignoring nasty, old, white A-hole gay who feels Schumer is not helping NYC…but who screams he is a patriot who loves Trump. pic.twitter.com/V9t9pbiNef

Some of us barked back at this creature, who is too dumb to realize Trump despises him, but who probably understands that nobody will suck his dick so feels he has nothing to lose being an A-hole at a Pride event. He was urged away, shouting that he'd see us on Christopher Street — is there a bridge there now? Because this troll surely lives under one.

.@ceyenne3 speaks out ahead of NYC Pride, urging that marginalized communities get $ for education. On bathrooms: "I'm gonna use either one of those motherfuckers — I don't care!" #PrideNYC pic.twitter.com/UwBBSTkms1

Doroshow started out saying she wasn't sure what to say, but then launched into a passionate, stump-ready speech about how government has failed people without homes, particularly Black and trans people. 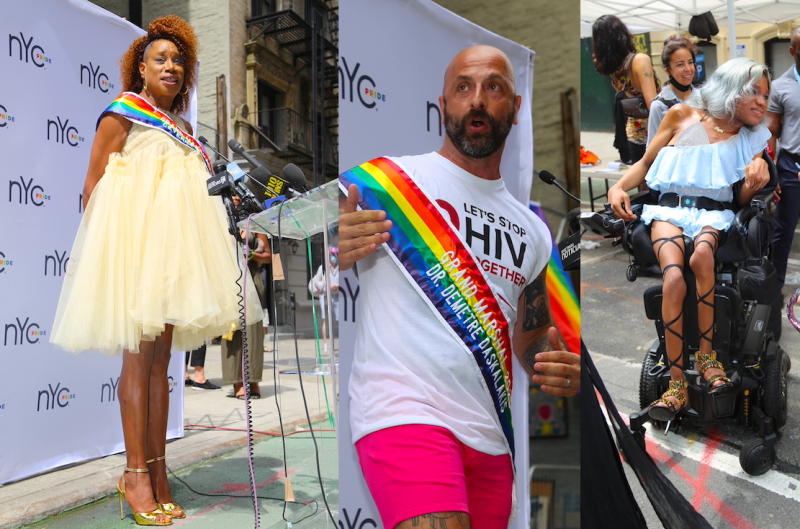 She has charisma to spare and made her case eloquently. Dr. Daskalakis, accompanied by an impossibly hot piece in Spandex, gave a cheerleading speech that talked up our ability to eventually defeat both HIV and COVID-19 entirely, and he was followed by Philip, a Black, trans model in a wheelchair who was just an impossible-to-ignore positive spirit who said she was thrilled to be at her first Pride, and to see our beauty and excitement. 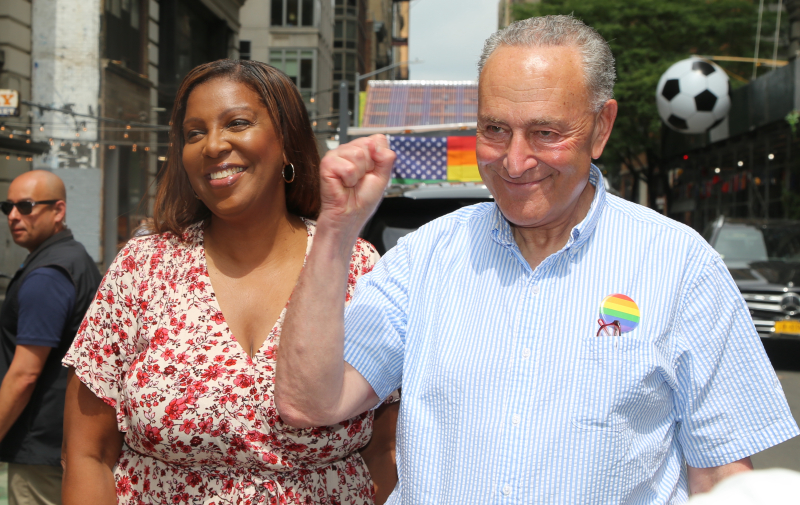 It was a great mix of speakers, though it was too bad fellow marshals Menaka Guruswamy & Arundhati Katju (who are fighting for LGBTQ 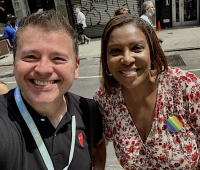 rights in India, currently ravaged by COVID-19) and beloved queer actor Wilson Cruz could not be there in the flesh.

I was particularly thrilled that after Schumer and New York AG Tish James gave a solid joint speech I was able to get a moment with Ms. James to tell her how much I support her. She was lovely. People were telling her stories and she was gamely answering any and all questions, including when a guy asked her what she'd say to his friend, who was at Pride for the first time. Nonplussed briefly, she cracked, “What's wrong?!” but when told he was from abroad she issued a warm, welcoming statement to him. Some were shouting, “Fuck Trump up!” as she spoke off to the side, and I am not kidding that Schumer murmured, “I think we are ...” 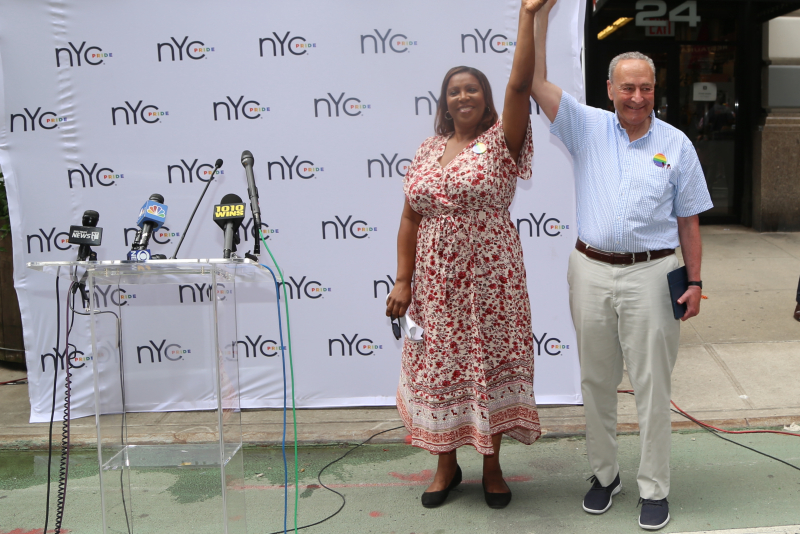 Trump's nightmare — a strong Black woman with access to his taxes!

Also of note at this kickoff, Schumer was cornered by a Britney fan who asked him if he believed in the #FreeBritney movement. He does, and he happily went on video for her to say the thinks Congress needs to investigate:

After this, I was already sweaty and exhausted. I think these past two years — shoulder issues, dog being sick, other dog dying, lack of exercise until quite recently, pandemic stress — have really taken a lot more out of me than I had realized. I was like DONE. But I pressed on. 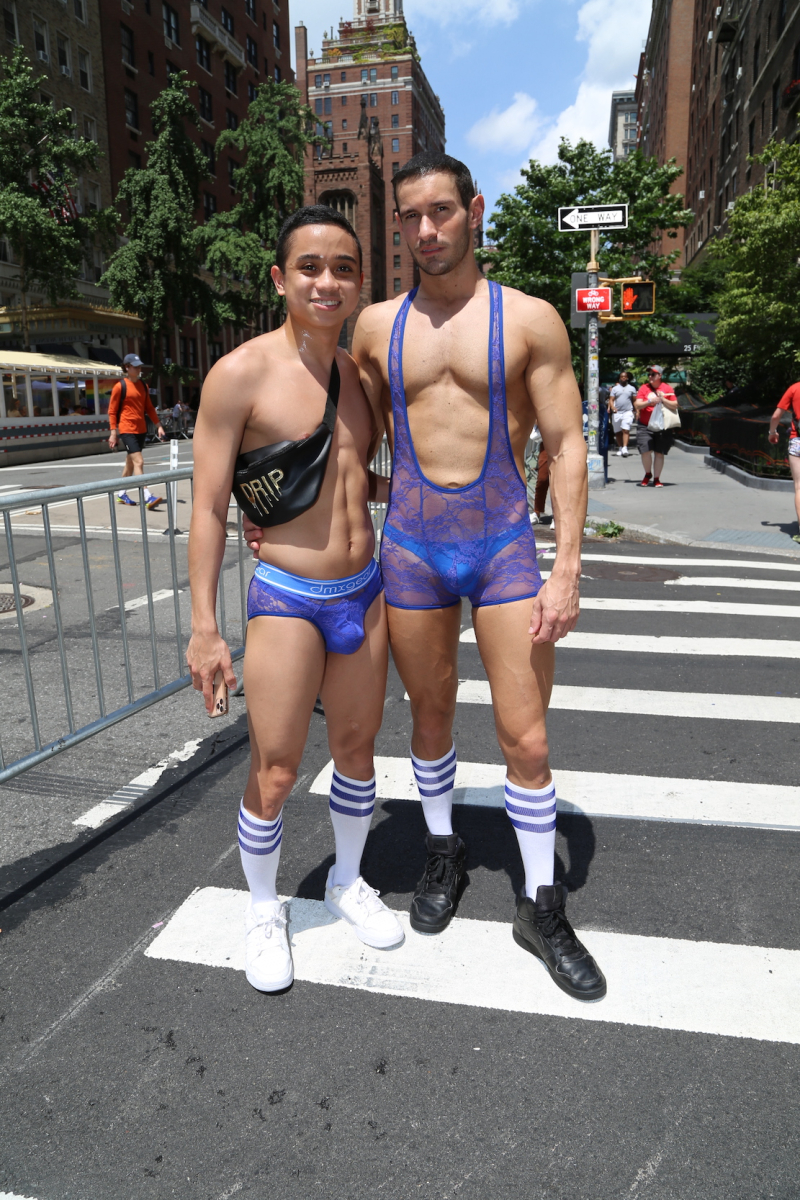 One of my only shameless beefcake shots — just was not the year for that focus!

As you probably know, no regular march was publicized this year, but there was one. ABC shot segments that included a couple of musical performances, and then four so-called pods that contained a limited number of floats and personalities, all marching down Fifth Avenue. In spite of drastically limited participation in the march itself due to previously decided COVID-19 protocols, I was floored when we moved down a bit to see the sidewalks still packed with spectators. 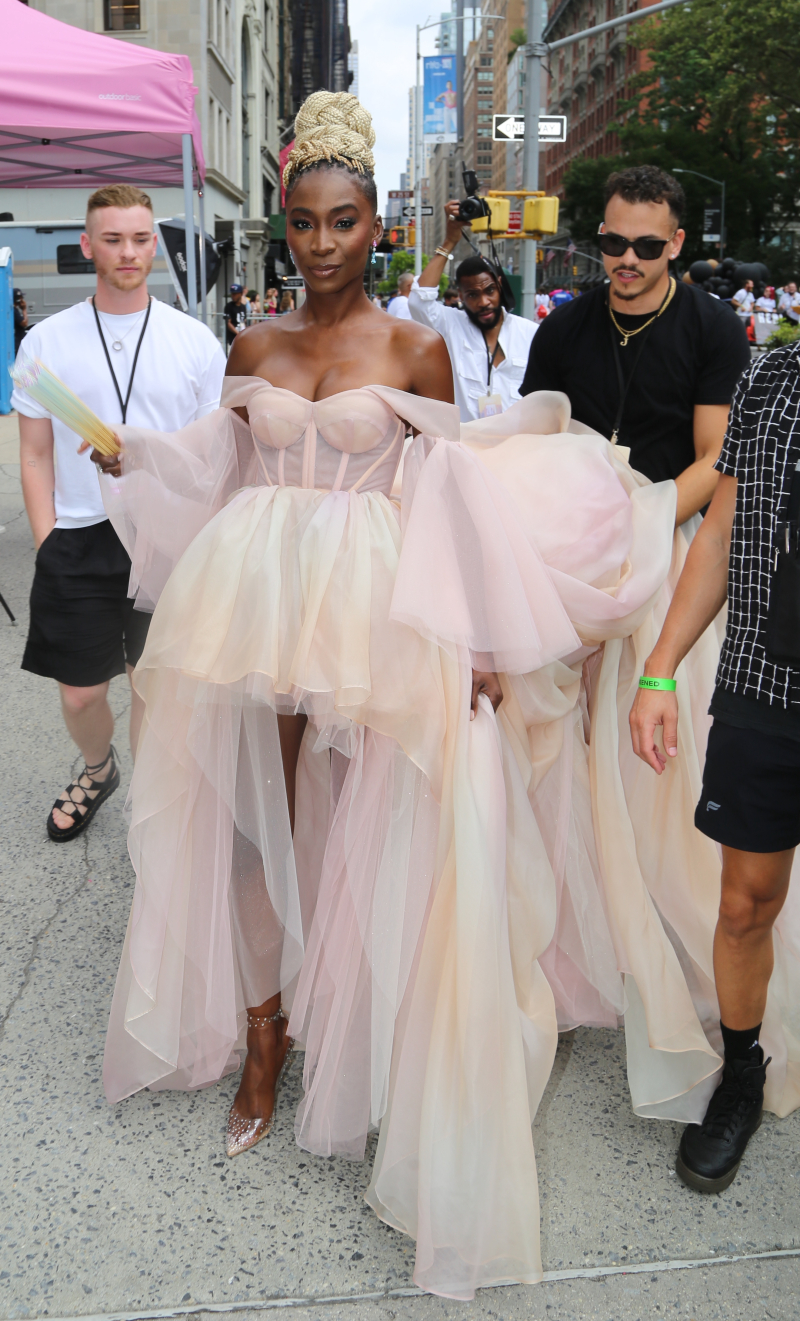 She looked like this in humid, 84-degree weather, okay?

Pose star Angelica Ross — looking majestic — was one of the commentators for ABC, and she shot me several great poses when not working. She is a delight, and has hit the ground running since fame came knocking: actress, activist, model, spokesperson, advocate. 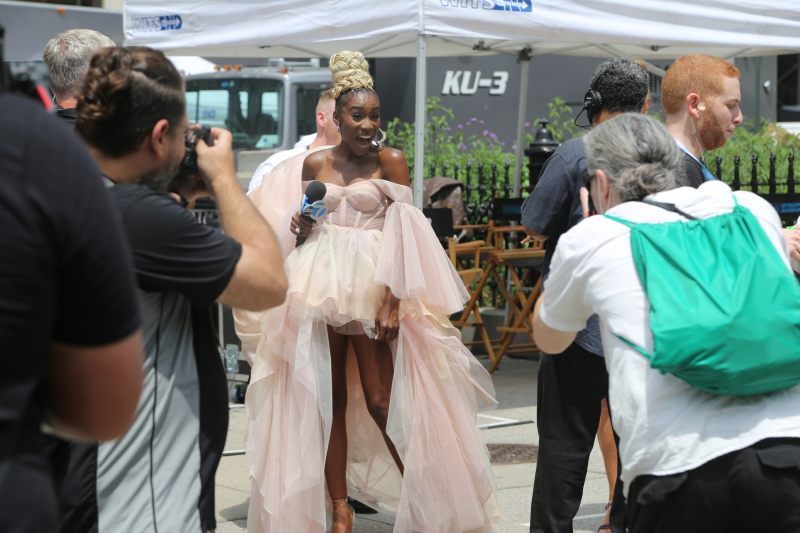 Ready for her close-up! 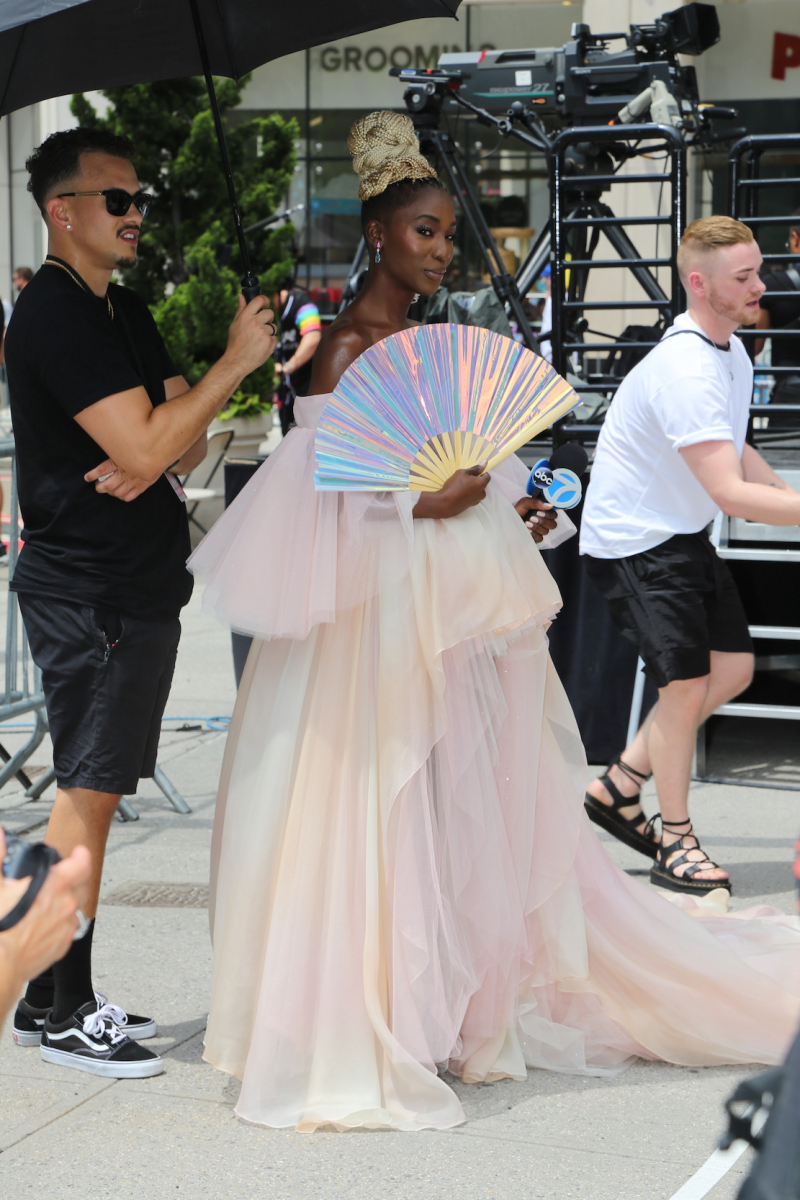 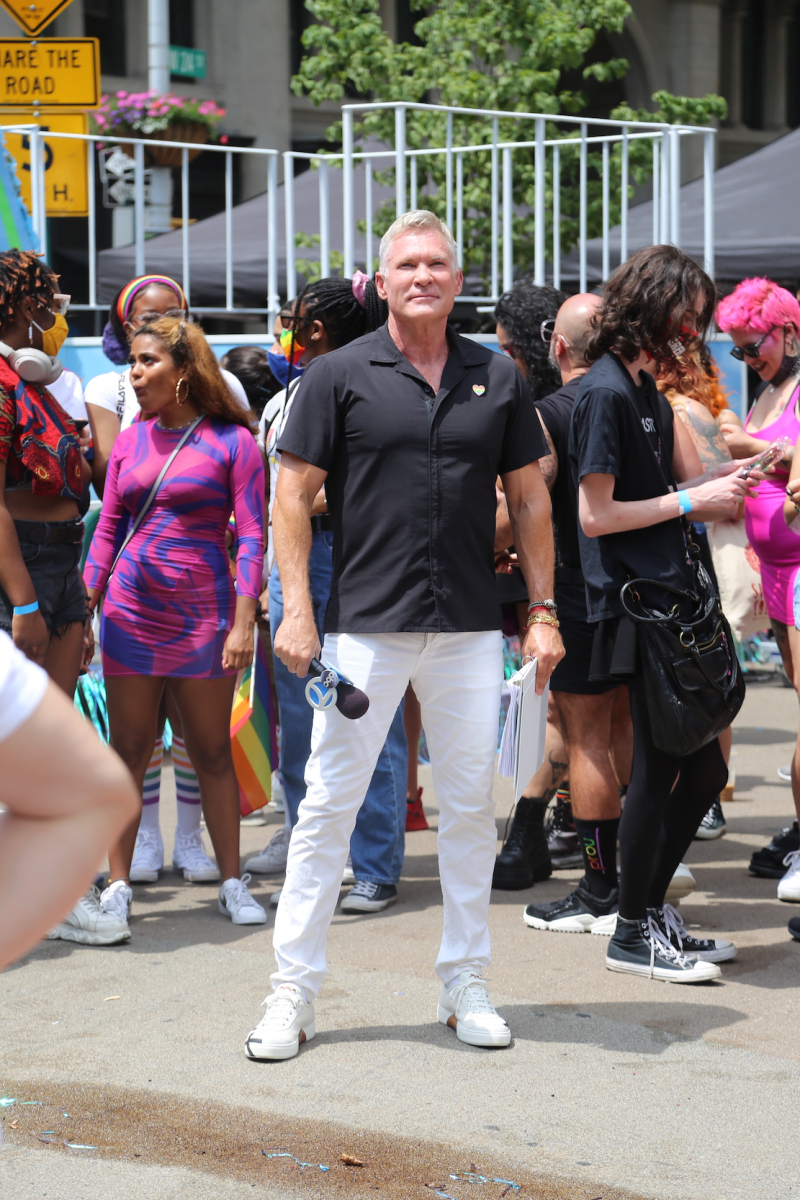 People often say Pride is about half-naked white boys. This has never been my experience, maybe because I always walk the actual march route and am never in just one place? But for me, every year, I see spectators who are overwhelmingly non-white, working-class people, and who are men, women, non-binary and every race. It's also usually a great mix of old and young, but for whatever reason, it really felt young this year — many spectators walked from the march route over to Pride Fest on Fourth Avenue (there's a Fourth Avenue?) between 9th and 13th Streets, where the booths were choked with LGBTQ youth. It was really exciting to see that young enthusiasm for the march, which has been so heavily criticized as corporate; not so its supporters, who were there with their trans flags, their painted faces and their unbridled excitement to be fully themselves in public, surrounded by queer peers. 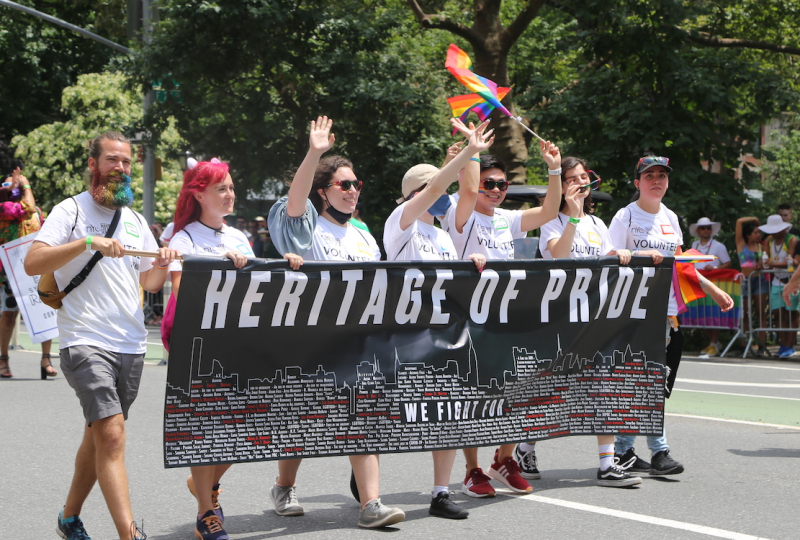 The first group to step off 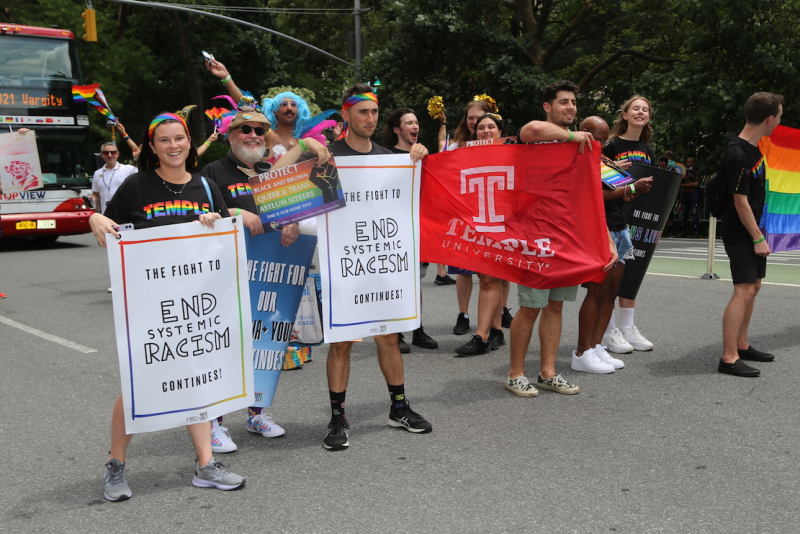 The march was very social justice-centered. 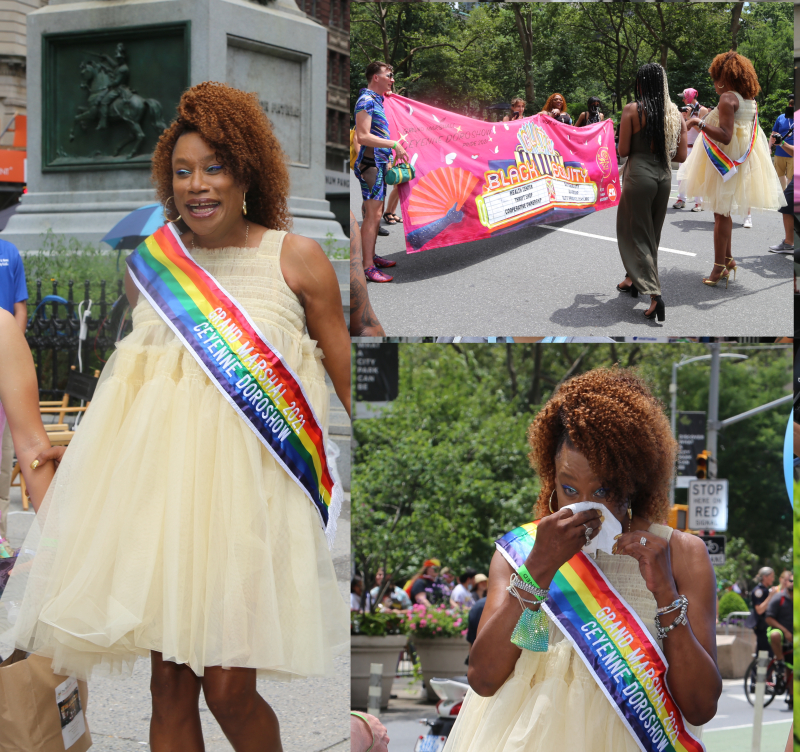 Ceyenne said, “This is a lot!” Then, after seeing her lovely banner, wiped tears from her eyes. It was so sweet. 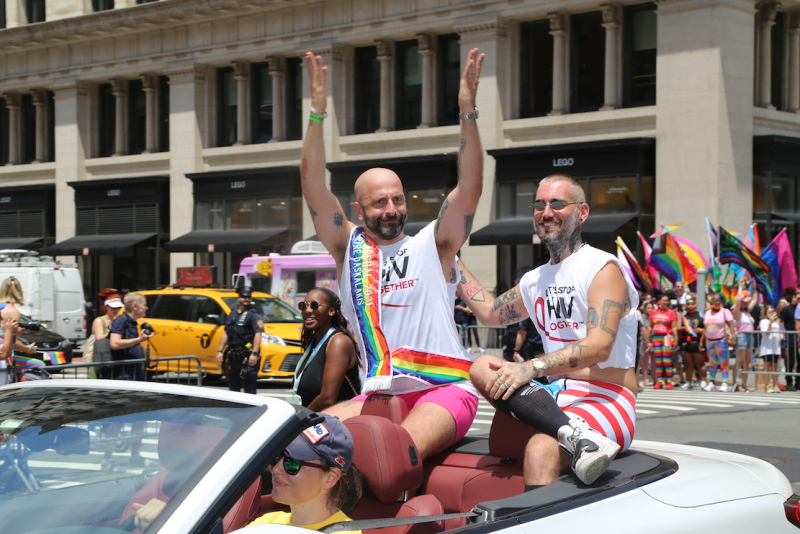 Enthusiasm — just what the doctor ordered!

As cool as it was, it was also HOT, so I had to leave after a full afternoon there, but while I hope my stamina will return next year (a losing proposition — hoping physical endurance will improve over time!), I was jazzed to be surrounded by the beginnings of a full return to normalcy after such a long, dismal period of stagnation. 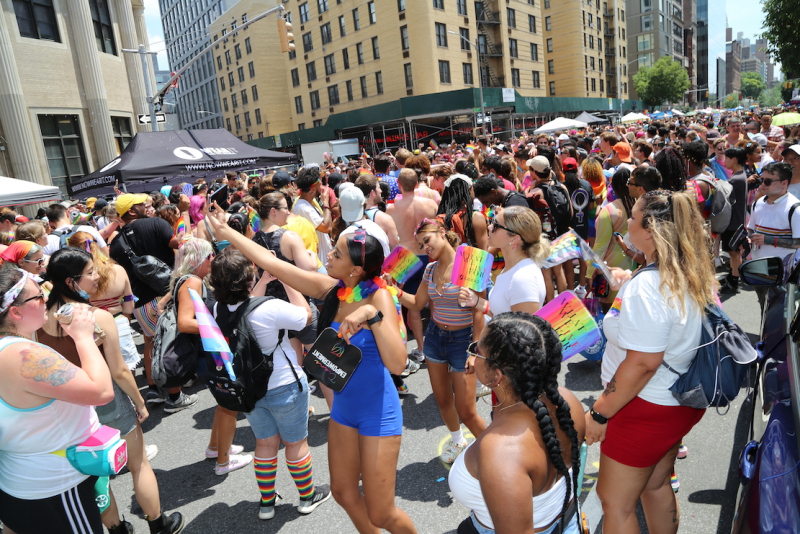 And the sight of all the young people suggested to me that when The Fight Continues, they'll be ready. 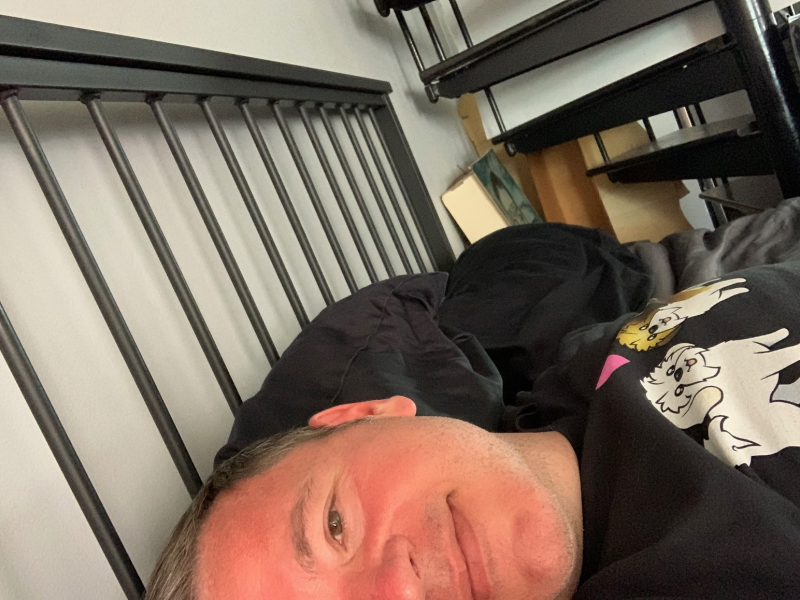 Me, sunkissed, post-Pride. Later, wearing my Sash & Hyphen tee for the first time since she died, walking Hyphen, hobbling along with my lobster face, I definitely created a story for anyone watching us.