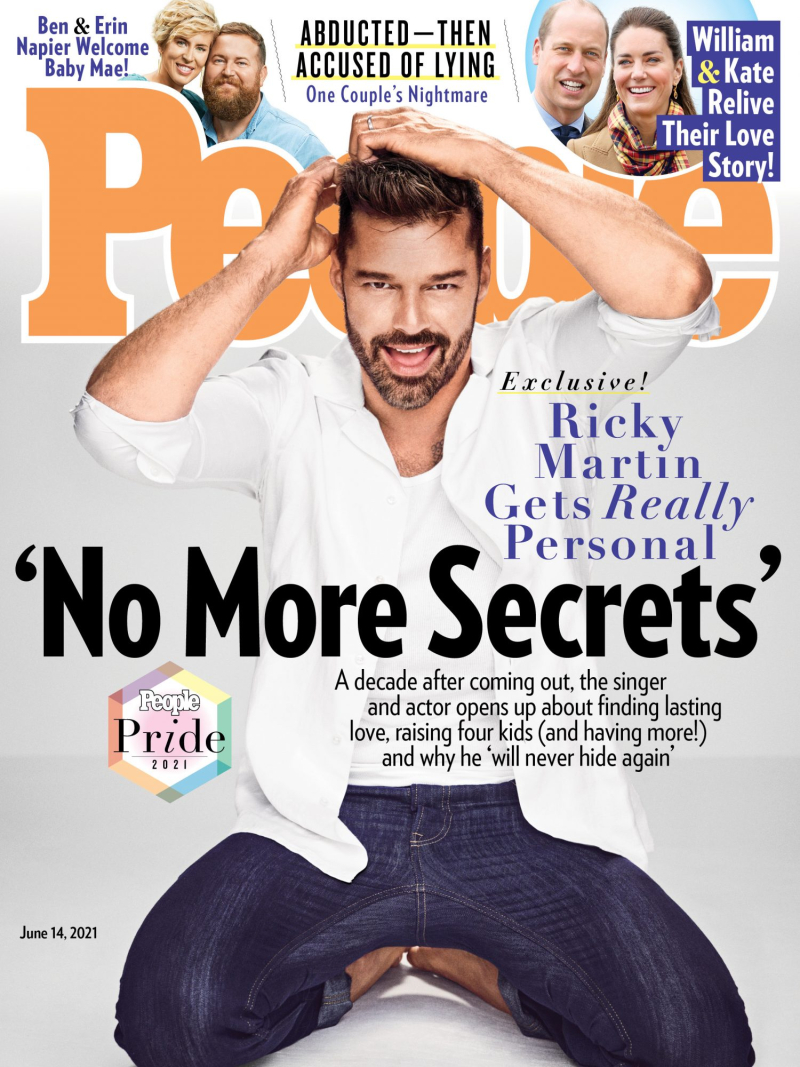 It's Pride Month, and it's also Gay Ricky's 10th anniversary. (Image via People)

PEOPLE: Ricky Martin has granted an extensive interview to People Magazine for Pride, talking about his hesitation to come out early on. He is also taking the opportunity to vilify Barbara Walters for daring to ask about swirling gay rumors in 2000, even though as a journalist, she did what she was supposed to do, wasn't an asshole about it and didn't exactly trick him into the Q&A — he was on top of the world, didn't have to speak to her, and knew she was the type of interviewer to ask tough questions. Still, he refers to that  moment as having left him with PTSD. I am wondering if the stuff that undoubtedly went on in his Menudo years wouldn't be more traumatizing. Or maybe that is why he was left so vulnerable to be that scared at 29 to be asked, albeit obliquely, to talk about his sexual orientation? 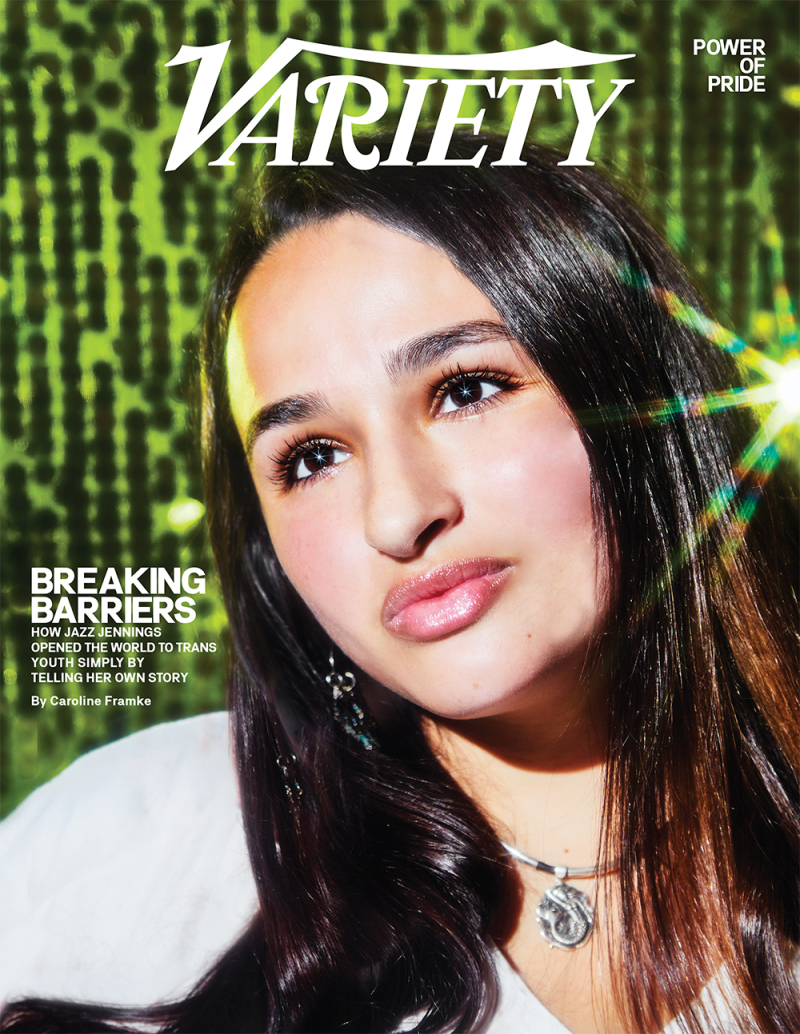 All that Jazz! (Image via Variety)

VARIETY: I encountered Jazz Jennings when she was a li'l kid at a GLAAD event, and it reminded me why GLAAD gets so much less credit than it deserves — they were instrumental in preparing her and her family for her emergence as a high-profile LGBTQ figure, one who went on to astounding social media and TV success. It always bugged me that my tiny clip of her at that event had crazy views mostly so adults could attack her. (Including because she expressed excitement at meeting the cast of Jersey Shore.)

Now, she is on the cover of Variety's Pride Issue, radiant and taking a victory lap. Interestingly, her first high-profile interview was with Barbara Walters, who did right by her, even though Ricky Martin now faults Walters (see above).

From Variety, her reaction to the anti-trans sports bills in the U.S.:

Jennings is horrified by the discriminatory hatred behind the new bills, including the one signed into law the day before this story went live in her home state of Florida, which bans trans girls from playing on girls’ sports teams in public schools. After this interview, Jazz posted a message on Instagram for her 1.1 million followers. “As someone who has experienced discrimination in sports, it makes me feel terrible about the message that laws like this send out to transgender youth,” she wrote. “They may try to take away our sports, our healthcare, and our rights, but they can’t take away our PRIDE!” 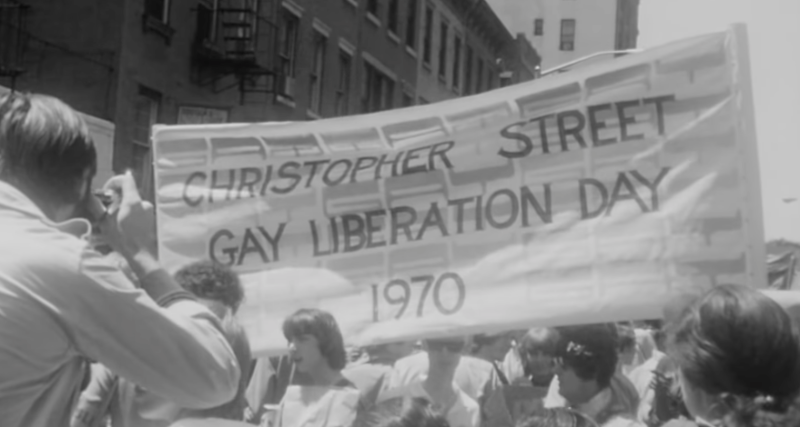 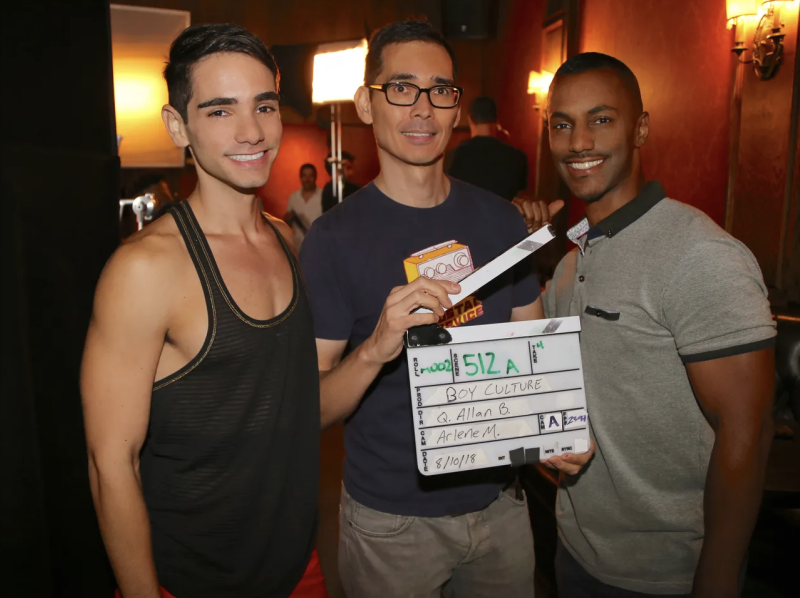 One of my snaps from the making of Boy Culture: The Series (Image by Matthew Rettenmund)

PACIFIC DAILY NEWS: Q. Allan Brocka, with whom I wrote the upcoming (THIS YEAR! THIS SUMMER! PROBABLY IN A FILM FEST FIRST!) series Boy Culture, a sequel to the film of the same name, grants an interview to his hometown newspaper about his achievements as a writer and director. 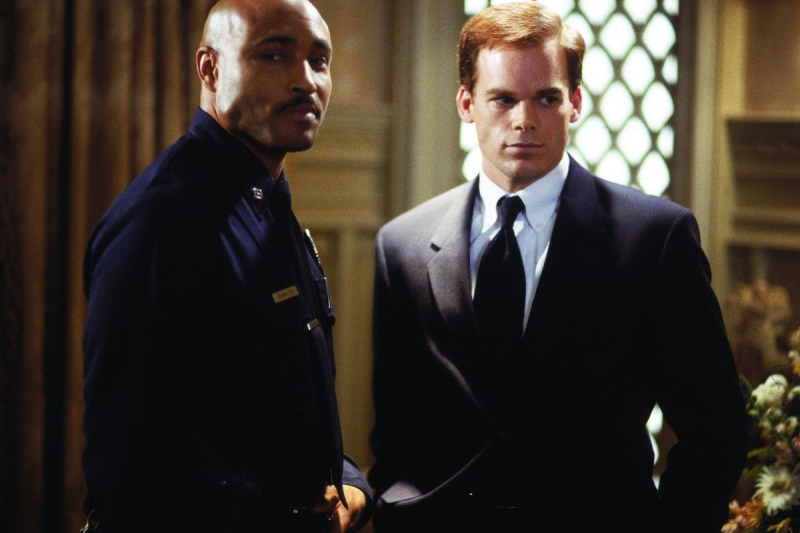 What a difference two decades can make — a gay couple like them was groundbreaking in 2001. (Image via HBO)

There was a lot of pressure in the writers room to break them up so that David could go on embarrassing dates. But for me, it was more important to have David and Keith in a committed relationship and see them dealing with the issues and the problems that arise in committed relationships and it not necessarily being perfect. 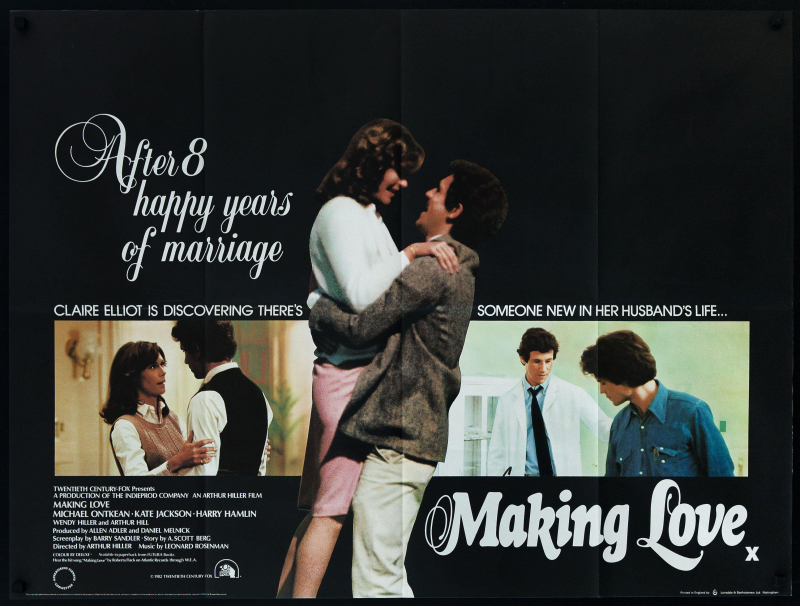 They're not making looove ... (Image via 20th Century Fox)

TWITTER (COME FOLLOW): As it becomes more and more likely I'll abandon this fucking site and retreat to social media, come follow me there! I just posted this clip from Kate Jackson on The Tonight Show in 1982, trying to sell a rowdy audience on her gay flick Making Love:

That time when Kate Jackson had to go on "The Tonight Show" in 1982 to talk up her gay-themed movie as some audience members snickered and some booed. (Big ups to David Brenner, who came to her rescue.) pic.twitter.com/W9Zbo2HCYr 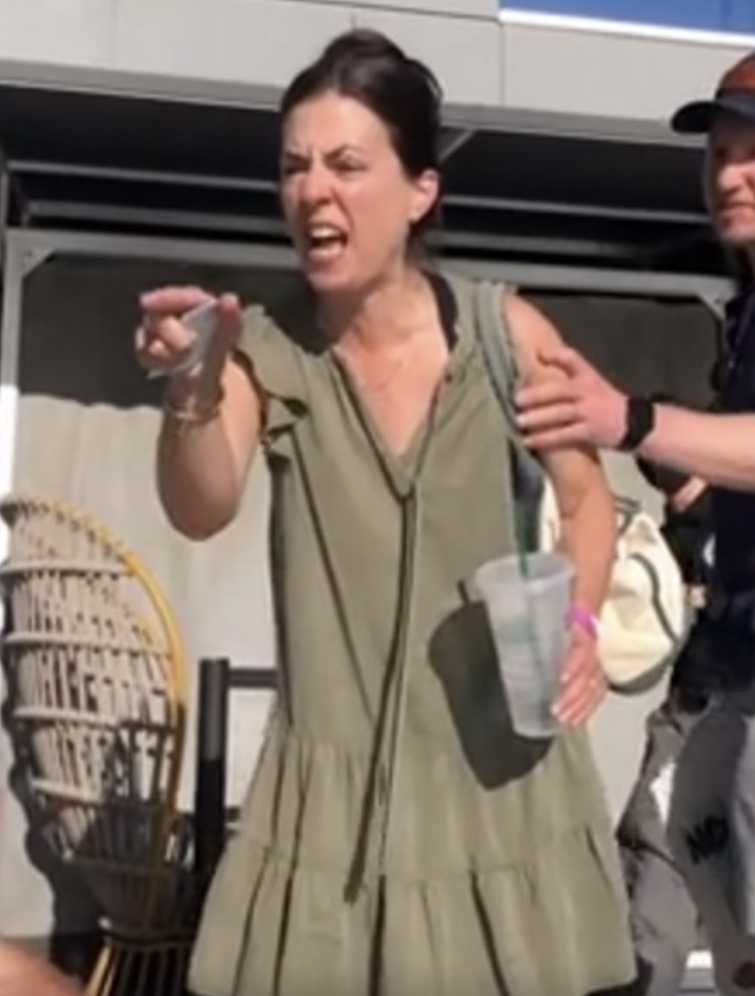 “I have never!” this self-identified Jewish woman from New Jersey (as if these volunteered biographical bits absolve her of prejudice) squawked, cursing in front of the kids she pretended to protect. (Image via video still)

CBS SACRAMENTO: It's 2021, and in Sacramento, some crazy group of homophobes approached two women — surprise! the main woman who was insulted is also a POC — and asked them not to kiss or express affection because there were kids around. Also no surprise, the white chicks called police on the women.

THE BODY SHOP: The Body Shop has debuted a hub to encourage support for the trans community, which is under attack and whose lives (and the issues of sports and where to pee) are being used as a wedge issue by the GOP exactly the way they previously used gay people (and the issue of marriage). 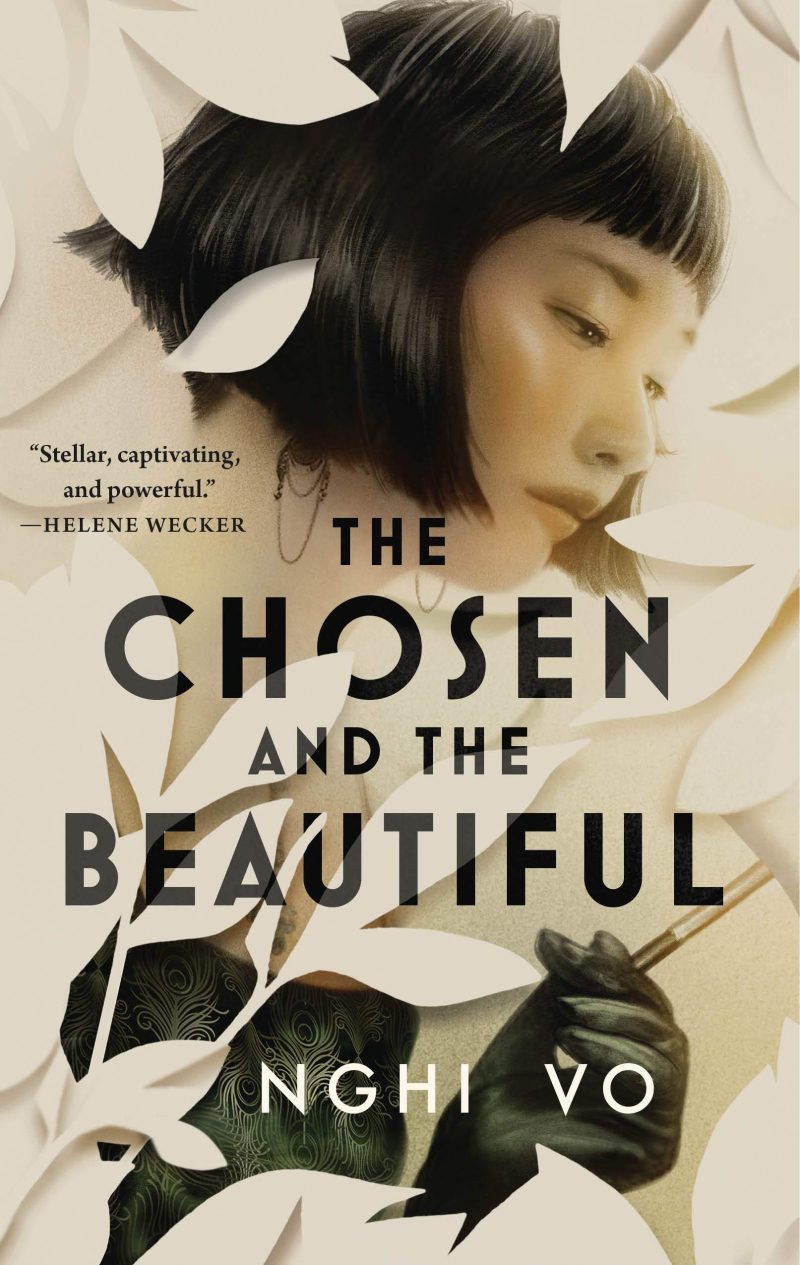 I used to work for a related company — let's just say Tor has expanded its horizons! (Image via Tor)

USA TODAY: Ten reads for Pride Month, including Nghi Vo's The Chosen and the Beautiful, a sci-fi twist on The Great Gatsby.

BWP: Bear Wolf Panda is a new clothing brand for guys who want their men “chunky, hunky and a whole lot-ta funky” — bear that in mind. 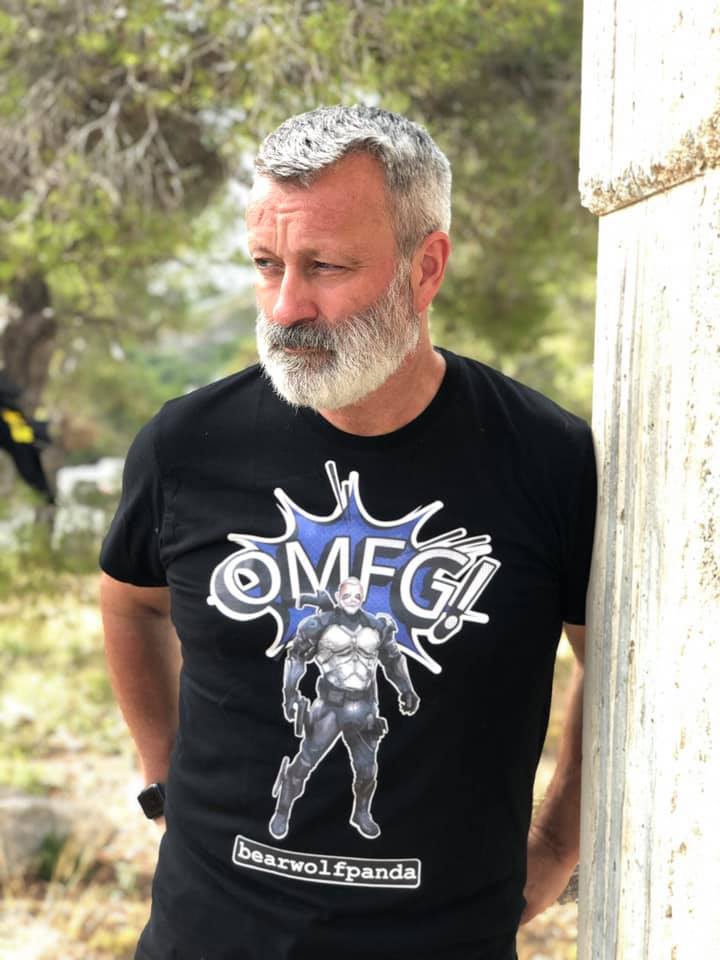