Table Of Contents May Have Shifted: The Mind-Blowing Magazine Archive Of Dr. Steven Lomazow Comments (0) 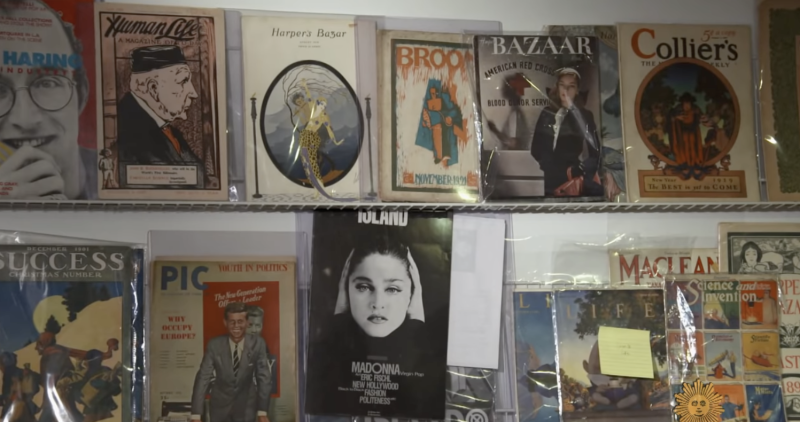 I own the Madonna and Keith Haring magazines from this Lomazow tableau!.(Image via video still)

This piece from today's CBS Sunday Morning profiling Dr. Steven Lomazow, who owns 83,000 magazines, struck a chord with me.

For most of my life, I was a magazine junkie. I would buy a dozen or more new titles every week, devouring their design, their content, their personality. I would keep the ones I liked best, or — more commonly — keep tear sheets. I still have a gigantic collection of tear sheets that I recently digitized.

I also still do own a lot of magazines, though I have not regularly bought from the newsstand in a regular way in years. My collection of beefcake and gay-related magazines is no longer special, but I do have well over 2,000 Madonna cover magazines. Interestingly, one of the magazines Lomazow pulled for a recent exhibition of his collection was the first magazine to feature Madonna on its full cover — Island (1983).

We will never go back to magazines. They were a democratic institution that was eventually voted out. I miss them, and more than that, I miss that love I had for them. I can't be bothered to read a new magazine, let alone buy one, but I do still stoke the embers of that passion by continuing to acquire vintage Madonna covers.

Like Dr. Lomazow, I have a lot of magazines — but also like him, I will never have all of the ones I want. Collectors, hoarders, archivists are all intertwined, and we all share a desire to acquire that fills some kind of hole, harmless or otherwise.