ABOVE: A literal kiss-the-ring moment between Larry Olivier and Lana Turner!

BELOW: Keep reading for queer cartoons, an LGBTQ flag in space, a sixth Dorothy Gale dress has been authenticated and more ... 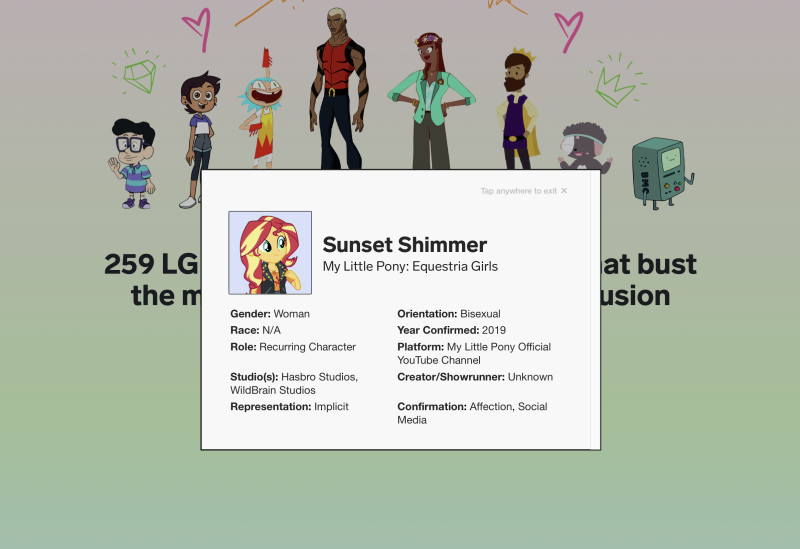 Seek and ye shall find ... (Image via Insider)

INSIDER: A searchable database of 259 LGBTQ characters in cartoons.

JOE.MY.GOD.: Evil Republicans in Texas have advanced an outrageously restrictive voting bill, one that outlaws 24-hour voting and other measures intended to get as many people as possible to vote. Because when people vote, Republicans lose. We are so fucking fucking in 2022 and 2024 if this continues unabated.

POLITICO: New York's next mayor, Democratic (in name only) nominee Eric Adams had a busy weekend — he broke bread with infamous Trumpers and gave an interview in which he said assault weapons aren't so bad, implying it's racist to worry about them more than handguns.

Here is Adams with the Trump mega-donors:

GR8ERDAYS: Catholic University has belatedly located the original Wizard of Oz Dorothy Gale gingham dress gifted to them by Mercedes McCambridge in 1973. It is authenticated, and is one of six known to exist. Imagine ... losing that for 48 years?!

Branson had previously promised to take an LGBTQ flag with him on the journey.