ABOVE: Love what you've done with the place.

BELOW: Keep reading for a COVID scammer, Texas banning abortion outright, just how fucked up Kevin McCarthy really is and more ... 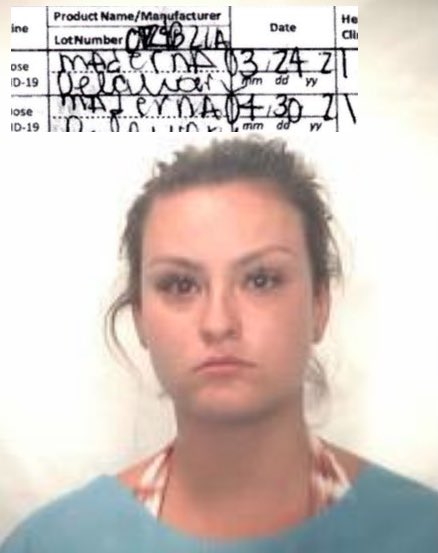 When your name is Mrozak, learn that spelling counts. (Image via mug shot)

FORBES: Chloe Mrozak, a 24-year-old anti-vaxxer from Illinois, decided to travel to Hawaii — a state with an uptick in COVID-19, whose governor has urged people not to come at the moment — with a fake vaccination card. She got caught, in part because the idiot spelled “Moderna” as “Maderna.” What a moran!

HUFF POST: It's basically illegal to have an abortion in Texas now — and the Supreme Court did not intervene. The new law criminalizes abortion after six weeks (most women would not know they're pregnant by then), and even deputizes citizens to help enforce the ban, offering $10K to to anyone found aiding or abetting abortion-seeking women. NO, THIS IS REAL. God forbid they think of other ways to use the $10K. Any woman who is pro-choice and continues to vote red is asking for this. But as for any woman who isn't asking for this, hopefully, they'll have access to these.

TWITTER: Larry Elder is very close to becoming Gov. of California. He's a wifebeater, but he has a great deal of respect for women. Did you know his mom was a woman?

"I have a great deal of respect for women. My mom was a woman."

KEVIN McCARTHY FOLLIES: The man who could feasibly become Speaker of the House if the Dems lose in '22, Kevin McCarthy, is threatening telecom companies not to comply with subpoenas for January 6 records, once had an affair that for some would have been career-ending and has in-laws who took $7M+ in federal and no-bid contracts based on faked Native American identity. (Sen. Elizabeth Warren may want to fire up her Twitter on that last one.) He's a charmer.

THR: Mike Richards' anti-Semitic and misogynistic comments on that old podcast were not the only reason he was shit-canned from Jeopardy!, and at least one former champ is cheering his departure.

QUEERTY: Lance Bass is pushing ABC for an all-gay The Bachelor.

ACE SHOWBIZ: David Archuleta, who came out as a part of the LGBTQIA+ community recently, is still caught up in religiosity, saying his decision to come out was directed by God:

“I was like, 'I don't even remember how it feels to be close to God or to even have feelings for anybody ... I don't even know how I feel about myself right now,'” David continued. He then took a prayer. “When I had that prayer, God just said, 'David, you know I trust you, right? I want you to post about what you're going through right now.' And it was just so clear what I needed to say.”

TMZ: It's 2021 and wedding venues in the U.S. are still blithely denying service to gay people. Because Jesus.

GR8ERDAYS: Yvonne De Carlo would have turned 99 today. And she was more than just Lily Munster — much more. I still remember the shock I felt when I realized years ago that she had been the first to sing “I'm Still Here,” in Follies, on Broadway.

KENNETH IN THE (212): Wrestler looks like he's smuggling ... something.