WAPO: Nicki Minaj is fucking stupid. I don't care about her music. She is fucking stupid. SHE. IS. STUPID. First, she ranted about not getting vaccinated (and then said she plans to get vaccinated — when?), then she brought up an obviously fake story about a friend of a friend claiming his balls were swollen due to the vaccine and blasted it out to her millions of followers. Now that Joy Reid has called her out, she is taking ammo from anti-progressives trying to attack Joy because she's cornered and that's what idiots do — scorched-earth responses. 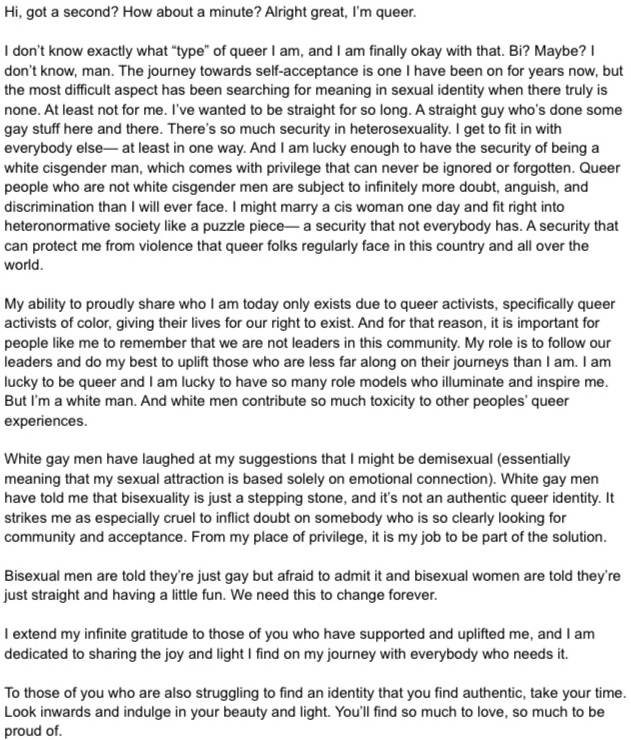 RANDY REPORT: Cameron Kasky, a Parkland Shooting survivor, has come out as queer. He spends a lot of time saying white gay men have belittled him for mentioning demisexuality and bisexuality, but I encourage him to tell roomful of gay Black men he is bisexual — I believe many of them (though not me; I'm with him in the spirit of his complain) would let him down, too. At any rate, welcome out!

NYDN: Another arrest in a horrible screwdriver attack that was also an anti-gay hate crime in Brooklyn.

THE GUARDIAN: Stephanie Grisham claims Melania Trump refused to condemn the violence of January 6 when asked, replying with a simple, “No.” (Some point out that Grisham is loyal to Jared Kushner and Ivanka Trump, so trashing Melania serves a dual purpose.)

a right-wing radio host who used to read the names of people who had died of AIDS in order to mock them, has died of COVID-19. Fuck him and his family and friends.

JOE.MY.GOD.: A Black nurse is guilty of making death threats toward VP Kamala Harris — because she believes Harris isn't really Black. That is what being in the Trump cult does to Black people, it turns them against themselves. (It should go without saying it exists for white people who resent or hate POC.)

GR8ERDAYS: More unearthed gold regarding the late, great Yma Sumac. Alan Eichler, keeper of all things, has uploaded one of her Chicago shows from 1988.

KENNETH IN THE (212): Tennis hotness with Sam Cushing — and more.

CNN: Fox has acquired TMZ from WarnerMedia. Though terms are not clear, what does seem clear is that Harvey Levin has got to be one of the richest and most influential queer people in media. And their site is written at a third-grade level and filled with a lot of pretty outrageous clickbait and other kinds of -bait.

NYT: Here's hoping this piece is right and California votes NO on recalling Gov. Gavin Newsom.

VANITY FAIR: I have no idea what the late artist David Wojnarowicz would have made of his work being part of couture fashion created by Jonathan Anderson and strutted by Dan Levy at the Met Gala:

INSTAGRAM: Celeb birthdays include a-ha's Morten Harket. It's a shame a-ha is considered a sort of one-hit wonder in the U.S. (they had more than one); abroad, they're legends with many popular hits and albums: