Getting Into Good Trouble With Madonna's MADAME X Comments (0) 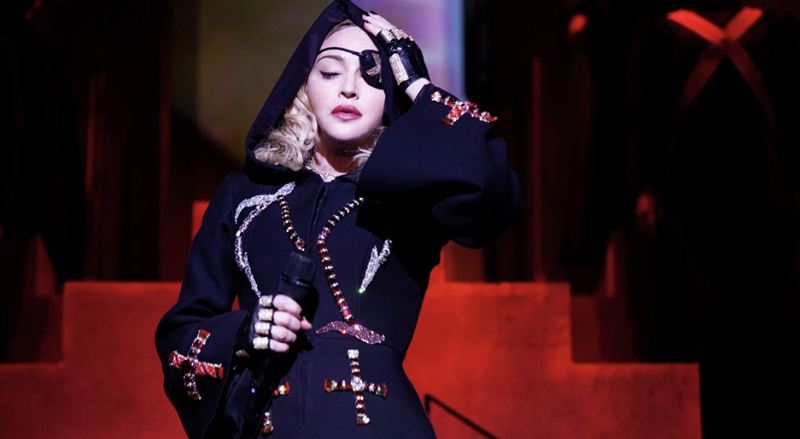 Call her Madame. (Image by Ricard Gomes for Paramount+)

I am the wrong person to come to for exact details of a concert movie, or, really, for a review of a concert movie — I do not like them. I don't re-watch Madonna's spectacular concerts ever, because for me, the live experience is 95% of the entire experience. I only like a concert film if I haven't seen a concert, or as a faithful document of what happened. Though I did like how Truth or Dare handled Blond Ambition, I would definitely like to have also had a straight, pro-shot Blond Ambition video, too.

I really liked Madonna's Madame X Tour — the concept film of which is streaming now on Paramount+ — as a break from her norm and as an intimate concert. The movie she came up with — it is a film by Madonna, but was directed by her photographer of late Ricardo Gomes and SKNX (Sasha Kasiuha and Nuno Xico) — is not a straight documentary, but has no behind-the-scenes elements. It is more like Kenneth Anger in fishnets — yes, it has the dizzying edits some fans hate, but in this case, the edits feel less like they're to amp things up or hide mistakes and more to take a simple theater show and present it in the way it felt to see live.

In this regard, Madame X, the movie, is not what happened, it is what Madonna was trying to communicate. So I'm on board with the edits.

That said, it is still a faithful recording of much of the show. Yes, there are missing songs (“Crave,” probably her most accessible song from the album, though its live rendition was a remix; “Sodade”; and necessarily some of the songs or partial songs she didn't always perform live anyway, like “Papa Don't Preach” — if you miss “Papa,” click here!), but much of the concert is there, with barely noticeable trims.

Visually, the movie is flashy. I get why Paramount+ is pouring promo dollars into it. In my humble opinion, I do not think all the footage is up to snuff for what I would expect from a professionally filmed concert given by an icon, including some iPhone footage. I think this can be chalked up to the fact that Madonna didn't even plan to film it until it was well underway. Due to that lapse, there is some substandard footage that is nonetheless presented creatively; if you like it, it comes off as rock 'n' roll and edgy, and if you don't, it feels like making do with what you've got.

The concert sounds fantastic — it's such a great mix, and I'm so happy she released it as a live album. For me, it is exactly the way it sounded live. Due to the footage issue mentioned, you will encounter passages where she is talking and the audio drops noticeably from sentence to sentence.

Still don't be that fan who is all over social media kvetching that Madonna's Madame X has too many fast edits. Be happy the concert was preserved.

Speaking of edits, I was far less aware, in this concert than in others, of her look dramatically shifting from moment to moment (which happens when several performances of the same song are blended together). Just a few times, her blonde wig looked askew, then neat, then askew on certain songs. Her eyepatch might have vanished once or twice, only to reappear Madge-ically.

Madonna uses this concert to hammer home her overarching, James Baldwin-borrowed mantra about how artists are here to disturb the peace, to turn her classic and new songs into manifestos and to leave viewers revved up about social justice more than leaving them ready to vogue.

For me, my film highlights match my live highlights — “God Control,” “Vogue,” “Like a Prayer” and the majestic “Batuka” — while lowlights (that entire opening is so off-putting and drawn out I can't believe it wasn't trimmed), same.

I don't understand why this took two years, but it's here and it seems to be exactly what Madonna had in mind. Watching it felt like an exorcism of a very long era in Madonna's career, and I'm not exaggerating when I say (because I was lucky enough to be in the same room with her at the premiere in Times Square) that Madonna's relief was palpable as people took it in, cheered and sang along. Drew Barrymore was beside herself over “Like a Prayer.” We should all be as Drew Barrymore as possible.

In other news, Madonna was really fun promoting Madame X on The Tonight Show last night, vamping, being bratty but then settling in to break some news about having turned down the role of Trinity in The Matrix (she R-word-regrets it!) and going into detail as to why she decided to make a movie about her life, in the process calling out Brett Ratner (not by name):

She also gave us her first acting since Will & Grace: