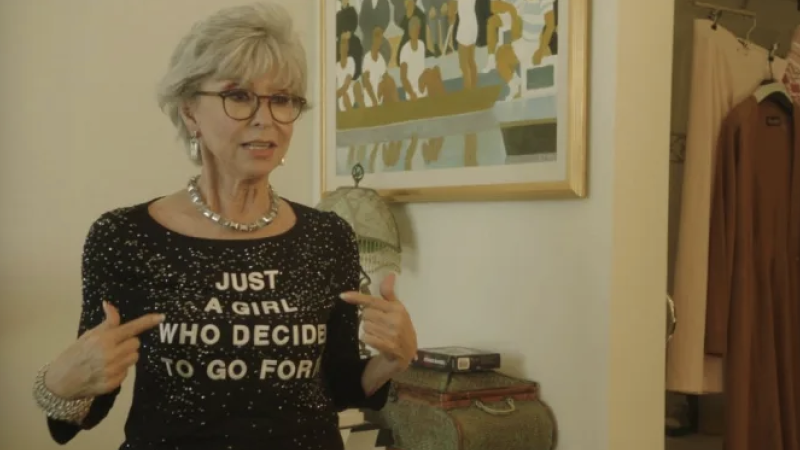 Also disturbing is Moreno's portrait of her emotionally abusive relationship with Marlon Brando, though she expertly defuses the tension in footage from an awards ceremony, where she says, “Have you ever been so obsessed by somebody that you feel as if you can't breathe without them? That's how Marlon felt about himself.”

The quip is emblematic of the self-knowledge Moreno seems to have gained over time, as is a comparison of her famously brief Oscar acceptance speech with her remarkable speeches of late.

The film's title refers to a cheeky T-shirt Moreno semi-recently wore to an award show. She was embracing her ability to do as she pleases, a trait to which we should all aspire.

The doc benefits from the director spending such a long time around the subject, lending the film an authenticity to match Moreno's. Thanks to Pérez Riera, we have a historically important document of one of the country's most enduring and adaptable stars.

Rent Rita Moreno: Just a Girl Who Decided to Go for It on Amazon, or watch it at PBS.org.

The unbearable lightness of being Pete (Image via Amazon Prime)

In breezy Mayor Pete, helmed by Boys State director Jesse Moss, the subject is Pete Buttigieg and the time frame is his historic run for president, starting a year out from the Iowa Caucus. Mayor Pete opened NewFest, the New York LGBTQ+ Film Festival Friday — in spite of the filmmaker not being queer. In my opinion, that disparity could be what leads to a strangely antiseptic snapshot of Buttigieg and his husband Chasten. Or, it could be that Pete and Chasten are better people than they are subjects.

Regardless of why, the handsomely filmed Mayor Pete winds up feeling canned. Far from a warts-and-all document of Buttigieg duking it out in the massive 2020 field of Democrats, the movie's political moments are neutered. It feels like a campaign ad, or at the very least authorized.

The most offputting aspect of Mayor Pete is that whenever it threatens to reveal anything potentially unflattering — at one point, Buttigieg candidly worries a move he makes could seem too “white” — it pulls its punches. Although Buttigieg's lack of appeal among Black voters is addressed, it feels managed. An unfortunate side effect is that because Buttigieg is the film's hero, Black people become the film's villains for not succumbing to his charms.

I like Buttigieg, but I have to say this film, in its effort to push him as a Will Rogers-style, plain-spoken wunderkind, winds up instead preserving his woodenness. The breakout star of the doc is his communications director Lis Smith, who tells it like it is, blurting out that her candidate is coming off like “the fuckin' Tin Man” in one debate-prep session. As a viewer, I longed for Buttigieg to break out of his shell and show some passion, but the movie works against that, pretending that he sort of did in the end and yet arguing that we are wrong to crave that type of performative personality from the introverted, unsettlingly unflappable policy wonk.

This inability to get fired up could be what will keep Buttigieg out of the White House in the future. Even if many of us love to watch him systematically explain issues, his clapbacks lack clap. Even this week, as Buttigieg was roasted for taking paternity leave, the best he could do in response to Tucker Carlson — who called him a “dwarfish fraud” and snarked that Buttigieg, as a gay dad, was probably unable to figure out breastfeeding — was to sniff that Carlson “doesn't understand the concept of bottle-feeding.” No mention of sexism or homophobia. “It feels dirtier than that,” Nicolle Wallace nudged him, and she's right — Buttigieg seems incapable of righteous indignation, and I believe that makes for a documentary that is equally even-keeled. We need encyclopedias, but they're no fun to read.

I liked Mayor Pete far more when it was busy focusing on the Buttigiegs' dorky love story. In one scene, they communicate via pinky taps, a remarkably private detail far more interesting than almost anything else in the film. I was also taken with an scene in which Chasten is trying to tell Pete he feels he should be at his side during the Iowa speech because all the other spouses were, but instead of demanding it — as if aware of the cameras — he passive-aggressively keeps referring to the situation.

I did laugh out loud when Andrew Yang pranced through one scene, a stock villain, as if on cue.

Mayor Pete is an important historical document, but as a movie, it's an also-ran.

Mayor Pete will stream on Amazon Prime from November 12.