The white cop who provided helpful spin for a white domestic terrorist. (Image via video still) 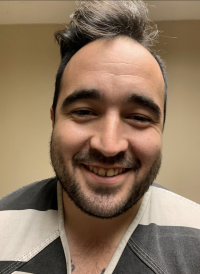 (at right) is a self-confessed domestic terrorist. Why? He is accused of and admits tossing a Molotov cocktail into the Travis County Democratic Party HQ in Austin, Texas. There is no other phrase for it.

And yet, a white cop describing what happened helpfully jumps in to reassure us that Faircloth had “no history of anything like this” and calls it “one of those things” because:

... This person was not happy with the current political climate. He blamed this office and who they represent for a lot of the issues that he saw as problems with the country, and for that reason this was an intentional act, this was the intended target, and that was why he did what he did.

So he is framing this as healthy political disagreement, and clearly — clearly — is imparting his belief that hey, what do you expect people to do when you're a damn Democrat?

He went on to praise him!

He was forthcoming and confessed to that.

All of the above comments (save for having no history) could have been offered by al-Qaeda in discussing Osama bin Laden directing 9/11.

Police in Austin, TX have arrested Ryan Faircloth for throwing a Molotov cocktail into the Travis Co Dem Party HQ: He “was not happy with the current political climate. He blamed this office, and who they represent, for a lot of the issues he saw as problems with the country.” pic.twitter.com/6jfnZi1KOl