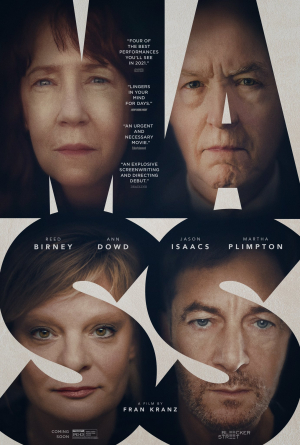 Mass, a gut-wrenching new film written and directed by actor Fran Kranz, heroically takes on the subject of school massacres and delivers it as socially trenchant drama, serving it up My Dinner with Andre-style — all talk about inaction.

After a brief, introductory sequence in a no-frills room inside a small-town house of worship between too-perky church lady Breeda Wool and all-business social worker Michelle N. Carter, Jason Isaacs and Martha Plimpton arrive as the still-grieving parents of one of several high school kids slaughtered by a classmate. The killer's parents, played by Reed Birney and Ann Dowd, arrive in short order to begin the awkward conversation that they all hope will bring some kind of closure, at least more than legal wrangling ever could.

Not the filmed play it feels like, Mass is an original work for the screen. It is also a crash course in acting, with each of the four actors playing parents exuding emotional rawness in such a way as to make it impossible to look away, even when it's painful to hear their questions, or to watch them butt heads.

Dowd is especially fine, the bewildered mother of a cold-blooded killer who wants to understand who her son was at the end of his life without giving up on loving who he used to be.

Plimpton, always a favorite, has never been better. She and Isaacs are mercurial mixtures of anger, despair, confusion, vengeance and yearning as they bat the conversation back and forth with Dowd and Birney, whose characters want to open up — but who, in spite of a mutual agreement, fear anything they say can and will be used against them in a civil suit.

Claustrophobic, Mass is nonetheless a much-needed conversation, one we should all have as Americans as gun violence, bullying and mental-health issues pile up and threaten the sanctity of our democracy by encouraging a cycle of abuse and hatred and — paradoxically — gun mania. The actors ably put human faces on these tragedies, and the end result, while as draining as expected, offers unexpected insight.

Mass is in theaters now.