Kyle Rittenhouse Gets Off On All Charges, Also Gets Off On Killing People + Build Back Better Passes House + LGBTQ-Rights Push In Japan + MORE! — 12-PACK Comments (0)

ABOVE: Something about a man in a robe.

BELOW: Kyle Rittenhouse was driven across state lines with an automatic weapon in order to thrill-kill — and got off, Build Back Better passes the House, Kamala Harris was (briefly) POTUS today and more ... 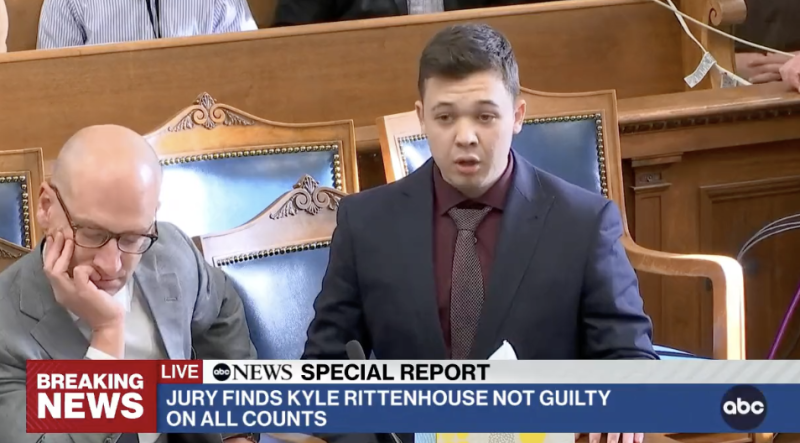 Rittenhouse will now be running around as a gun-nut icon forever. (Image via ABC)

ABC NEWS: A complete travesty — Kyle Rittenhouse found not guilty on all counts. This means open season on all left-wing protesters, and free reign for all right-wingers armed with guns and looking to thrill-kill. The judge, of course, gushed to the jury about how wonderful they were to work with.

HUFF POST: By a vote of 220-213 (one A-hole Dem voted against it), the House has passed the landmark Build Back Better Act, containing lots of good stuff for kids and the climate. Now, on to Joe Manchin's Senate. It passed the House after an eight-hour speech by House Minority Leader Kevin McCarthy, who said ... well, not much of anything sensible.

LGBTQ NATION: Kamala Harris became the first woman to having presidential powers this morning when POTUS Biden went under for a colonoscopy.

THE ATLANTIC: Sarah Schulman's Let the Record Show gets a rave.

EXTRATV: Joe Exotic is being moved to a new federal center, one with advanced medical resources, amid his prostate cancer battle.

THE ECONOMIST: Japan's support of LGBTQ rights is on the rise — but conservatives in high places are pushing back.

YOUTUBE: Lin-Manuel Miranda's tick, tick...BOOM! debuts on Netflix today (it's senSAtional). In honor of the big bow, watch this so-called High School Edition of the rousing “Louder Than Words” from the film: