Always Someone There To Remind Her: A Review Of LAST NIGHT IN SOHO Comments (0) 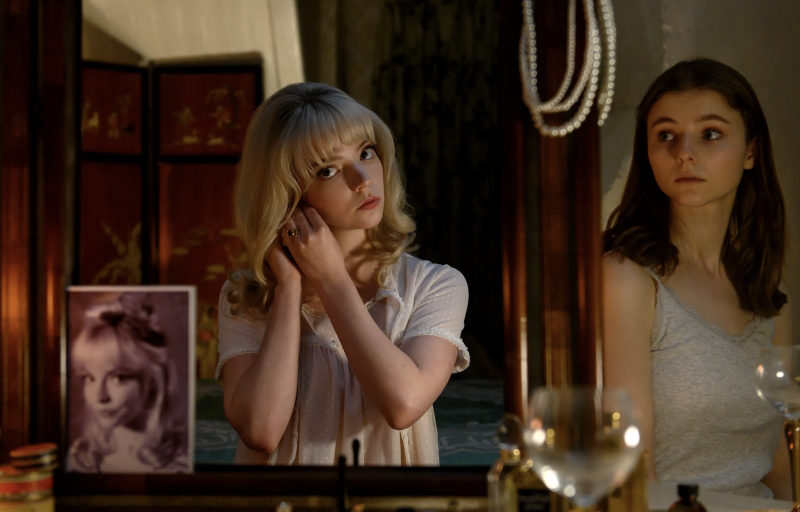 In Last Night in Soho — 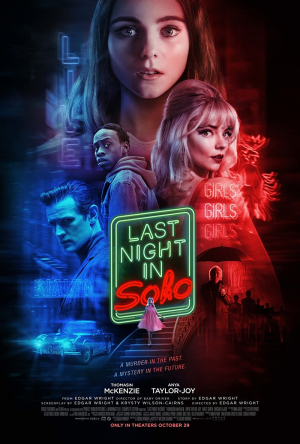 a more-fun-than-average, slick horror flick that shotgun-marries Suspiria (the good one) and Promising Young Woman — aspiring fashion designer Eloise (Thomasin McKenzie) arrives in the big city to attend school, armed with the haunting memory of her mom, a suicide, and a warning from her gran: London is a bad place.

This plays out quickly in the form of a pack of mean girls led by her roommate Jocasta (Synnøve Karlsen) — but we ain't seen nothin' yet. Moving out to escape bullying, Ellie rents a room from Ms. Collins (Diana Rigg, in her final film role) and begins having visions of an entrancing young girl named Sandie (Anya Taylor-Smith) who came to London to be a singer and was instead exploited and brutally murdered by her pimp (Matt Smith) 55 years earlier, in the 1960s, the decade that has always informed Ellie's aesthetic, and that has always seemed to be the time in which she should have been born.

Her visions intensify, and she finds the saloon her visions have shown her was Sandie's place of business, then begins to suspect Sandie may have lived — and died — in the very room she is renting.

of this sounds barely above genre norms, it is; the real fun is the stunning set design and cinematography. But if you don't mind some stylish slaughter blended with somewhat inconsistent feminist messaging, Last Night in Soho is nearly riveting.

Perhaps the most compelling aspect is how filmmaker Edgar Wright persuaded this stellar cast that Last Night in Soho is to die for. Whatever his spell over them, it worked — everyone is hypnotic, most of all McKenzie, who calls to mind Sissy Spacek in Carrie as we and she decide exactly how reliable a narrator she is.

P.S. The film is a noteworthy, morbid curiosity for containing the final performances of Diana Rigg (who seems to have been enjoying herself) and Goldfinger's Margaret Nolan. Both women died in 2020, shortly after production wrapped.

Last Night in Soho is in theaters now.