BELOW: Keep reading for, well, it goes downhill from Luke Macfarlane, but it's still interesting  ... You don't gay! (GIF via GIPHY)

DAILYMAIL.COM: Hugo Weaving, now 61, tells it like it is re: the reason why no gay actors were hired for The Adventures of Priscilla, Queen of the Desert — no gay actors wanted to play gay then.

A beautiful night at the Lincoln Memorial interrupted by demonstrators chanting “reclaim America.“ The crowd gave them the finger and exchanged profanities. pic.twitter.com/Z2voculi9Z

TWITTER: Fascists march on D.C. Armed confrontation is inevitable. Will the police/military help ... the right side?

KCRW: Disney's new Board chair is a lesbian — Susan Arnold. 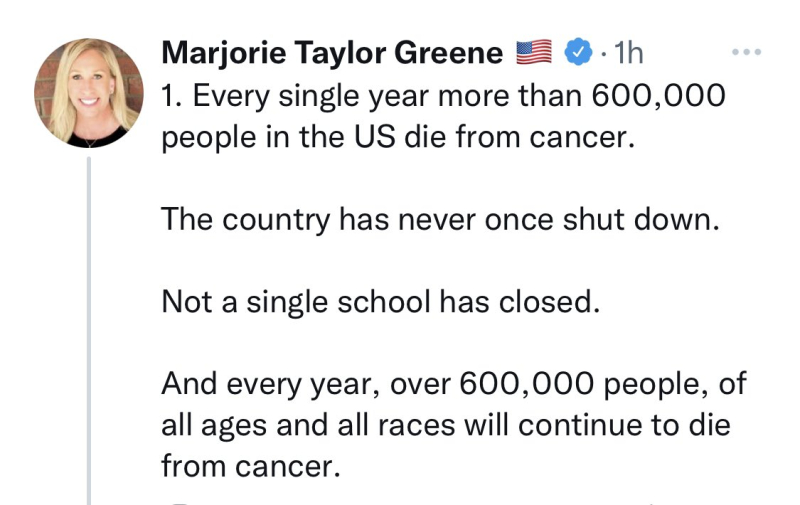 This person is a member of the House of Representatives. (Image via Twitter)

TWITTER: Rep. Marjorie Taylor Greene (R-Georgia) thinks the lack of a shut-down over cancer is comparable to shut-downs over COVID-19.

Here is @manueloliver00 - father of Parkland victim - reacting to GOP Rep. Massie's tweet of his family holding a bunch of guns right after another mass shooting in America: "the worst taste ever... a very nasty post." pic.twitter.com/8XQKFMjWzx