ABOVE: All the singlet laddies. 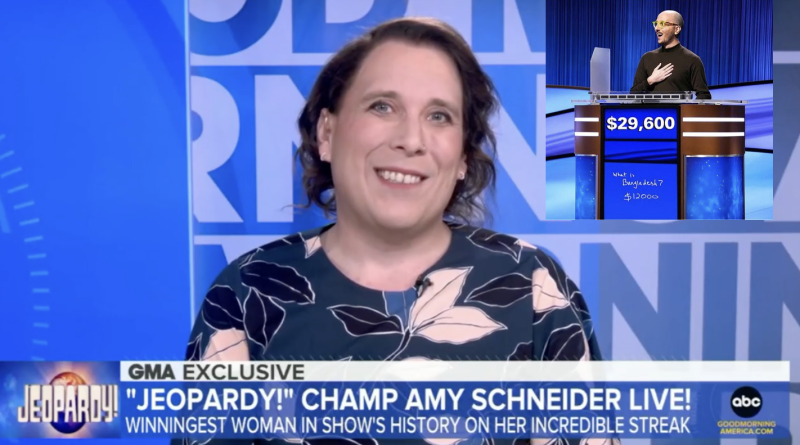 WAPO: It's over! Anti-queer people who were uncomfortable watching Amy Schneider kick ass on Jeopardy! — becoming the woman with the longest-ever winning streak — can breathe a sigh of relief that she's been defeated.

DEADLINE: PGA noms are out — no House of Gucci, no No Time to Die, no Spider-Man, no The Lost Daughter. But a great list.

YOUTUBE: “No, you can't buy our house. You can't even look at it! Because you're gay.” I still am flabbergasted that these guys think talking about this in the media BUT NOT taking legal action qualifies as “doing something” about this. As the legal expert on-set says, this is a slam-dunk case. When queer people are discriminated against, who does it benefit, exactly, to complain about it — and then allow the illegal discrimination to happen? Baffling. Seem like nice guys. Hope they will come around and take action; they seem squishy on whether they'd sue.

CBS NEWS: The ping-pong Pope is back to pro-gay, urging parents never to reject their gay kids. Sorry, to “never condemn” them.

TWITTER: Rafael Alencar, who sounds ... off ... is flagrantly outing two of Hollywood's biggest stars, one of whom has a history of suing the fuck out of people for this.

WOW REPORT: Janet Jackson emotionally responds to those rumors that she had a secret child who was raised by Rebbie Jackson.

NYT: Neil Young has integrity, and Spotify does not (which is easy to do when you're a corporation). But I still remember his poorly made music video for “This Note's for You” — which really hasn't aged well, mocking Black icon Michael Jackson being set ablaze and Black icon (how was she in any way more of a sell-out than any number of other pop artists?!) Whitney Houston having her wig yanked off — beating Michael Jackson's visually jaw-dropping “Leave Me Alone” and Madonna's sublime “Like a Prayer” for Video of the Year at the MTV Video Music Awards. I got his point, but it was transparently desperate for MTV to reward him after initially refusing to even play the video and while still being everything the video despised. But I'll forgive him if we can get an updated video with Joe Rogan on fire and Rand Paul's wig being snatched.