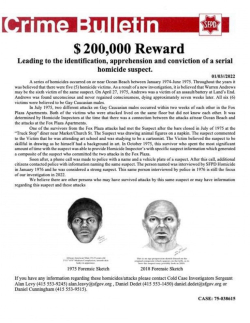 The gay serial killer dubbed the Black Doodler or just the Doodler continues to make news — 48 years after his first suspected kill.

The elusive killer, who was based in San Francisco, was dubbed the Doodler because one surviving victim said he met the man at a diner, where he was doodling animal figures on a napkin.

For decades, five homicides were linked to the Doodler, beginning with a January 27, 1974, killing. All were white men who were stabbed, and all were thought to be gay.

Now, another death — Warren Andrews, who died weeks after being found unconscious in a park in 1975 — has been added to the list of killings attributed to the Doodler.

In light of the new information, cops have upped the reward for information to $200,000.

Interestingly, police say they interviewed a suspect in 1976 — and that the man is still their focus 46 years later.