ABOVE: Are you an athletic supporter?

BELOW: Keep reading for some queer history on the cheap, Goldie Hawn throwing her lot in with Megyn Kelly, Sarah Palin gets COVID-19 and more ...

DAILY MAIL: Meet Irish soccer coach Shane McInerney, who refused to wear a mask on a transatlantic flight — he was coming to Florida for a job, so had probably been told Florida is cool with the plague — and mooned staff and passengers on his flight. He was so belligerent he was arrested, and he could in theory get 20 years in prison. Which he won't, but I'd like to see some of these assholes who disrupt flights dealt with more severely than they usually are. A lifetime ban from various airlines would make returning to Ireland a joy for him. 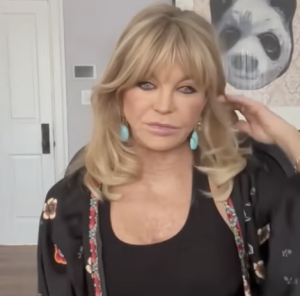 Goldie Hawn disappoints me — not because she said she believes entertainers should entertain everyone, which is reasonable, but because she chose Megyn Kelly's show as the venue to say this. Megyn Kelly is explicitly far-right, and has said many things to make it clear she's a white supremacist. You can be apolitical without talking with political talking heads, no? Easy enough to avoid all politics-based venues.

A lot of Hollywood has a lot of missions, right? And you know, you want to put your name onto something that you believe in, but it doesn’t make a difference. And that’s the reality.

DAILY BEAST: Sarah Palin, unvaxxed, tests positive for COVID-19. Fingers. Are. Crossed. (But if Trump lived through it unvaxxed, I think she'll live to drool another day.)

TWITTER: It's a shame and a scandal, but RFK Jr.'s anti-vaxxer views are really his vocation. He spent the weekend speaking to a D.C. rally peopled by anti-vaxxer anti-maskers, and compared our government's response to COVID-19 to Nazi Germany.

At the antivaxx rally in DC, RFK Jr. says that in the future "none of us can run and none of us can hide" because of Bill Gates' satellites and also 5G, unlike... the Holocaust.

"Even in Hitler's Germany, you could hide in the attic like Anne Frank did." pic.twitter.com/bRtmDBTxZl

We have to assume Cheryl Hines is on board with this lunacy — they're married and live together. Also worth noting: Why is QAnon so married to the idea of finding JFK Jr. alive when RFK Jr. is demonstrably alive and probably on board with most of their beliefs?

MOTHER JONES: White people are far more likely to have received monoclonals while battling COVID-19 ... which is why Trump said white people are discriminated against when it comes to the virus. It's always opposite, it's always accusing the other side of what your side is doing.