ABOVE: I think I've captured the spirit of the day.

BELOW: Keep reading for how Meta is snatching accounts with no accountability, Biden bans U.S. imports of Russian oil, Emmett Till Anti-Lynching Act finally passes, Florida has passed the repulsive Don't Say Gay bill and more ... 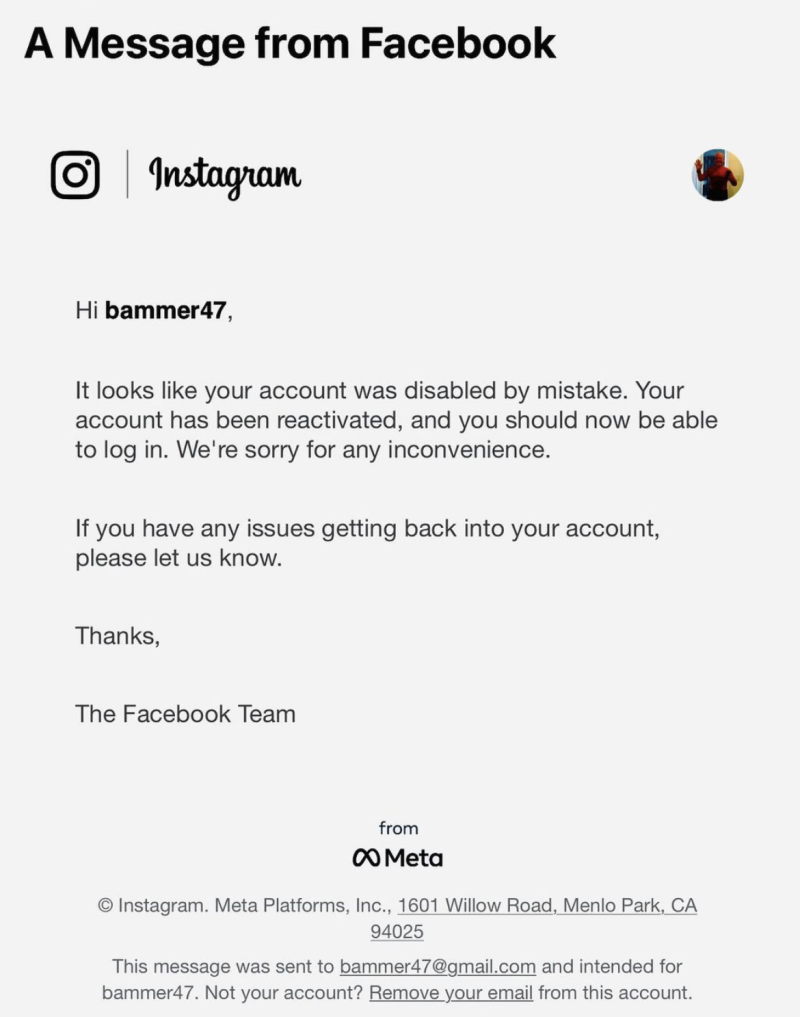 INSTAGRAM: @Bammer47, the invaluable gay-history account on IG, was removed by Meta on February 20 with no warning or explanation. After weeks of believing his account was gone forever and its content expunged, Mike Balaban was finally relieved to be told it was removed by mistake. The only reason — THE ONLY REASON — he got this account back is through back channels. Even public pressure seemed to do nothing to aid his cause.

Accounts with a queer vibe (and others) are disappearing all over the place. Some are removed for alleged rules violations, while others are hacked — and Meta's lack of customer support leads to them being unrecoverable. So far, @webo1958, the best Madonna archive on IG, is still hacked, and is being run by people based in Nigeria who are sending links to other accounts in an effort to hack them. Meta has not helped at all.

There should be a law against failing to provide customer service, particularly when the companies have virtual monopolies in the relatively new field of social media.

HUFF POST: McDonald's, Coca-Cola, PepsiCo, Starbucks — these are just a few of the companies doing business as usual with Russia, even as most of the rest of the world grapples with potentially self-damaging ways to choke the country financially to help end the invasion of Ukraine. Meanwhile, President Biden has answered the call to ban Russian oil imports, a move that is thought to be devastating to Russia — but that will also inflate already high prices at the pump in the U.S.

BLOOMBERG: Biden to take on the crypto industry. Finally, SOME kind of oversight:

President Joe Biden is set to sign an executive order this week that will outline the U.S. government’s strategy for cryptocurrencies, according to people familiar with the administration’s plans.

The order will direct federal agencies to examine potential regulatory changes, as well as the national security and economic impact of digital assets, said the people, who asked not to be named discussing the deliberations. The White House’s approach to crypto has attracted fresh attention in recent weeks after the U.S. and its allies levied sanctions on Russia, prompting concerns that organizations and individuals could use crypto to evade the restrictions.

TIMES U.K.: A Russian whistleblower is stating that the Ukraine invasion will be a bust, and will end like things did for Hitler at the end of WWII ... except Russia's position is starting there.

SOCIALITE LIFE: Though he had previously apologized for it, Kevin Spacey is now stating under oath he never sexually assaulted Anthony Rapp. I guess that means the apology is withdrawn.

Make sure to share this video and call on Senator Garcia to resign. pic.twitter.com/f4elJZ6Wq4

Republican State Senator Ileana Garcia starts her debate in support for the “don’t say gay” bill by saying being gay is “not permanent” and saying this bill, which prohibits LGBTQ topics in schools is a “good topic for happy hour”. Offensive and ignorant. pic.twitter.com/eSd4OpbjYv

TWITTER: Florida has a bunch of fucking idiots in its state senate. Case in point: State Sen. Ileana Garcia, who says being gay is not permanent. Fucking florida passed the Don't Say Gay law anyway. Now, DeSantis will likely enshrine it into state law.

NBC NEWS: Congress FINALLY  pased the Emmett Till Anti-Lynching Act. Now, Biden will likely enshrine it into federal law. (Not the different in the priorities of the last two items.)

TWITTER: Jen Psaki could murder someone every day and get away with it. And does:

Jen Psaki to Fox News’ Peter Doocy on oil production in the U.S.: 'Let me give you the facts here, and I know that can be inconvenient, but I think they're important in this moment’ pic.twitter.com/htu1vb0V6C