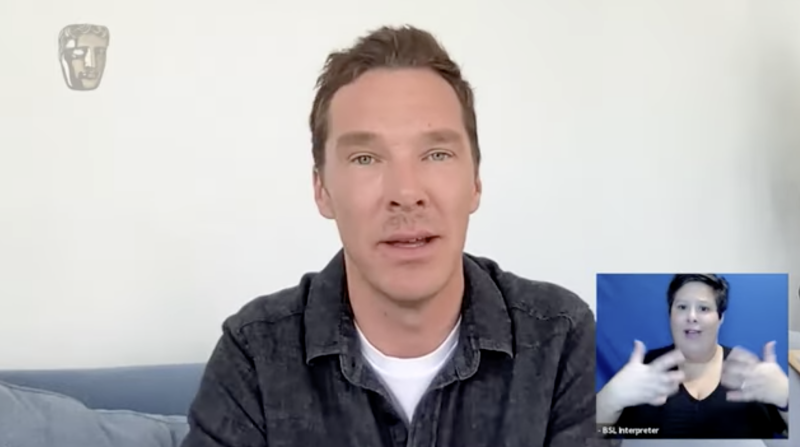 Cumberbatch has thought things through more than Elliott has. (Image via video still)

Benedict Cumberbatch is responding to Sam Elliott's ridiculously homophobic take on The Power of the Dog without calling him out by name, saying in a new BAFTA Film Sessions interview:

I'm trying very hard not to say anything about a very odd reaction that happened the other day on a radio podcast over here. Without meaning to sort of stir over the ashes of that, it's, it just — I won't get into the details of it, if it's hit the news at home, it has, it has here — but someone really took offense to ... I haven't heard it, so it's unfair, really, for me to comment in detail on it ... but, really took offense to the West being portrayed in this way. And beyond that reaction, that sort of denial that anybody could have any other than a heteronormative existence because of what they do for a living or where they're born, there's also a massive intolerance within the world at large towards homosexuality still, towards an acceptance of the other, of any kind of difference, and no more so, I guess, in this prism of conformity, in the sense of what is expected of a man in the sort of the western archetype mold of masculinity ... To look at that, it's not a history lesson. Need we look much further than what is going on in Russia at the moment to understand that somewhere in the mind-boggling idiocy of that man's megalomania is some damage, there's some damage there; we saw it in a president of the country that's hosting me at the moment. These people still exist in our world, whether it's on our doorstep or whether it's down the road or whether it's someone we meet at a bar or a pub or, I don't know, on a sports field. There is aggression and anger and frustration and an inability to control or know who you are in that moment that causes damage to that person ... and damage to others around them.