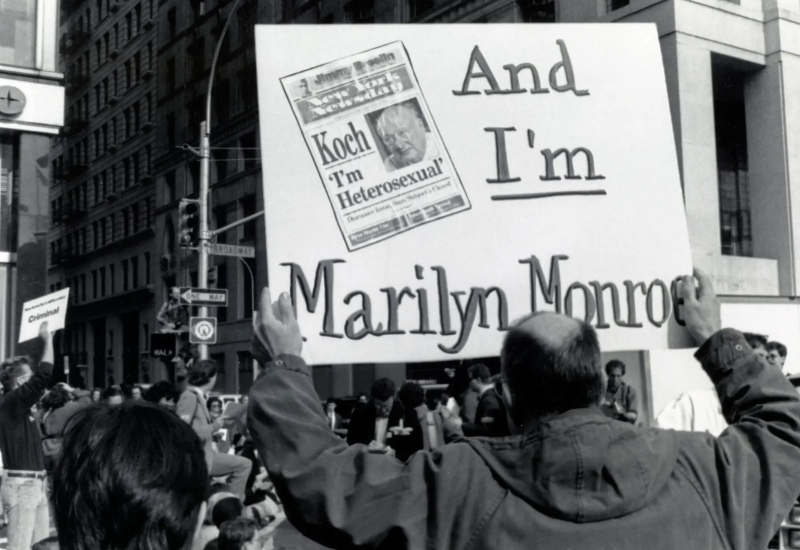 Self-loathing gay men in positions of power have not worked out for us historically. (Image via NYPL)

NYT: Ed Koch was a vile toad, and a great example of why oh-let's-let-everyone-come-out-in-their-own-tiiiime is bullshit when it comes to well-established, well-protected, grown-ass adults in positions of power. This piece reminds us of what an appalling waste of space Koch was, doing great harm during the AIDS crisis, and then — for good measure — endorsing Republicans on his way out the door. Rot in disarray, Ed.

TWITTER: NYFD says individual screaming at women that he now owns their bodies and they will be forced to have his babies is not a firefighter. (But who is he? Likely the son of one, likely he didn't choose that garment casually and likely the NYFD waited until today to disavow-ish it in order to let it sink in.)

ST. LOUIS POST-DISPATCH: The fact that so many are “Young, Transgender and Targeted” is precisely why we need to stop obsessing over saving girls' sports and other right-wing-framed issues on this topic — states are quickly lining up to outlaw trans-affirming care. Missouri is even looking at making it illegal for adults to transition.

HUFF POST: Ex-Pentagon chief Mark Esper says — in for-profit, way-too-late book — that he had to shoot down dangerous Trump ideas every few weeks.

Dave Rubin: "We know nothing about [Karine Jean-Pierre], other than the most important thing - she's a Black “lesbo.” And for that, she's got the gig" pic.twitter.com/jckY78ZfCN

TWITTER: Gay right-wing douchebag Dave Rubin sneers that Karine Jean-Pierre is nothing but a Black lesbo.

PEOPLE: Kim Kardashian — who wore one Marilyn Monroe dress and tried on another — was given a lock of Monroe's hair by Ripley's Believe It or Not. And, well, one expert doesn't believe it — he has the receipt(s) to show the hair is fake.

CNN: The Tony Award nominations are out, and so is Beanie Feldstein for her widely derided star turn in Funny Girl. P.S. MJ scored 10 nominations — talk to me again about cancel culture being an issue.

Linda Gerard, standby for Fanny Brice in FUNNY GIRL for most of the original Broadway run, sings "I'm the Greatest Star" in 1966. pic.twitter.com/oioSNojq0T