BELOW: Keep reading for the gay valedictorian who used his hair to make a point, Gervais joining the anti-trans brigade, Dorothy's dress and more ... 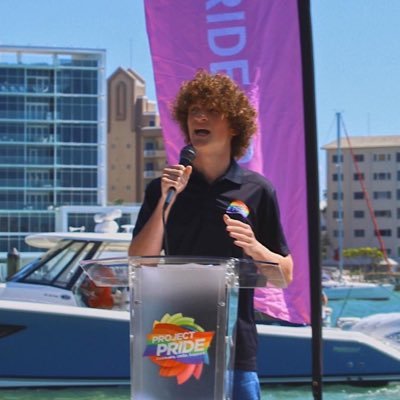 It's not the heat, it's the humidity. (Image via Twitter)

NBC NEWS: Valedictorian Zander Moricz was told not to say gay (yes, he's in Florida) in his grad speech. So he subbed “curly hair.” This is 2022:

THE ATLANTIC: When being gay was the gravest sin in D.C. James Kirchick's history of Bob Waldron is a must-read as we careen backwards daily on LGBTQ rights.

VARIETY: Jumping on some insane bandwagon we don't need, Ricky Gervais has loaded his latest comedy special with — SURPRISE! — ugly trans jokes about dicks and trans women raping other women in public toilets. Then, he ends, with the reassurance that he's way into trans rights. Why is this punching down so chic at the moment? George Carlin was all about free speech, but he wouldn't be wasting his on trashing trans people in 2022. Can we swap Carlin for Gervais?

PEOPLE: NBA star Dwyane Wade, the proud dad of a trans daughter, gave a commencement speech in which he embraced solitude:

In these moments when I truly feel fear, I create space for solitude. In solitude, I find understanding and I create solutions ... In solitude there is nothing that would get in the way of creating the life that you want, except you.

DETROIT NEWS: The two top contenders for the Republican nomination for governor in Michigan have been barred from making the ballot over a scandal involving THOUSANDS of faked signatures.

RAW STORY: Trump considered a military coup — could it have worked?

NYT: The xx singer Oliver Sim is releasing his solo album Hideous Bastard and coming out as HIV positive.

ONLYFANS (I INVITE YOU TO JOIN): Feel free to sign up for my photography OnlyFans!

WAPO: Dorothy's gingham dress (one of 'em) will NOT be auctioned off after all. The niece believes the garment belongs in her no-place-like-home.

FACEBOOK: Leslie Jordan lost his mother, and is dealing with it through humor:

TWITTER: David Perdue lied through his teeth in a new attack on Stacey Abrams, not too subtly telling her to go back to where she came from:

Perdue on Abrams: She’s not from here. My inclination is to say “you don’t like it, go back to where you came from” pic.twitter.com/nI3o1EPL1t