BELOW: Keep reading for Michael B. Jordan, Elvira, a gay Independent in California, John Waters > Donald Trump and more ...

SOCIALITE LIFE: So ... Michael B. Jordan is single.

I can see why she feared her audience might not be thrilled to learn she is into chicks and is a mommy. (GIF via GIPHY)

VARIETY: Cassandra Peterson, Elvira to you, is opening up about the freedom she has felt since coming out as lesbian. She's also telling Variety why she waited until her 70s. I'd love to ask her about her relationship with Bill Cable!

ESPN: St. Louis Cardinals rookie Brendan Donovan is ever-so-sorry for homophobic old tweets. (But also, like, he's 25 and they were from 2011 and 2013.)

HUFF POST: Gay mom who was a Republican — UNTIL 2018 — now trying to pass herself off as an Independent.

YAHOO!: Another Epstein associate takes his own life. (I'm not sure why people find Epstein-related suicides suspicious — if you're credibly accused of child rape, not to mention old, what's the point of sticking around to fight it?)

SF CHRONICLE: Two women who used drugs while pregnant and whose children were stillborn are being charged with murder. 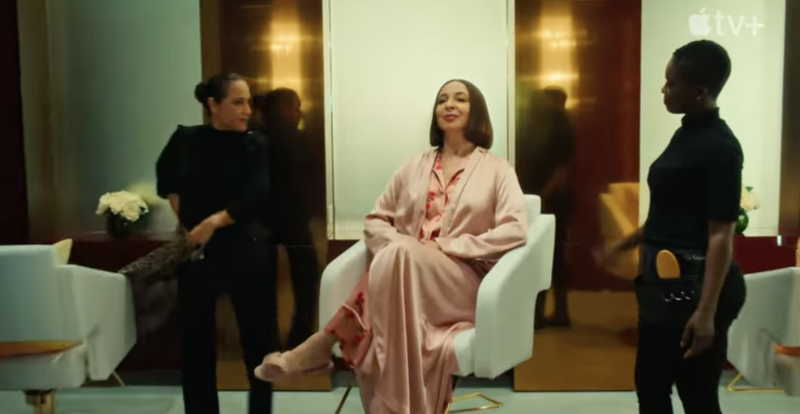 In the pink (Image via video still)

OMG.BLOG!: Maya Rudolph plays a rich woman starting her life over in Loot.

INSTAGRAM (FOLLOWS APPRECIATED): I used to watch my mom's soaps in the '70s. Now, I can't imagine her watching one any more than I can imagine myself watching one! But Bill Hayes was hot before DAD was a thing. And he's now 97 years old!