Reminder that Kanye West's publicist was filmed trying to pressure Ruby Freeman to falsely admit to election crimes against Trump. 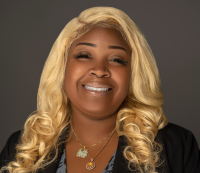 After compelling testimony before Congress on Tuesday, Ruby Freeman and Wandrea “Shaye” Moss became instant heroes. The mother-daughter duo of election officials spoke emotionally of the threats and intimidation they had to endure at the hands of Trump's thugs.

Last night, Rachel Maddow connected some important dots, reminding us that Wandrea is the woman who received a menacing visit from Kanye West's publicist Trevian Kutti ... one that continued at a police station, where it was filmed.

This woman is a monster for browbeating women doing their job. All to further the useless cause of failed presidential crackpot Kanye West.