ABOVE: When Polaroids look this good, you're set on that shoot turning out.

BELOW: Keep reading for a bias attack, Elon Musk's scorched-earth lack of integrity, a Parkland dad goes after Biden (because of course) and more ... Harmony Vuitton is speaking out to encourage, not to instill fear in, others. (Image via video still)

ABC7: Two gay men who were assaulted and slashed for simply EXISTING are talking about their ordeal.

YAHOO! BUSINESS: Elon Musk's unsurprising decision to walk away from his Twitter deal — reneging without any consequences, save the outcome of a costly court battle — means he may have accomplished what he set out to do: Rake in new right-wing fans and destroy the platform. Unreal that this is legal, but as this analyst writes:

JOE.MY.GOD.: Parkland dad shouting down the wrong person on gun control. The U.S. is made up of uncivilized and civilized parts, as well as portions with both factions battling it out as we speak, so any U.S. president has to work with what he's got. Do I want more fire? Yes. Is there a lot more Biden can do on issues with the Senate as it currently is? No, not a lot.

HUFF POST: That said, Biden is considering declaring a public emergency re abortion.

YOUTUBE: Rage Against the Machine reforms for first gig in a decade — urges: ABORT THE SUPREME COURT.

REUTERS: In France, gay men, some trans folk and sex workers are urged to get the monkeypox vax.

PEOPLE: How do you go for 20 years with a growing cyst under your hat before finally deciding it should be removed? This thing has a hat of its own.

SOCIALITE LIFE: Shawn Mendes has postponed his current tour to focus on his mental health.

FOLLOW HERE: My video of a shirtless Michael Cimino is blowing up! 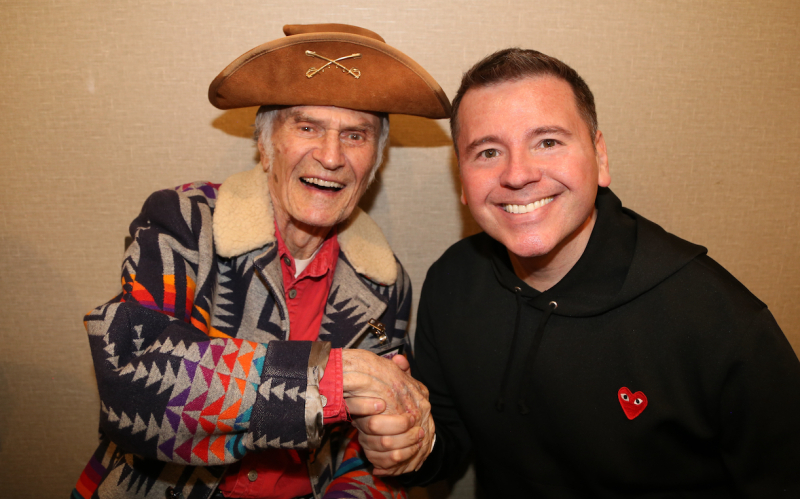 Met Larry at one of the last autograph shows I attended — this was 2019. He was 96! (Image by Matthew Rettenmund)

INSTAGRAM: Yul Brynner was such a gorgeous man, and his nude modeling for George Platt Lynes was THE BEST: