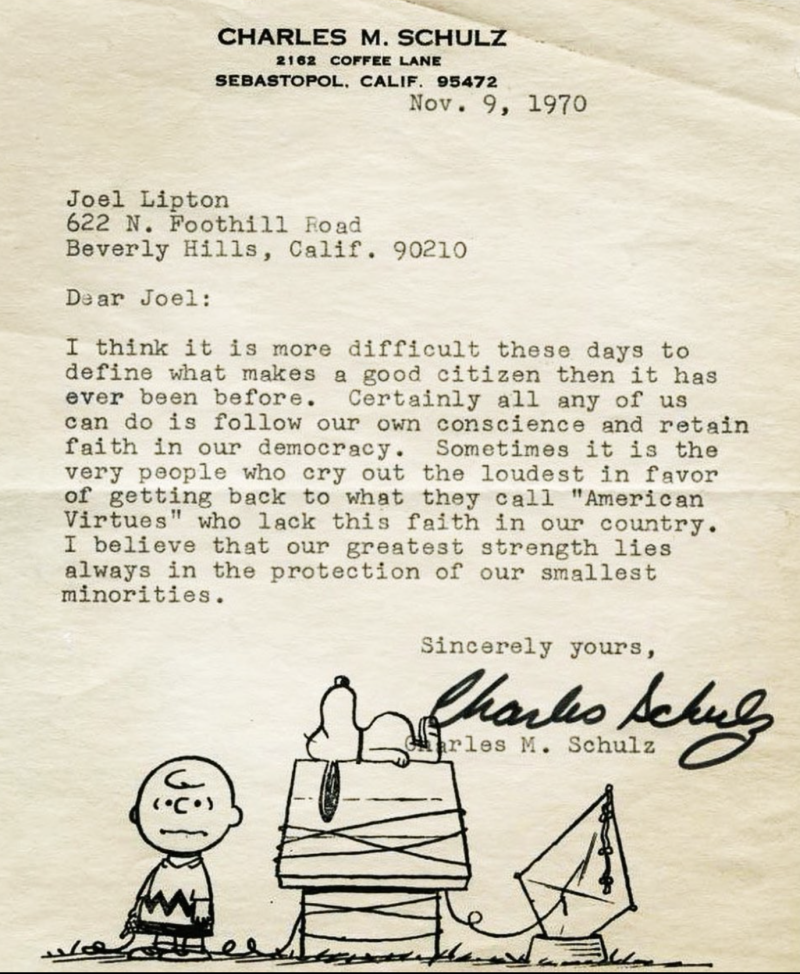 Sent to a kid who asked what it meant to be a good citizen, circa 1970. (Image via Joel Lipton) 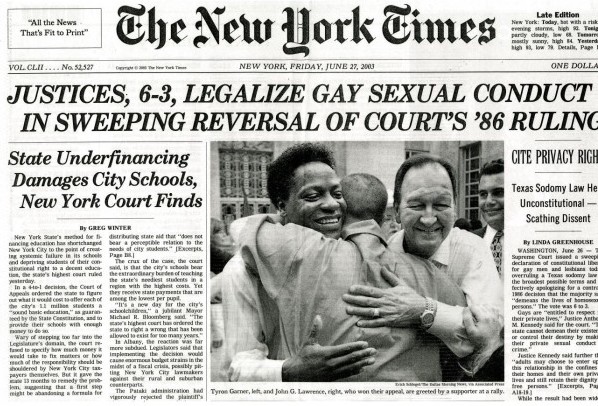 Gay sex was illegal in many states until 2003. (Image via NYT)

XTRA: Texas AG Ken Paxton — who has been under indictment since 2015 for felony securities fraud, in a case that mysteriously never seems to come to court — is ready, willing and able to ban gay sex in Texas. Ban it outright.

Here he is again, telegraphing his intentions.

LAVENDER: Three men sentenced to death by stoning for being gay in Nigeria. 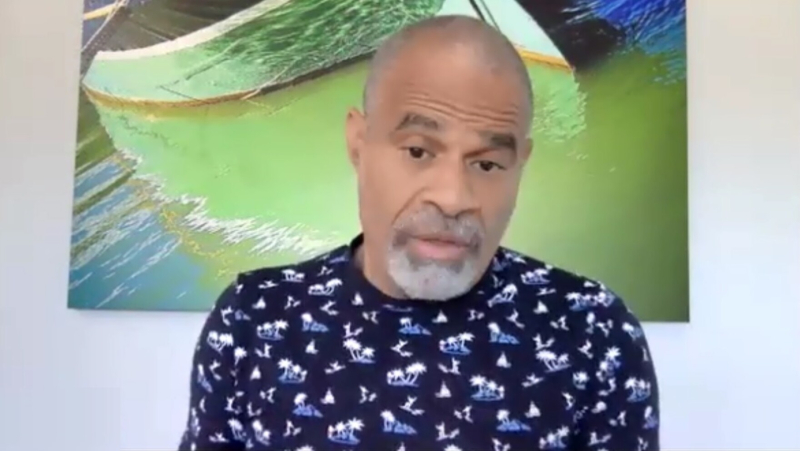 Ratleff, author of the memoir-novel Dancing to the Lyrics (Image via video still)

WKSU: Dwayne Ratleff, an Ohio native, writes about growing up Black and gay in the '60s. 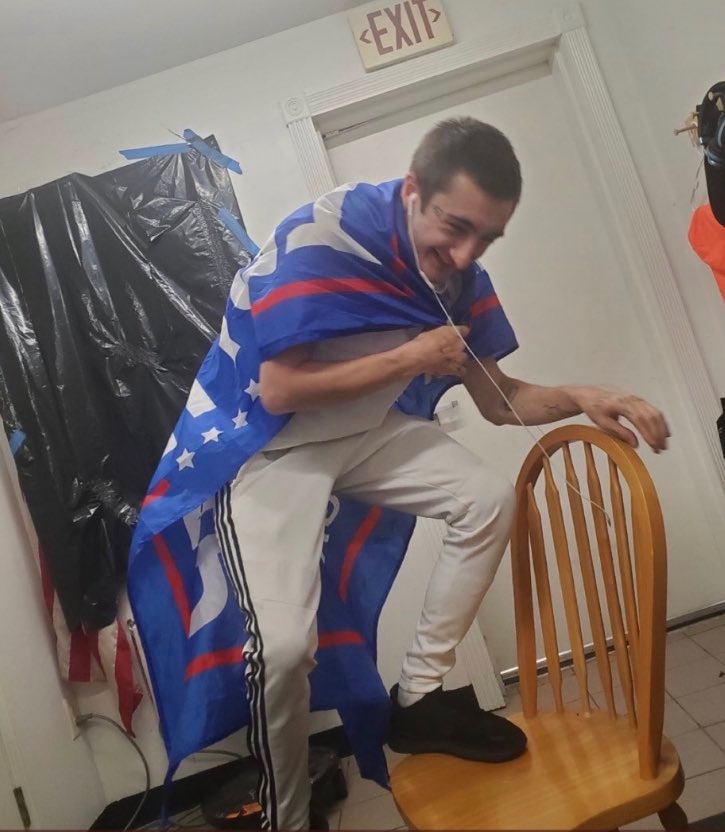 HUFF POST: Two cops were shot during a Philly fireworks display, leading to Godzilla-esque footage. Nobody was apprehended, and authorities aren't sure if the shots were intended for the cops or — I guess? — just merriment run amok.

A state senator from Rhode Island has a unique way of increasing voter turnout.

WUSF: Florida's largest teachers' union takes issue with eroding separation of church and state and wedge between educators and students driven by politicians over gender ID and sexual orientation issues:

The concern, when you hear about “don't have gay-straight alliances in our schools, don't post pride posters in your classrooms.” It is breaking down the ability of teachers to have those important relationships with students that help them succeed in learning and in life.

POLITICO: Will the end of Roe push Gen Z to vote harder for Dems — or stop voting?

SOCIALITE LIFE: Ricky Martin is denying the claims that led to the issuing of a restraining order again him.

Inclusive language is not about eliminating the use of the word “women.” (Image via Twitter)

TWITTER: Bette Midler and Macy Gray have thrown their lot in with the anti-trans folks. I think people think they're being logical in stating that trans people will never be real. They are hung up on wording more than the trans people are. Why should it bother you that trans women are women and trans men are men? It's particularly weird when gay men harp on biology and the natural order of things when the same arguments have been — and continue to be — used against us.

Considering the deck is so stacked against trans people as it is, why are so many on the left eager to given the right the wedge issue it wants? The economy has everyone feeling mean?

People surprised Bette Midler is slow or resistant on trans issues forget Bathhouse Bette was pro-gay but wasn't pro-marriage equality until well after it was mainstream. Here she is waffling. She did come around. https://t.co/g9VpccVHlV

TWITTER: It is a wedge issue, and it is coordinated. Elliot Page transitioned a long while ago, but suddenly all the righties on Twitter are deadnaming for kicks in order to get suspended and to gin up trans hate (and follows ... and to hasten our attention past the Trumper who executed six people in a Fourth of July parade). 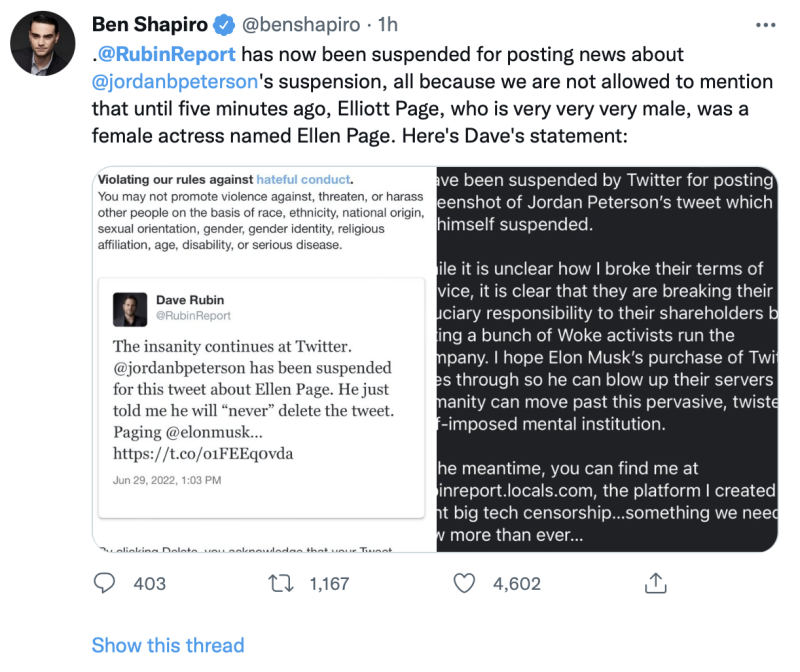 Rubin, Peterson and Shapiro — what a grotesque trio. (Image via Twitter)