Wednesday night, after a winning appearance with Fallon (though I wish Jimmy had confirmed she was lisping and facilitated the end of her grills), Madonna appeared at old pal Nile Rodgers's weekly DiscOasis event at Wollman Rink (formerly a Trump concession) in Central Park.

The private event was open to fans who'd won social media contests. I did not, but my friend Anthony did, so I got to be a late-breaking plus-one.

We met up at 6:15, followed the music and wound up near the very front of the line to get in. There was a regular line and a VIP line (manned by Madonna's day-to-day manager Sara, who did not forget her disco-era tube socks or friendly demeanor), and we began filing in around 7:45.

Inside, skate rental was free (merch was not), and it quickly became apparent that the VIP area was the only place near the DJ booth (Questlove, naturally), which was obviously where Madonna would be. So in order to get anywhere near, you'd have to ... skate.

I haven't been on skates in 40 years, but I went for it. It was extremely difficult! I did get out onto the rink and made my way around several times, spotting a lot of Madonna's supporters I've known over the years. We ID as diehards, but I wondered if I really were fated to die hard, and that night.

Maybe 80 minutes before the event was set to end (hard out at 10), Madonna emerged from a side entrance with no fanfare with David, Mercy and her twins in tow. She waved to us and sauntered into the rest of the VIP area, looking fantastic. My thought on her appearance was immediately that she was reverting to “Bitch I'm Madonna,” which I will take all day long, grills be damned. Really stunning in person.

The other flashback I had was to that Smirnoff Nightlife Exchange event. There, we were ushered in and stood gawking at Madonna dancing in a VIP area. The main differences: no boyfriend to mack on and the staff at DiscOasis were aggressively urging us to keep skating and not congregate near Madonna to take video.

Nile came out at one point and I was able to thank him for Like a Virgin. After a longtime fan poured his heart out, the Chic legend remaining humble and accessible and grateful.

This really didn't go on forever, but was the bulk of the night, and getting to see Madonna vogueing to her own song as well as to her duet with Beyoncé was mesmerizing. (The late Malcolm McLaren's “Deep in Vogue” was also played — “Everyone from that era is dead,” as she said to Fallon.)

When Nile and Madonna spoke, I was nearby. He raved that disco was his musical inspiration, acknowledging that (Queen Mother) Madonna gave him the biggest hit record he ever worked on, and she returned the love, even resting her head on his arm. 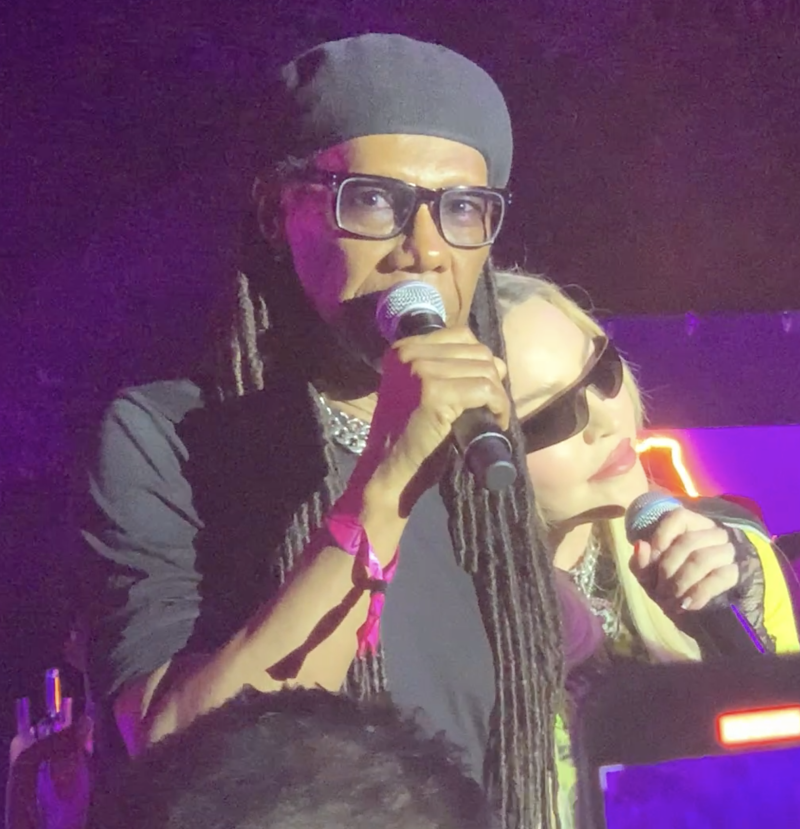 Madonna was clearly in a good mood, but how good?

Nile ended by saying fans had urged him to skate, but said he would only do it if M did. He reported she had worried about falling on her ass in front of everyone, which she confirmed, but she seemed to take up the challenge.

Moments later, Madonna emerged into the rink, aided as she unsurely made her way around, two complete revolutions. Surrounded by a few minders — one guy was pretty aggressively clearing the way and trying to run photo interference — and with her kids, she seemed determined, in spite of semi-recent hip replacement surgery that probably should have ruled this out, to skate a bit.

The days of the “Sorry” video are long gone! But it was encouraging for me that Madonna was no more adept at skating than I was. Also, in order to be able to say I had skated with Madonna, I had to, well, skate. So her risky business was my motivator. 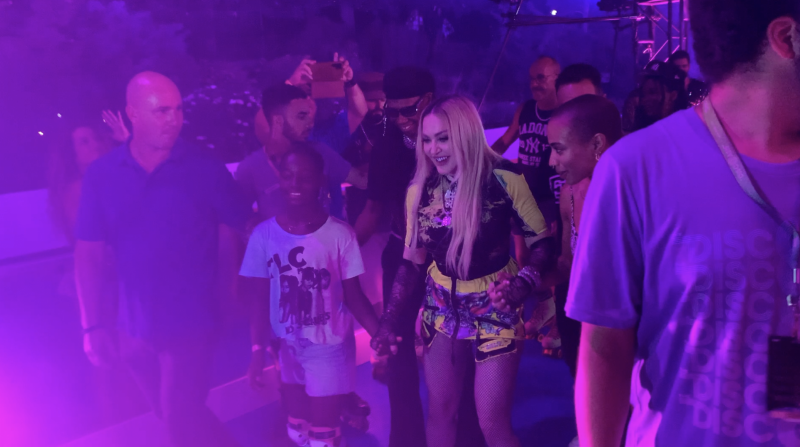 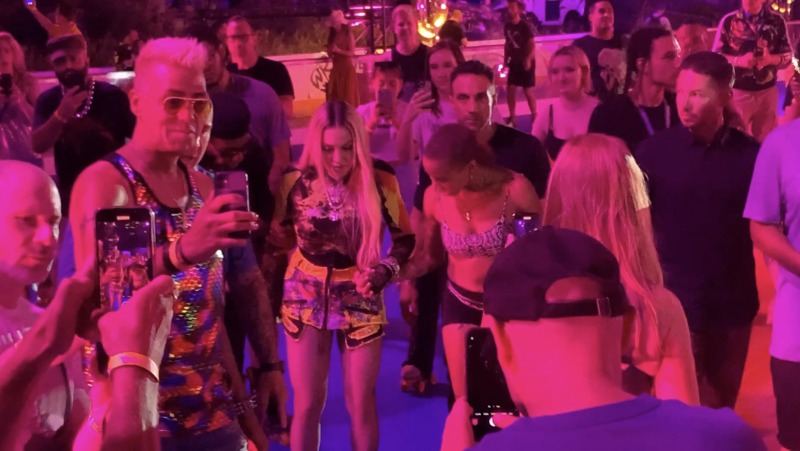 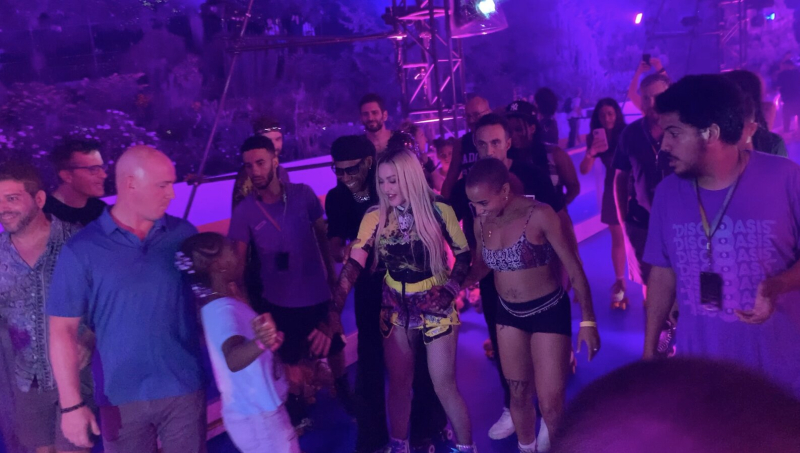 Yes, it was unreal skating so close to Madonna. Skating at all was unreal.

After, she was hustled into a central disco-ball area for glittery photos alone, with Nile and with Nile and her adorable family. 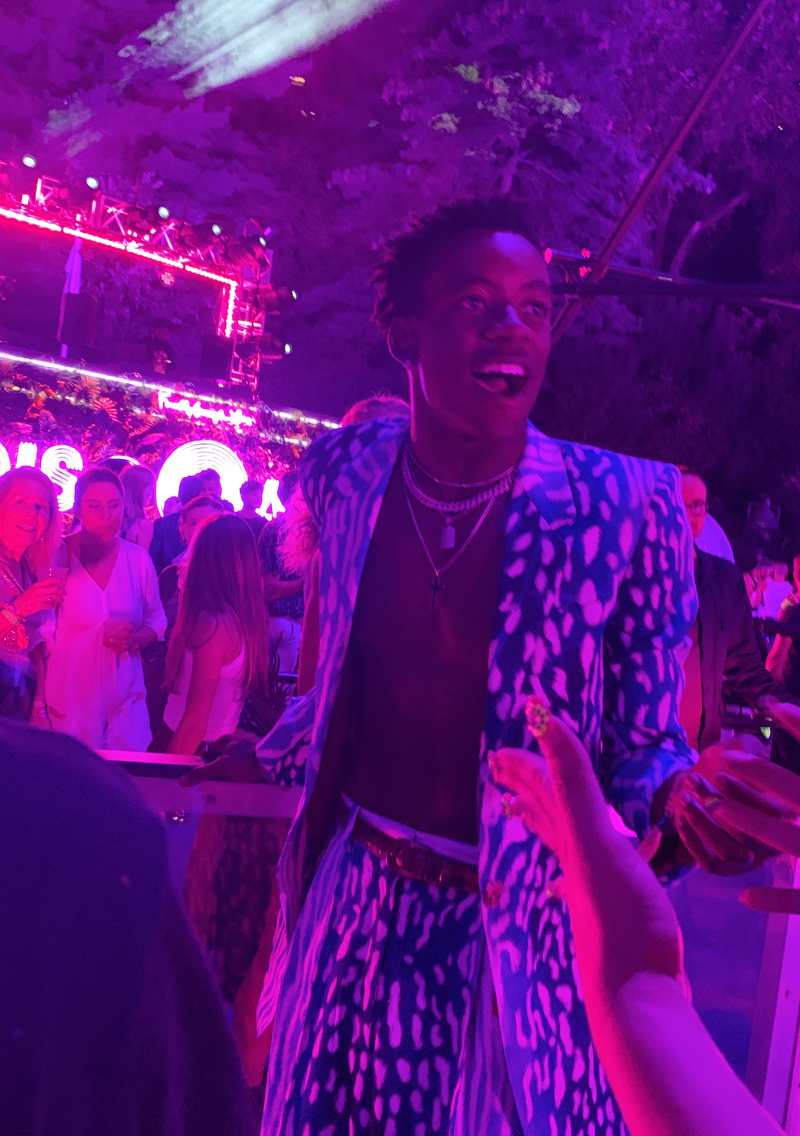 David, by the way, is very fan-friendly. He had earlier been in the rink encouraging us, posing for photos. The anti-Lourdes! 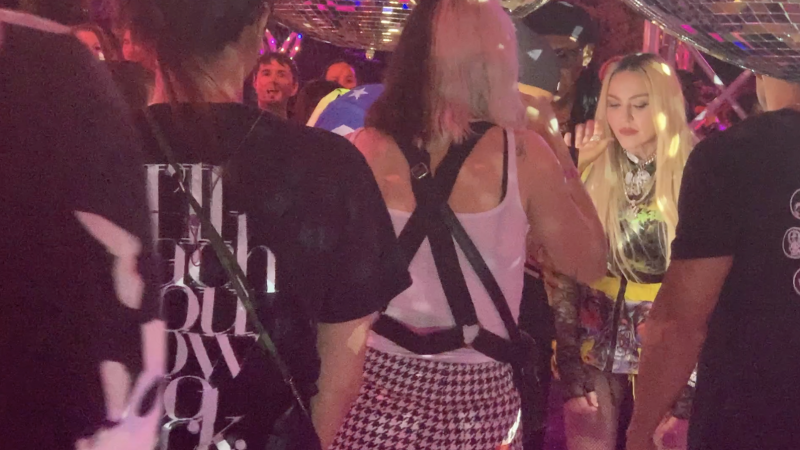 A little dab'll do ya! 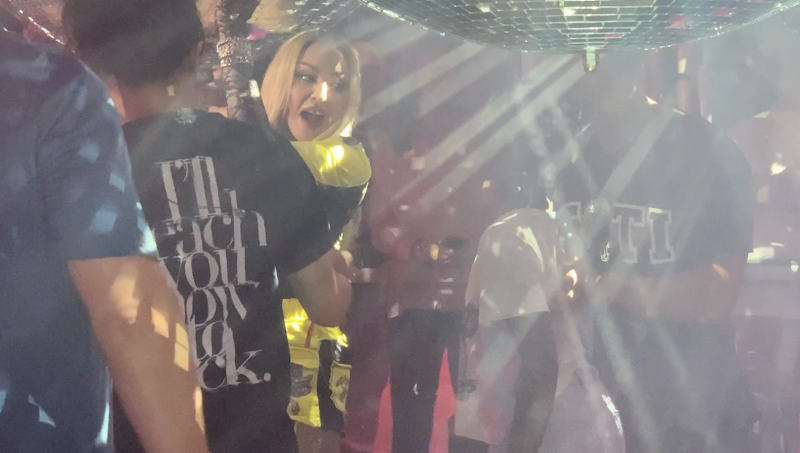 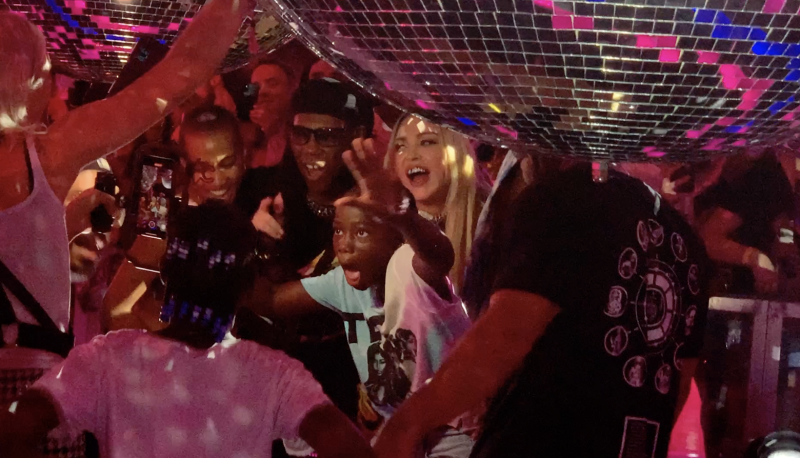 The fun part of that photo op was watching Madonna get touched up, open-air.

Madonna made her way back to the VIP section to remove her skates, and the announcement came for us to all GTFOT, so we did ... and we wound up exiting into the park directly next to the SUVs that awaited Nile and Madonna. Nile was greeted warmly and did a pic-with, signed some stuff. Madonna was MOBBED. I mean MOBBED. She made it into the SUV, where she could be seen, illuminated by pap flashes.