ABOVE: He makes some good points.

BELOW: Keep reading for a must-read memoir, Ginni on the ropes, Thiel's self-parodying dating app and more ...

As he says, we went to the moon, so we shouldn't have homeless kids. (Image via Legacy Lit)

YOUTUBE: Amazon executive David Ambroz grew up homeless, and now he's written the memoir A Place Called Home. In it, he discusses being raised by his mentally ill mother and realizing he was gay in the process. Check out the book here, and check out David on Tamron Hall below:

MSN: In her latest whackadoodle ruling, Judge Aileen Cannon has again sided with Trump — in a way that defies all legal rationale.

HUFF POST: Putin wants to summarily take 18% of Ukraine and blend it into Russia. Right-wingers are blaming the left for thinking this is a bad idea and resisting it.

DAILYKOS: Democrats continue on upward ascent in polls as we chug along toward the midterms. Meanwhile, just 35% in one poll say Trump should even be eligible to be POTUS again.

NYT: Justice Jackson is already formally on the Court, but today, she was welcomed at an investiture ceremony.

Justice Jackson takes her walk down the Supreme Court steps with Chief Justice Roberts following her formal investiture to the Court. pic.twitter.com/djzmDWcBPE 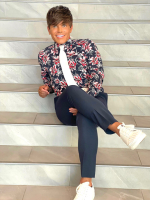 VARIETY: Mediocre opening projected for Bros, which has earned $500K so far. It sure had critics' and Hollywood's full support, plus expensive, exhaustive marketing.

FOX4KC: Ryan W aka Ryan Wesley is back! He'll be appearing on TLC's Bad Hair Day — every Wednesday at 10/9c.

TWITTER: These women want the kind of men who will slap them around, stick them in the kitchen and them heap half the blame on them when their get-rich-quick schemes collapse:

The new conservative dating app funded by Peter Thiel called, ‘The Right Stuff’ has now launched, and women describe what they are looking for in a man: “I like the Alpha-Male vibe.” pic.twitter.com/4yEGFQCUtG

TWITTER: Ginni Thomas has met with the January 6 Committee. However, she had a brainwashed glow to offer a reporter asking about her stated belief that the last presidential election was stolen. I think it's insanity that a man on the SCOTUS is married to a batshit person who believes this — and he probably does, too! There is no logic at all behind that belief.

NEW: Ginni Thomas met with Jan 6 committee IN PERSON. She did not answer my questions pic.twitter.com/5z6pypr0S9